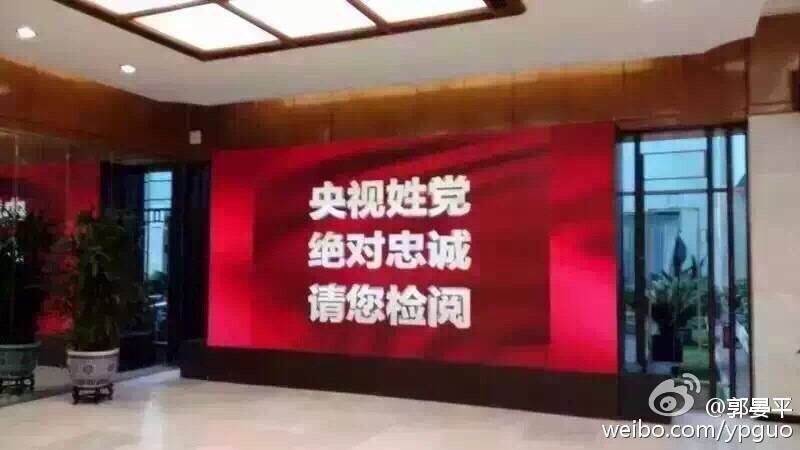 The huge banner says: “CCTV is sticking to the party line. We welcome your review with absolute loyalty.” Image from Twitter user fangshimin

Chinese President Xi Jinping made visits to three major state media outlets over the weekend of February 19, stressing to employees in a speech that all news organizations affiliated with the Chinese Communist Party and the government should strictly follow the party line in their news reports, features, columns and even advertisements.

Xi toured China Central Television (CCTV), People's Daily and Xinhua News Agency. Very quickly after his visits, one of the photos taken at the CCTV office went viral online. The photo shows how Xi was welcomed with a huge banner stating, “CCTV is sticking to the party line. We welcome your review with absolute loyalty.”

It is no secret that these three outlets act as mouthpieces for the party, but such an explicit declaration of subservience was startling, so much so that it almost sounded self-mocking. On Twitter, Chinese political dissident Hu Jia laughed at the candidness:

In a very rare moment, CCTV speaks the truth that it sticks to the party line and that it is honored to have a review from #Xitler [a combination of Xi and Hilter]. Pens, guns and swords are all security guards of the party.

However, for those who are familiar with the party's history, Xi's speech was viewed as a setback given former leader Deng Xiaoping's reform efforts of the 1980s. Deng, who was a victim of the ideology battle waged during the Cultural Revolution of the 1960s and 70s, had shaken up how media was treated in China by giving space for party- and government-affiliated organizations to run media outlets.

This liberalization was briefly disrupted by the 1989 Tiananmen protests, but beginning in 1992 the party began to commercialize media to stimulate domestic consumption of goods and culture, loosening its direct ideological control over the content to allow market mechanisms to develop. While all media outlets are still affiliated with the state and the party, fact-based reporting and market interests have become two major driving forces in the country's commercial media sector.

That's the reason why Ren Zhiqiang, a retired property developer and a party member, couldn't help but criticize Xi Jinping's statements declaring the party line being the dominant principle in media outlets’ operations. He commented on the news with a question, followed by an expression of disappointment:

Since when did the people's government change their name to the party's government? Their money comes from the party member's fee?

When all the media are working for something other than the people's interest, people are left behind and forgotten.

His posts were quickly censored, the only trace of his words being online commentary labeling him as anti-party. Most of the comments critical about media sticking to the party line were either deleted or hidden on popular Chinese social media platform Weibo. Outright dissent can only be found on platforms like Twitter, which aren't patrolled by Chinese censors.

Reading between the lines, Twitter user Westmoon believed the so-called “loyalty to the party” actually means “loyalty to Xi:

While @Zodiac4698 was struck by the military term “review”:

The point is not about sticking to the party line, but the word “review”. It implies that the party mouthpiece is similar to a military troop in an ideological battle, propaganda (lies and fake news) is a battle. Who are the soldiers and who are the enemies? The battle will be against conscience, common sense, justice, logic or even empathy. [And its victory] will be against humanity.

Badiucao cartoon: Party mouthpiece: “Uncle Xi” visited CCTV, monkeys and snakes have their organism in tears. Some are busy changing their surnames [to the party], some refuse to wash their hands [after shaking hands with Xi]. This is such a glorious moment full of happiness. #XiJinping #CCTV #mouthpiece