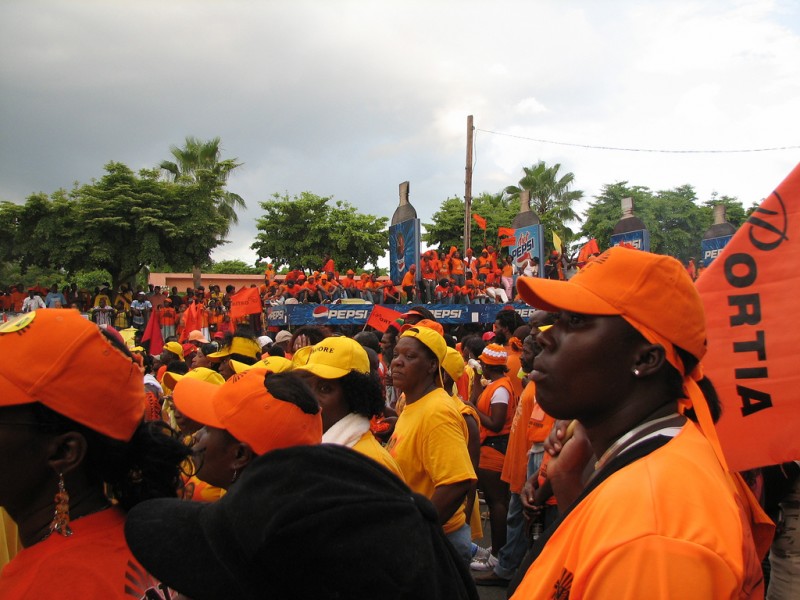 With general elections less than a week away, many Jamaicans are swallowing their disappointment at the cancellation of televised political debates and keeping an eye on party manifestos ahead of the February 25 vote.

Hopes for even one or two televised debates were finally dashed when the incumbent People's National Party (PNP) confirmed in a letter to the Jamaica Debates Commission that they would not participate in any debates, contending that there were, in addition to other matters, unresolved issues related to the construction of Opposition Leader Andrew Holness’ home.

Some media practitioners were privately expressing their wish to see an end of the election campaign, so they could report on other matters — but local blogger Kate Chappell publicly commented on the PNP's final decision:

To borrow a term coined with regards to feminist theory, this is truly making the personal political.

The refusal is being regarded as an act of fear, with people speculating that the Prime Minister is too scared to debate the Opposition Leader. She has long defended herself from the stigma of being from a poor and uneducated background. But she last week dismissed those claims, stating that she has participated in the National Political Debate before.

Firstly, the RJR Group, Jamaica's largest media house, sought to find a substitute for the debates and proposed a “news forum” on Television Jamaica, whereby each party would be questioned separately on its proposals and policies.

While the PNP appeared satisfied with this suggestion, two leading RJR journalists refused to participate on principle. Head of the Press Association of Jamaica, Dionne Jackson Miller, and radio talk show host Emily Shields (who were both panelists for previous televised debates) stood firm:

RJR's proposal lasted less than a day before a decision was taken.

BREAKING RJR cancels forum. JLP refuses to participate saying it is being positioned as alternative to debates.

On the same day, the UWI Leads group at the University of the West Indies Mona Campus, in partnership with Integrity Action Movement (IAM) For Students, were to hold a National Youth Electorate Town Hall meeting at the Rex Nettleford Hall of Residence.

Representatives of all political parties were set to attend, including the much smaller third party (National Democratic Movement) and an Independent candidate, who traveled from rural Jamaica for the event.

By lunchtime on the day of the event, university officials had cancelled the meeting and the organizers were scrambling to find an alternative venue. Although the student organizers insisted they had followed protocol, UWI were adamant that rules had not been followed:

UWI also noted security concerns and their disapproval of political meetings on campus. Ironically, however, political candidates were seen touring the campus and actively campaigning for their parties later that same evening.

At the end of the day, youth leader Sujae Boswell tweeted:

As a youth activist, it hurts to the core that students are being prevented from participating in the political process.

Today feels like 3 days compressed into one. #Jamaica is back into a time of nasty, gutter politics with shenanigans & smear

The whole country needs to take a time out.

Returning recently from overseas, regular blogger Negril Stories has taken up her keyboard again and made some cogent points:

However entertaining this debacle might have been, we cannot afford for a situation of pure chicanery to dominate another election. Jamaica deserves stringent rules and timelines for electoral events: fixed election dates, mandatory debates with fixed dates and the allowance of empty chairs, pre-scheduled campaign events, deadlines for the release of manifestos and penalties for politicians who seek to resolve their conflicts in the media, overlooking the important mediatory role of the Political Ombudsman.

Even more importantly, comprehensive financial reports and background checks on all sitting members of state and local government should be made available through the Access to Information Act. A public declaration like the one Andrew was forced to make on Monday should only be necessary in the case of a suspected discrepancy in what had been submitted to the Integrity Commission. If the media, ergo the people, have access to these documents we have the opportunity to research and the freedom to create our own concerns and are not left to rely on politicians soundbites and their lawyers’ ultimatums to form the basis of our ‘news’ reports.

Some Jamaicans as well as traditional and social media are now turning to examine the manifestos of the Jamaica Labour Party and the People's National Party, released a few days ago.

Political Ombudsman and attorney-at-law Donna Parchment Brown asserts that “only a handful” of the 63 constituencies have proved problematic, with “minor skirmishes” occurring.

However, she is most unhappy at the proliferation of “flags” in political colors erected by party supporters in some areas (specifically in the rural parish of St. Thomas), in breach of the Political Code of Conduct signed by most (but not all) candidates.

The People's National Party produced and tweeted a good info graphic of its manifesto for low literacy Jamaicans:

Yet Jamaicans always try to find some humor in every situation, however discouraging. Young professional Sean Bennett tweeted this video that he thought reflected the nature of the 2016 election “race”:

Regular blogger Dennis Jones, a retired economist with a well-developed sense of humor, included for the letter “D” of his “Lexi-con for Jamaica's next election”:

D is for debates. Well, we might as well take that word out of our vocabulary for a while, as the children did not want to play in the same sandbox, so now they’ve taken their toys away and gone off to sulk in some dark corner. I’ve said before, that Jamaica does not have a culture of mature political discussion. I would be happy to see politicians mud wrestling, and I know that betting on the outcomes would be a major revenue earner for the gaming companies and the ministry of finance.

Meanwhile, many Jamaicans not aligned to any particular party would probably echo the sentiments of this young Jamaican woman on Twitter:

This election fever has my head in a tail's spin. Whatever the outcome I pray we unite as ONE Jamaica, not divided by party line.