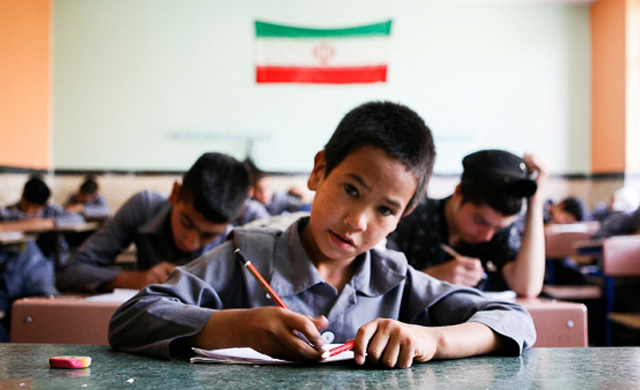 Afghan school children in Iran have been the subject of abuse and mistreatment. Photo from ICHRI and used with permission.

On January 5, 2016 Shargh newspaper reported that the principal of a school in Damavand beat five young Afghan students with a hose and left marks on their faces and bodies, telling them, “You Afghans have to leave. There are too many of you.”

Afghan students are being subjected to physical punishment and discrimination in Iranian schools, according to media reports in Iran that the government has tried to suppress.

“News about abused students in general, and Afghan students in particular, only pop up in the media by accident because the monitoring agencies and the Education Ministry try to suppress these incidents,” Shirzad Abdollahi, an expert in Iranian educational affairs, told the International Campaign for Human Rights in Iran.

Iran is host to one of the largest refugee populations in the world, with 950,000 Afghans registered in 2015, according to the United Nations High Commissioner for Refugees (UNHCR).

The mistreatment of Iranian children in schools, whether it is bodily punishment or verbal abuse and humiliation, is common in Iran, according to Abdollahi, but it is worse for Afghan children because they have fewer protections. The educational system tends to deal with these incidents without punishing abusive staff, and they try to hide it from the press, he told the Campaign.

Many undocumented Afghan children also face bureaucratic obstacles that prevent them from attending school, a violation of international law that guarantees the right to education.

An Afghan student from the city of Pakdasht was beaten and expelled from school for not paying tuition, according to the most recent report appearing January 16, 2016 in the Vaghaye Ettefaghiehnewspaper.

The parents were only able to afford one million rials (about $33) of the 2.3 million rials ($76) demanded by the school. The student was told not to come back to school until tuition was paid in full.

Following the January incident in Damavand, one of the parents told Sharg newspaper,

We went and complained to the district’s school administration and they sent an investigator to the school. But after all that, the school’s headmaster told us it was better not to drag things out further…He said our kids were being rowdy and they caused the principal to get angry.

Last year a teacher from another school in Pakdasht punished four Afghan elementary students by forcing them to put their hands inside a toilet, according to a February 10, 2015 report from Tabnaknews.

“The mistreatment of Afghan students is not systematic within the educational system but rather it’s at the school level, depending on the personal beliefs of the headmasters, principals or teachers,” Abdollahi told the Campaign.

Teachers and administrators are not sufficiently trained about children’s rights, he added.

In the short-term, there should be better monitoring of headmasters and teachers and any violations should be countered with greater firmness..Honorable teachers, who are more than a few, should stand up to colleagues who are abusive…The media should also raise awareness about the rights of children and make society more sensitive towards the mistreatment of students.

“A few years ago a group of families in Tehran’s Kan district rallied in front of their neighborhood school to stop Afghan students from enrolling there,” he said.

In addition to physical abuse and discrimination, Afghan students are also financially more vulnerable because their parents, most of whom are refugees, often earn less than average Iranians.

“Since last year, the tuition issue has been somewhat resolved and schools are no longer required to demand tuition from Afghan students,” said Abdollahi. “They may be asked to make voluntary contributions for certain school expenses, but it’s not clear what’s voluntary and what’s not.”

“Nevertheless, regulations state that Afghan students have the same rights as their Iranian classmates and no one has the right to mistreat them,” he said.

In 2011, the Education Ministry’s international affairs deputy announced that foreign students were banned from enrolling in special schools for the gifted, as well as in exemplary public schools and vocational schools, a violation of the internationally guaranteed right to higher education.

“Educational policies should not be subject to seasonal changes in taste or governments. Education is a recognized children’s right regardless of nationality, ethnicity, residency status or financial means,” Abdollahi told the Campaign.

“This right must be completely respected without any impact from changing governments and policies,” he said.