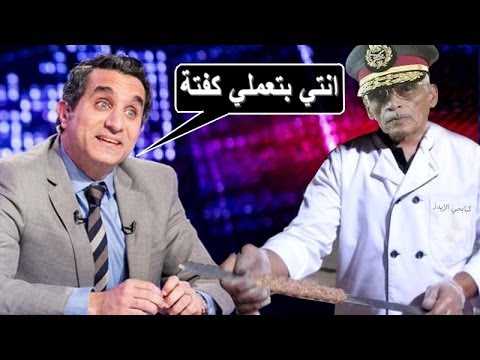 In February 2014, right before the presidential elections later won by President Abdel Fattah El Sisi,  Egyptian Army Major General Ibrahim Abdel-Atty, who is not a physician, came up with what he called a “miraculous” device that cures AIDS and Hepatitis C virus through a Kofta skewer. Yes, you read right — Kofta, the minced meat dish, served in different Middle Eastern cuisine. According to Abdel-Atty, the so-called complete cure device draws blood from the body, turns the virus into a harmless protein, then ‘feeds’ it back to the patient as nutritious Kofta!

Abdel-Atty made the announcement during a Press conference which has been circulated on video far and wide:

Not only did this declaration generate an outcry from the Egyptian medical community but also an outrageous, jointly hilarious, criticism from Egyptians on social media.

Youssef also invited his followers to send him photographs of themselves through the #Kofta_time hashtag after posting an Instagram picture with a caption that read:

@Studio79 @DrBassemYoussef waiting for the Kofta on the train from Chicago to Orland park #كفتة_تايم pic.twitter.com/h2ROazEVJH

While it is true that Egypt is a low HIV-prevalence country, there are approximately 40,000 deaths from Hepatitis C and approximately 165,000 new cases in Egypt every year, according to remarks made in July 2014 by Dr Henk Bekedam, World Health Organization (WHO) representative in Egypt. That is thousands of dashed hopes across the country.