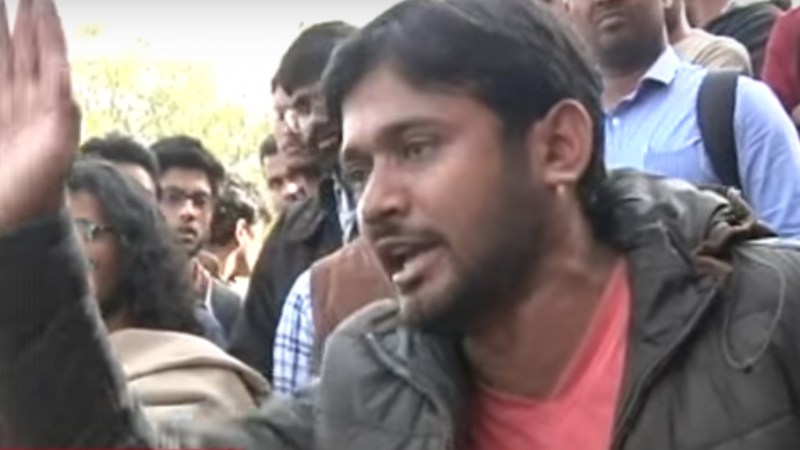 Kanhaiya Kumar, student leader of All India Students Federation (AISF), the student wing of Communist Party of India (CPI) speaking at JNU on 11th of February, 2016. Screenshot from Youtube. Click on the image to listen to his speech in Hindi.

The protests started in a public university in New Delhi but have spread across the entire country.

Now, less than a week after Kanhaiya Kumar was arrested for sedition, media outlets are calling these demonstrations the largest India has seen in over 25 years.

Everything started with a single spark set off by the arrest of Kumar, the president of a student union at Jawaharlal Nehru University (JNU), on February 12.

Kumar was detained due to the role he played in organizing a rally to mark the anniversary of the execution of a Kashmiri separatist. Slogans deemed to be “anti-Indian” were allegedly heard at the rally.

Indian Prime Minister Narendra Modi’s Hindu nationalist Bharatiya Janata Party (BJP) has accused Kumar’s group (and other similar left-wing student groups) of anti-nationalism due to their criticism of the infamous 2013 execution of Mohammed Afzal Guru, convicted for his role in the December 2001 terrorist attack on the Indian parliament.

Kumar’s arrest sparked outrage among his fellow peers and classmates at JNU where they denounced the move as a violation of his basic rights to freedom of expression.

In response, these students boycotted their classes and raised barricades in an ongoing conflict with local authorities.

To make matters even worse, India’s Home Minister Rajnath Singh tweeted shortly after the protests began that anybody who was caught shouting anti-Indian slogans, “will not be tolerated or spared.”

If anyone shouts anti India slogan & challenges nation's sovereignty & integrity while living in India, they will not be tolerated or spared

The protests at JNU eventually spread to 18 different universities across the country in the largest joined-up anti-government demonstration that India has seen since the self-immolation of a young Indian man in 1990 after the government ruled in favour of providing affirmative action for lower castes.

Students have been protesting the arrest in every form imaginable, from burning sculptures of Modi in Kolkata to planning statewide demonstrations in Odisha.

In some instances, police were called to avoid violent conflicts between different groups of protesters, while earlier this week numerous journalists and Kumar himself were attacked by a group of lawyers inside the courthouse where the hearing for his sedition charges was taking place.

This isn’t the first time that Modi’s government has come into conflict with India’s youth.

Even Indian Nobel Laureate and economist Amartya Sen has spoken out on the issue, explaining that, “the problem is not that Indians have turned intolerant. In fact, to the contrary we have been much too tolerant of intolerance.”

Throughout the demonstrations the BJP has remained consistent on the need to suppress sedition, a crime punishable by life imprisonment in some cases.

Despite this risk, student leaders and activists have continued to voice support for Kumar on the front lines of demonstrations across the nation, where their voice matters the most.

For instance, Shehla Rashid Shora, the vice-president of the JNU’s Student Union, addressed students and teachers last Sunday who were gathered together to protest the BJP’s “assault on campus democracy.”

According to Shora, who believes the arrest of Kumar speaks to a more systemic problem in the BJP Party, “the assault on JNU is a well-drafted script by the RSS-BJP which uses the charade of Anti-National [rhetoric] to silence the most vocal intellectual opposition against [the] BJP government’s anti-India policies.”

“The nation of Mahatma Gandhi cannot fall prey to RSS inflicted Jingoism,” one user commented under a video of Shora’s speech.

Others have criticised the JNU rally, however.

In response to a tweet claiming that refusing to support Hinduism cannot be synonymous with hatred, Tarek Fatah, the author of renowned books such as The Hindu Is Not My Enemy, pointed out that the JNU rally went beyond criticism of Hindu nationalism:

Are you denying that the #JNU protest was to celebrate the jihadis terrorist Afzal Guru? Perhaps you were unaware. https://t.co/sQMbm1tN4d

Chitra Subramaniam, a journalist and a UN Diplomat, echoed Fatah’s concerns and called JNU students out for taking their freedom of expression to a place that threatened public security:

Dissent is a right, but students at #JNU are selective about liberty and freedom https://t.co/yIENx89OOh #JNURow

However, there are still many students who have taken both to the streets and to Twitter to fight for Kumar’s freedom.

In fact, contrary to the popular belief that these protesters are inciting violence, ANI News reports that demonstrators on the ground have been handing out flowers:

Delhi: #JNU students protest with flowers as a mark of peace during their march from Mandi House to Jantar Mantar pic.twitter.com/Lixas6v84y

However, many teachers from the institution are backing the government backlash.

Some #JNU teachers say there is organised propaganda. ‘Lawlessness in university for 3 yrs. Glad action was taken’. pic.twitter.com/BsOthFqSYX

While some ground reports, such as those relayed by India Today FLASH, suggest that the JNU gatherings are playing host to radical elements:

Regardless of people's opinions of them, the largely peaceful demonstrations spearheaded by the JNU students have been instrumental in putting the issue of the intolerance of the Modi administration on the public agenda.

Combine that with the international attention the protests have received, and the JNU movement could prove key in reconfiguring the popular prime minister’s relationship with Indian youth, while creating a challenge to the constitutionality of the country's deeply controversial sedition laws.