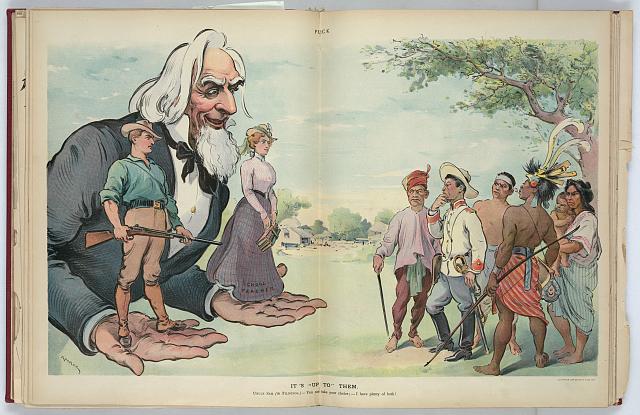 Illustration shows Uncle Sam offering on one hand a soldier and on the other a “school teacher” to a group of reluctant Filipinos, telling them that the choice is theirs. 1901. Keppler, Udo J. Image and caption from the United States Library of Congress

When the United States invaded the Philippines in 1899, it claimed that it was a mission to introduce modern civilization and democracy in the former colony of Spain. Perhaps to convince the American public that the war effort should be supported, Filipinos were represented in the press as savages who need to be educated about self-rule. This racist representation of Filipinos was reflected in several newspaper and magazine cartoons published during the late 1890s and early 1900s.

In the past decade, Filipino-American scholars reviewed these cartoons and other propaganda materials that expose how the United States government tried to hide its colonial agenda by describing the occupation as an act of benevolence.

What the cartoons failed to illustrate is that a Philippine Republic was already existing when American soldiers arrived in 1898. Furthermore, Filipino revolutionaries had already defeated the Spanish colonial forces, which ruled the Philippines for more than 300 years. The cartoons also didn’t show that the subsequent war between Filipino and American troops killed more than a million people in the country. The war ended in 1901, but it was only in 1946 when the Philippines gained its independence.

Updated Feb. 20, 2016: Puck and Judge, two satirical magazines, turned this characterization of the Philippines and other countries into illustrations. Let’s take a look at some of these cartoons, which are archived in the U.S. Library of Congress. 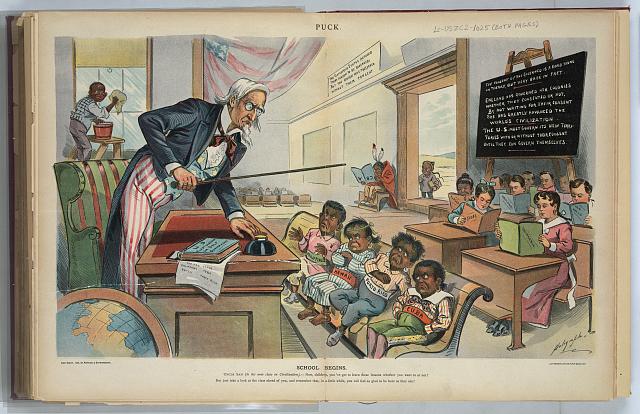 Print shows Uncle Sam as a teacher, standing behind a desk in front of his new students who are labeled “Cuba, Porto Rico, Hawaii, [and] Philippines”; they do not look happy to be there. At the rear of the classroom are students holding books labeled “California, Texas, New Mexico, Arizona, [and] Alaska”. At the far left, an African-American boy cleans the windows, and in the background, a Native boy sits by himself, reading an upside-down book labeled “ABC”, an a Chinese boy stands just outside the door. A book on Uncle Sam's desk is titled “U.S. First Lessons in Self-Government”. 1899. Dalrymple, Louis. Image and caption from the United States Library of Congress

Uncle Sam (to his new class in Civilization): Now, children, you've got to learn these lessons whether you want to or not! But just take a look at the class ahead of you, and remember that, in a little while, you will feel as glad to be here as they are! 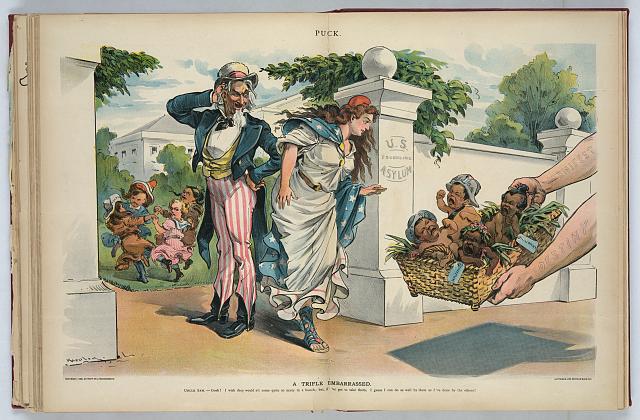 Print shows Uncle Sam and Columbia standing at the entrance to the “U.S. Foundling Asylum” as a basket of crying children labeled “Puerto Rico, Cuba, Hawaii, [and] Philippine” is presented to them by arms labeled “Manifest Destiny”. Within the walls of the asylum are four children labeled “Texas, New Mexico, Cal. [and] Alaska” playing together. 1898. Keppler, Udo J. Image and caption from the United States Library of Congress

Uncle Sam — Gosh! I wish they wouldn't come quite so many in a bunch; but, if I've got to take them, I guess I can do as well by them as I've done by the others!

The leader of the newly established Philippine Republic was described as a dictator: 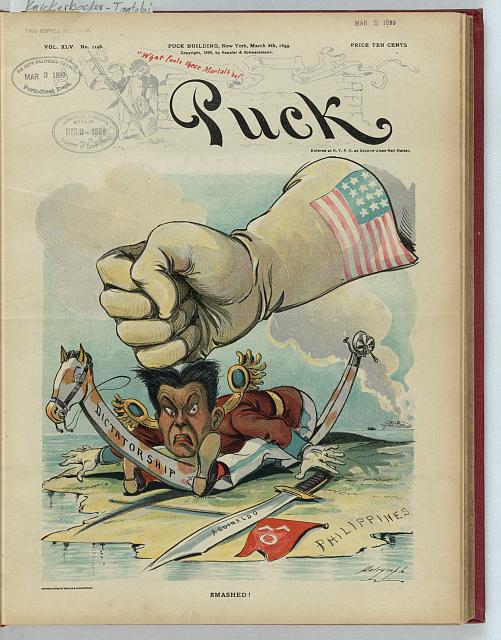 Print shows a large gloved fist with an American flag on it crashing down on Emilio Aguinaldo, who is riding on a rocking horse labeled “Dictatorship” next to a large sword labeled “Aguinaldo” on the “Philippines”. 1899. Dalrymple, Louis. Image and caption from the United States Library of Congress

The U.S. government insisted that its aim was to educate Filipinos: 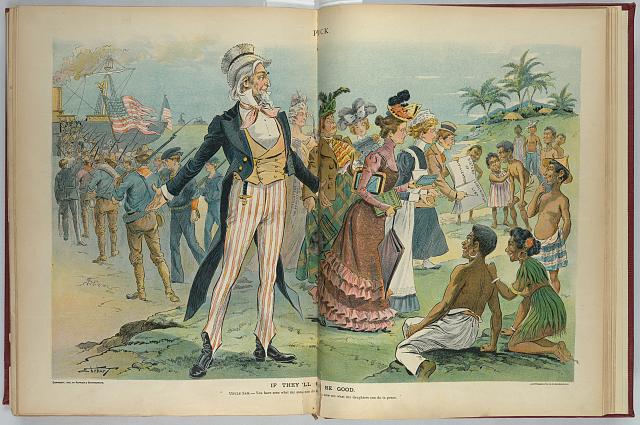 Illustration shows Uncle Sam standing at center, gesturing to the left toward American soldiers boarding ships to return to America after defeating the Spanish in the Philippines, and gesturing to the right toward a group of matronly women, one labeled “Daughters of the Revolution”, who have just arrived to educate the peoples of the Philippines. 1900. Ehrhart, S. D. (Samuel D.). Image and caption from the United States Library of Congress

Uncle Sam: You have seen what my sons can do in war — now see what my daughters can do in peace.

The next two cartoons depict Filipinos as barbarians who needed to be rescued by American civilization: 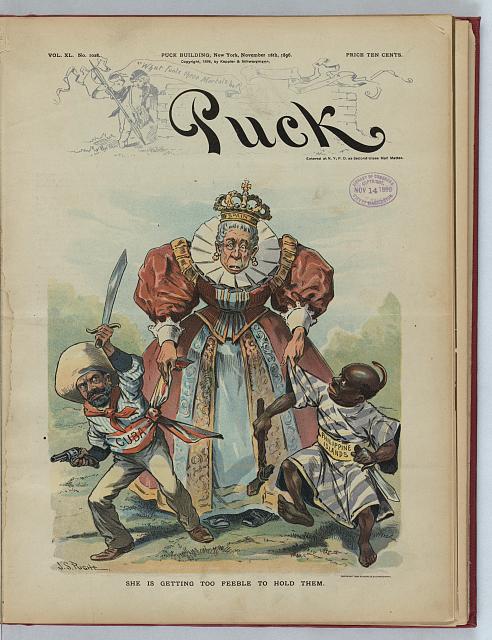 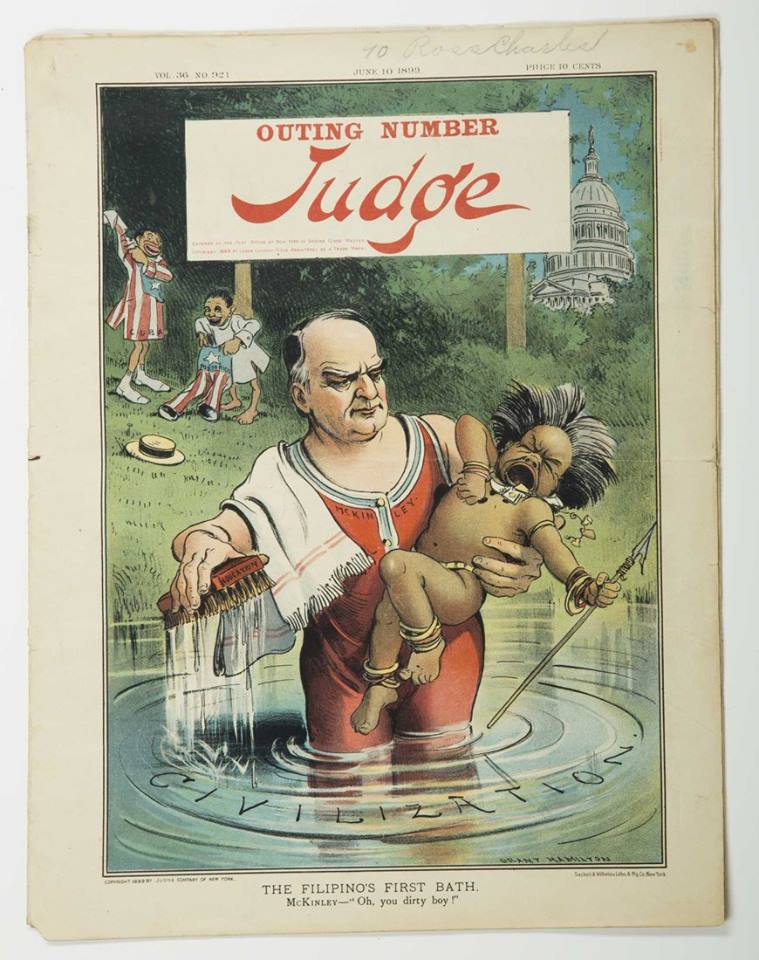 Print shows Filipinos receiving the “bath” of civilization as provided by the U.S. government. Image from the Facebook page of Berna Ellorin