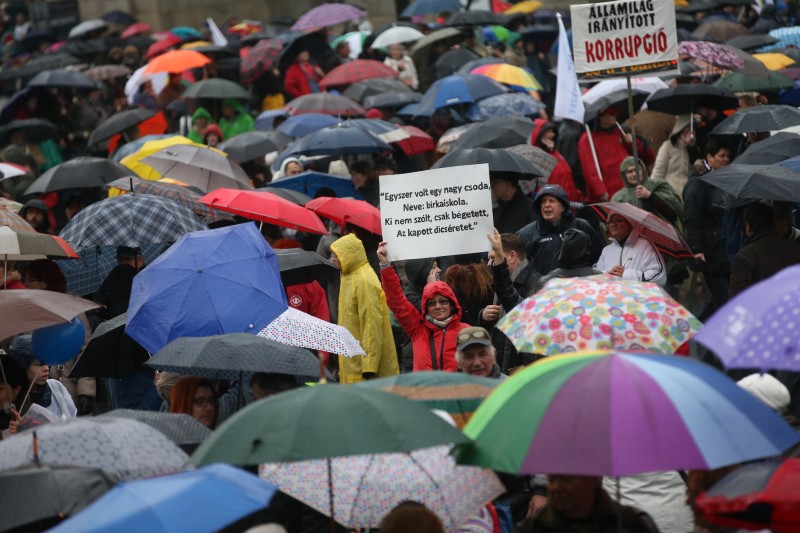 Sign reads, “Once there was a huge spectacle. They called it the school for sheep. Those got the highest accolades, who didn't speak, but only bleat.” (Excerpt from a poem by Sándor Weöres.) Image: István Huszti / Index.hu. Used with permission.

On February 13, around 30,000 teachers, students, and their supporters gathered in front of the Hungarian parliament building in the drizzling rain. The protesters rallied against the ongoing centralization of the education system, workloads on teachers they say are unsustainable, and mandatory textbooks they argue are inaccurate. Demonstrators demanded system-wide reforms, laid out in a 25-point manifesto, which they say will give teachers the respect and students the future they deserve.

The gathering on February 13 was the largest protest in Hungary since demonstrations against the Internet tax in 2014, which drew tens of thousands of people. A recent survey conducted by the Budapest-based Publicus Institute found that more than three quarters of the nation support the teachers’ cause, while more than half the country blames the Fidesz government for the declining state of the education.

“The tool for the eradication of poverty is knowledge, and those in power knowingly push our next generation into deprivation,” said the Teachers’ Union president at Kossuth Square.

Earlier in the year, a Hungarian regional newspaper published an open letter written by the faculty of a high school in Miskolc, a city in the country's northeast, which was soon signed by staff at other institutions across the country. The letter laments the wave of short-lived reforms, which it deems to be reckless experimentation with students’ future.

The text also highlights how educators are losing their right to influence the education system, as a result of forced centralization. Teachers decry that students are being buried under too many classroom hours, poor quality textbooks, and unnecessary paperwork, and they accuse the government of wanting to raise a generation that is “no longer able to ask questions.”

A second, more structured letter was published on January 26, followed by mass protests in nearly a dozen cities by teachers and students demanding the rollback of reforms.

We were there. #Miskolc #education #IndependentStudentParliament

Big protest in the rain in Miskolc. #Hungary

Leaked information from a recent party meeting suggests, not surprisingly, that Prime Minister Viktor Orbán believes external forces are to blame for inciting teachers’ discontent. Suspicions are usually reserved for George Soros, the Hungarian-born entrepreneur and philanthropist, whom the prime minister frequently blames for political unrest in Hungary and sometimes even problems throughout Europe. (Disclosure: Global Voices receives funding from The Open Society Institute, whose founder and chairman is George Soros.)

The crowd that gathered in Kossuth Square said it was homegrown problems, however, that brought them out to protest — problems that students and educators face, when trying to attend school or teach the curriculum.

Vikória Szűcs, the president of the Nursery Workers Democratic Union, spoke about low wages and the futile promises of the government, warning that “the country bleeds from a thousand wounds and it is coming crashing down. We are struggling for raises of a hundred to thousand forints [$0.36 to $3.6 USD], and meanwhile the leaders of the country earn five millions [$18,000 USD].” After her speech, the crowd chanted, “Get out, Orbán!”

“We should take responsibility together for quality civil services, so our children won't grow up to be subjects, but independent, creative people,” said a representative from the Civil and Public Servants Union.

Throughout the speeches the crowd repeated the anti-government slogans, “Traitors!” “It is time!” and “Mafia, Mafia!”

“Tens of thousands of us are here, so that our children don't suffer the same fate as we did. So that they are not forced abroad, because in this Canaan they have no place,” László Mendrey, the president of the Democratic Union of Pedagogues said, referring to campaign promises made by Orbán in 2012.

“The government looks down on us, they don't think that different professions are able to hold hands and say ‘no’ in solidarity to the destruction of education and the robbing of the country.”

A student shared his vision for a “happy, successful and cohesive Hungary,” while a parent compared attending school 30 years ago and now, highlighting the dismal facilities, crumbling buildings, overworked teachers, and apathetic students.

Istvánné Galló, the president of the Teachers’ Union closed the demonstration. She decried the systemic destruction of the education system, where children are deprived of the freedom to study and teachers have lost the freedom to teach.

The tool for the eradication of poverty is knowledge and those in power knowingly push the next generation into deprivation. How will our country look in a decade or two? The strike committee was trying to get the attention of the government, but they didn't listen. Now our patience has run out, it was enough!

Finally, the crowd observed five minutes of silence for their compatriots now enduring deep poverty, racism, and the Quaestor financial scandal, in addition to recognizing the many victims of current government policies.

Twitter user @AAH_hun posted the following video of the 5 minutes of silence, writing “With silence against Viktor Orbán: 30.000 + teachers and parents, powerful resilience against [Hungary's] illiberalism….”

Unknown to those at the square, the new educational undersecretary, László Palkovics, was holding a press conference during the demonstration. He declared that it is baseless for teachers to hold a protest, because there isn't a question broached by the unions that the public education roundtable had not already addressed.

To add insult to injury, in an interview published on the day of the protest, former Higher Education Undersecretary István Klinghammer said, “We need educators who are smart, morally sound, and who pass these values onto their students. This is why I'm pissed, when I see unshaven, unkempt faculty staff walking around in their checkered shirts.” 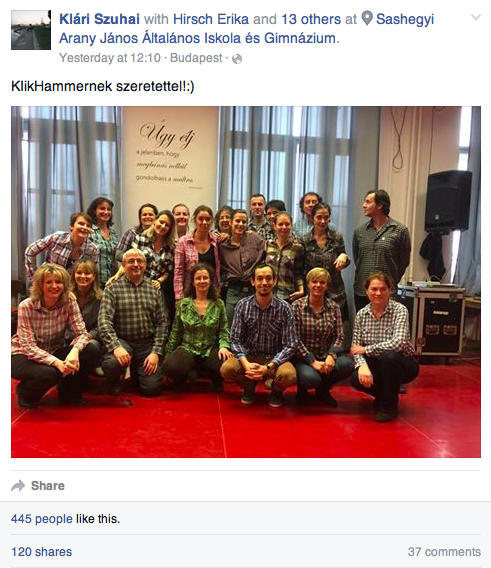