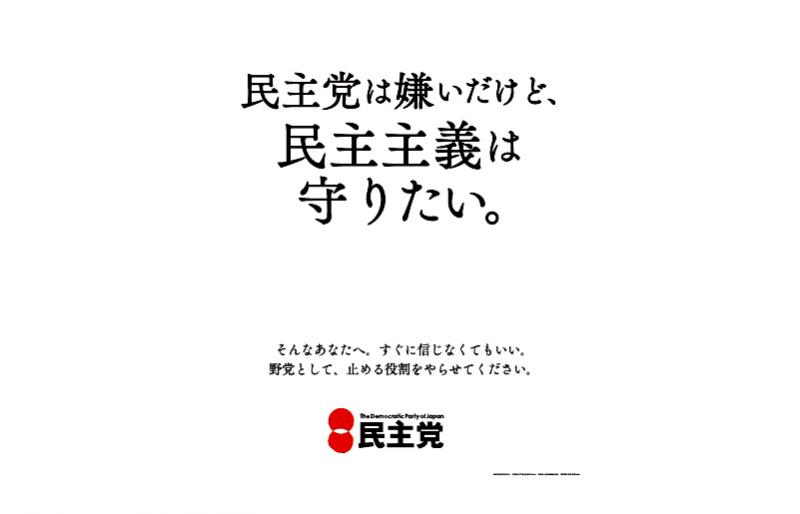 Main slogan: “I may hate the Democrats, but I love democracy more.” — Democratic Party of Japan. Image widely shared in social media.

An election poster described by some as “masochistic” points out just how desperate Japan's main opposition party is to somehow appeal to voters ahead of elections planned for summer 2016.

The poster, created the Democratic Party of Japan (sometimes referred to as the Democrats, but usually as the DPJ in English-language media), has been widely panned across traditional and social media.

The main message of the poster?

“I may hate the Democrats, but I love democracy more.”

The unspoken plea is for voters to hold their nose and vote for the Democrats in the upcoming House of Councillors (the upper house of Japan's bicameral parliament) elections.

The DPJ is also acknowledging fears that if Prime Minister Abe Shinzo and the Liberal Democratic Party are elected again in 2016, they may continue to pursue “undemocratic” policies that curtail civil liberties and militarize Japan, with no opposition to stop them.

However, many Japanese came to distrust the Democratic Party of Japan because of its oddball political leadership, infighting and perceived incompetence dealing with the massive earthquake, tsunami and nuclear disaster that struck Japan in March 2011.

You don't have to trust us right away. Just let us do our job (standing up for democracy) as Japan's opposition party.

Commenters on social media have lampooned the poster:

Who would want to vote [for the Democratic Party of Japan] after seeing this poster LOL?

Kan Naoto, a senior DPJ politician who was prime minister during the Tohoku triple disaster in March 2011, has produced a more provocative election poster:

An impressive rise, a spectacular fall

Japan's DPJ has been left wandering in the political wilderness since 2012.

After winning a landslide election and assuming power in 2009, the DPJ's win at the polls, defeating the Liberal Democratic Party of Japan (LDP), appeared to a new era of genuine competitive electoral politics in Japan.

The LDP had governed Japan almost without interruption since the end of World War II. The success of the DPJ, with its strong support in Japan's cities and progressive policies, led many to believe that Japan might finally transition to a stable two-party system

However, once elected the party embarked on what was widely perceived as several years of lackluster, ineffective government and vicious political infighting.

Public distrust of the DPJ was cemented following what was widely perceived to be a weak and confused response to Japan's 2011 “triple disaster”, when a massive earthquake, tsunami and nuclear accident wreaked havoc on northeastern Japan.

The LDP, led by Abe Shinzo, swept back to power in 2012. Since then the DPJ has struggled to redefine itself.

There are fears the DPJ itself is on the verge of breaking up, leaving Japan without an effective opposition.

However, according to recent polls conducted by national broadcaster NHK, the DPJ enjoys no more than 10% support, likely not enough to prevent Abe Shinzo and the Liberal Democratic Party from achieving the supermajority in parliament needed to radically change Japan's Constitution.

Still, in the lead-up to “double” lower and upper House elections planned for summer 2016, there may yet be an opportunity for Japan's beleaguered opposition party. A sharply rising yen and a tanking stock market have effectively put an end to “Abenomics”, the flagship initiative of Abe Shinzo's government.