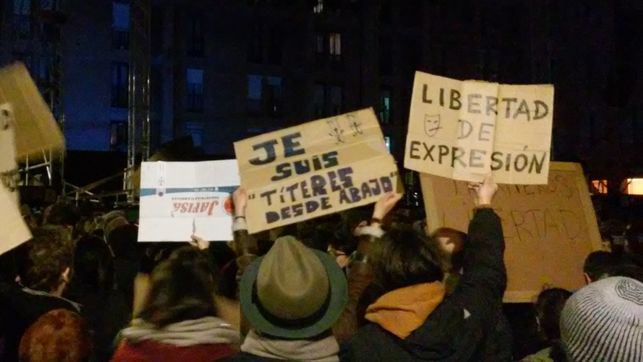 A protest rally demanding the release of the puppeteers. Photo Eldiario.es under license CC-BY-SA.

A puppet show with political content, mistakenly scheduled as children's entertainment during Madrid's Carnival celebrations, ended in “glorifying terrorism” charges against two artists, the sacking of the festivities’ artistic director, and a legal complaint accusing the judge and prosecutor on the case of perverting the course of justice.

During the Spanish capital's recent Carnival celebrations, the Madrid City Council organized a puppet show as part of the children's activities. It seems that the organizers made a mistake; they later admitted that they had not seen the play, and the story turned out to be totally inappropriate for children. Actually, the play, entitled “La bruja y don Cristóbal ” (The Witch and Mr. Cristobal) is a political satire created by the group Títeres desde abajo (Puppets From Below) for an adult audience.

Some attendees were unpleasantly surprised by the show and gave the puppeteers a telling-off, complaining about the violence of some scenes. Online newspaper eldiario.es spoke to a mother who attended the function, and this is her version of the story:

[The artists] warned the public that the play was anti-pedagogical and contained heinous, immoral and irreverent acts. […] The jokes were difficult to understand, but I did not think it was a provocation or an apology of terrorism. It was part of the plot […] The kids didn't understand anything, the whole play didn't make much sense for them.

In the story, a corrupt cop takes advantage of the unconscious protagonist to place a placard near her that read “Alka-Gora ETA” (a combination of the words “gora ETA” and Al-Qaeda) to falsely accuse her of terrorism. In Basque, “gora ETA” means “long live” or “hail” ETA, the militant separatist movement in Spain's north believed to be responsible for more than 800 deaths over the last 40 years.

The display of the placard was enough reason for the National High Court Officer to ask for the detention of the puppeteers Raul Garcia and Alfonso Lazaro, accusing them of “glorifying terrorism and committing a crime against the exercise of fundamental rights and public freedom.”

Judge Ismael Moreno ordered their detention without bail in a decision that has been described as “delusional” and “surreal” by netizens, political commentators and progressive sectors of the judiciary.

[…] Judge Ismael Moreno ignored the fact that it was a satirical play and accuses the two detainees of the crimes committed in the play. Just like that. Following this legal reasoning, Francis Ford Coppola could be charged for the crimes that happen in The Godfather.

While mainstream media criticized the play based on the alleged violence that the kids could have been exposed to, online media and people on social networks defended freedom of expression and highlighted the absurdity of incriminating the artists for fictional crimes in the work they perform.

A page called “Libertad titiriteros” (Freedom for the Puppeteers) was created on Facebook, and in a few days had nearly 23,000 followers. Many netizens uploaded photos showing messages with words that satirized the placard that led the two puppeteers to prison. On February 11, however, Facebook blocked the page with the message that it reportedly violated the social network's Community Standards or Terms and Policies.

Screenshots of some photos are still circulating on the Internet. Below is a collage of four calling for the puppeteers’ freedom and playing with the word ETA and the Spanish words marioneta (marionette), panceta (bacon), croqueta (croquette) and chancleta (flip-flop): 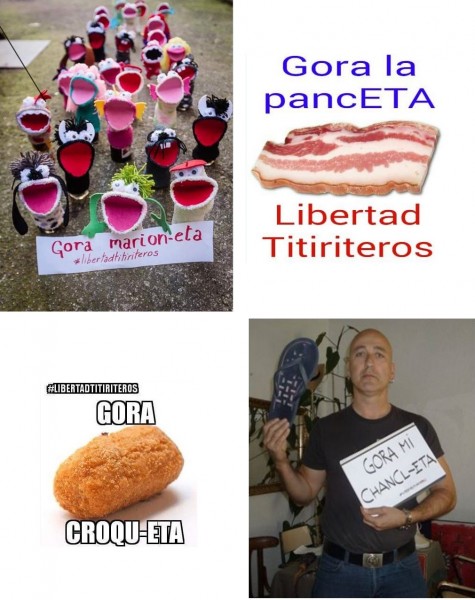 On Twitter, hundreds of Internet users protested against the detention using various hashtags, such as #LibertadTitiriteros (Freedom for the Puppeteers), #palabrasconeta (Words With ETA) or #ficciónSinFianza (Fiction Without Bail):

Were the actors playing Nazi characters doing an apology of Nazism? Did we reach a level as low as that, in this country? #LibertadTitiriteros

Images from the terrorist leadership: #ficciónSinFianza

Others mentioned that children are exposed to violent play-acting that has nothing to do with puppetry:

Let's see what [Madrid Mayor Manuela] Carmena does to stop the people who play the Holy Week Crucifixion in front of the kids from being detained.

‘Satire is not a crime’

Political platform Ganemos Madrid, part of the coalition that runs the city of Madrid, which includes the current councilor for culture (the person ultimately responsible for the Carnival festivities), has issued a strong statement accusing Mayor Manuela Carmena's of “cowardice and acceptance of the ideology which have caused economic and social deterioration and reduction of freedoms in our country” for not publicly denouncing the imprisonment of the puppeteers.

We, from Ganemos Madrid, believe that we have not arrived in government to cling to power but to carry out the commitments made to those who gave us their support, and who are now are crying out for action in defense of our civil rights and freedom of expression.

Indeed, the politicians of both sides of the aisle have not risen in defense of freedom of expression, with the exception of Ada Colau, mayor of Barcelona, who shortly after learning about the incident, wrote a comment on her Facebook page criticizing the detention of the two artists:

Clumsiness is not a crime. Satire is not a crime. In a democracy, where there is rule of law, we we must protect all freedom of expression, even the ones we do not like or agreed with.

After four days of detention and after countless protest rallies in many Spanish cities, the judge and the prosecutor backed down and decided to release Garcia and Lazarus on bail, but they are forbidden from leaving the country and must report daily to the nearest courthouse.

The case has had a strong impact not only in Spain, where even Amnesty International issued a statement demanding that the charges be dropped, but also abroad, where several media outlets have echoed the news.

On the other hand, political party Contrapoder has filed charges against the judge and the prosecutor who indicted the puppeteers, accusing them of perverting the course of justice and describing their actions as “total nonsense that should be included as part of a display on judicial errors and horrors.”