Remember When the Mayor of Port of Spain Promised to Resign for Victim-Shaming a Murdered Woman? He Doesn’t. 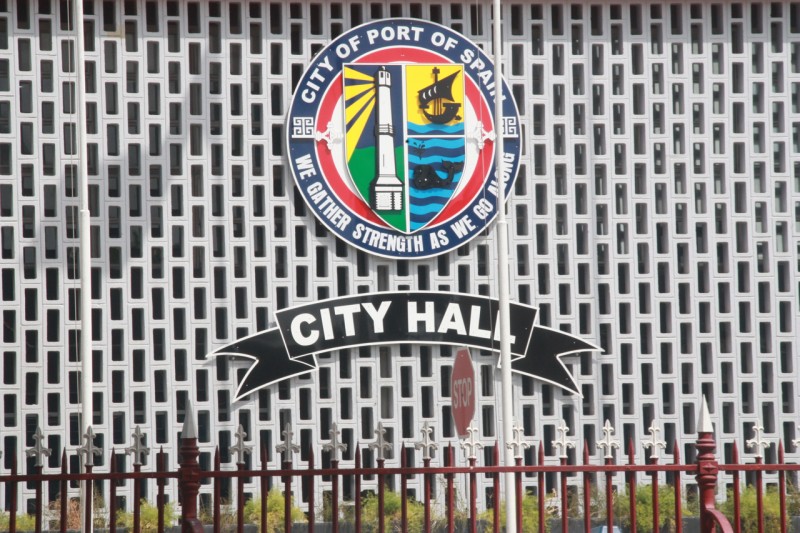 The seal of the Port of Spain City Hall. Photo: Janine Mendes-Franco.

On Saturday, February 13, 2016, Raymond Tim Kee, the beleaguered mayor of Port of Spain, Trinidad, announced his intention to resign because of backlash to comments he made about the murder of Japanese steel pan player Asami Nagakiya, who was visiting to participate in the annual Carnival celebrations.

It didn't go over well with many Trinidadians, when Tim Kee suggested Nagakiya was to blame for her own killing because of the “vulgar” bikini carnival costume she was wearing. Within days of the mayor's remarks, angry protesters began street demonstrations, demanding that he leave office.

Once the mayor agreed to resign, social media users—many of whom had spent the past few days heaping criticism on Tim Kee—welcomed his departure as the right decision. That gracious respect was short lived, however, as it appears Tim Kee is now reneging on his promise to go.

An online petition calling for his resignation celebrated initial reports that Tim Kee was leaving, calling his departure “an unprecedented milestone in our nation's history and a testament to the power of collective action.” Now that the mayor seems intent to remain in office, the petition's organisers are calling on their 10,000-plus signatories to contact their respective councillors and agitate for the mayor's removal.

Blogger Rhoda Bharath's website, The Eternal Pantomime, shared footage of the press conference where Tim Kee uttered his unfortunate comments about Nagakiya's murder, and noted that the mayor jumped to conclusions before knowing the facts, victim-shamed, failed to offer condolences and “in an attempt to deflect the need for any culpability on his part […] cross-examin[ed] a dead person.”

Bharath made the point that the mayor is costing the city of Port of Spain dearly—and not just financially:

What is especially troubling about this interview, beyond the obvious victim-blaming, is the clear dearth of ideas for handling criminal activity. Tim Kee’s entire response focuses on shifting blame, not assuring his burgesses and offering solutions. […]

She was also one of the first online to question if Tim Kee's resignation would go ahead as promised:

There is some measure of confusion abounding about whether or not Tim Kee plans to resign this week. However the process is clearly outlined in the Municipal Corporations Act in sub-sections 15, 16 and 21. Tim Kee needs only tender his resignation to them and put an end to the embarrassment that he has brought on his government and the country.

Though he has shown little evidence of it this past week, let us hope good sense shows up and prevails.

By Monday morning, February 15, it was fast becoming clear that Tim Kee was cancelling his plans to leave office. Now vowing that he wouldn't allow himself to “be crucified,” Port of Spain's mayor said he wasn't going anywhere.

Facebook user Joanne Gail Johnson said it was just an excuse to keep his job, writing:

Man up. Asking for, and expecting consequences when warranted, is not ‘crucifixion’. The use of the word ‘crucifixion’ is an emotional overstatement, and […] imposes a selfish distraction away from the call to address issues of 1. Victim blaming and 2. Solving murder and violent crimes against women 3. Prioritizing safety for all especially the elderly, women and children 4. Developing and implementing an integrated national Gender policy.

In the Facebook group “Breaking News T&T,” Sheldon Awai wondered if Tim Kee was trying to dupe the public deliberately.

Rhoda Bharath argued that a deliberate campaign to lie to the public is indeed underway:

The Council has no power to accept or reject a resignation.
It simply does not have that responsibility.
Tim Kee merely has to submit his resignation and inform them. No voting necessary.
There is now a deliberate lie to mislead the public about Council meetings and deliberations and that is beyond despicable and disgusting.
At this rate the entire PoSCC may have to step down for insulting and misleading the public.

Wired868 also shared some insights into the mayor's “attempt to outwit the public”:

Mr Live Wire can confirm—from anonymous but well-placed sources—that the Port of Spain City Corporation did not have an emergency meeting today, there is no deliberation of Tim Kee’s tenure under way. […]

As it turns out, Tim Kee’s eloquently worded offer to resign was never sent to his councillors […] who have read the Mayor’s twists and turns through the media rather than by official correspondence.

Why would Tim Kee tell everyone but his councillors about his intention to leave the Port of Spain City Corporation?

In short, Tim Kee has allegedly attempted the outwit the public. Minus, of course, the wit. 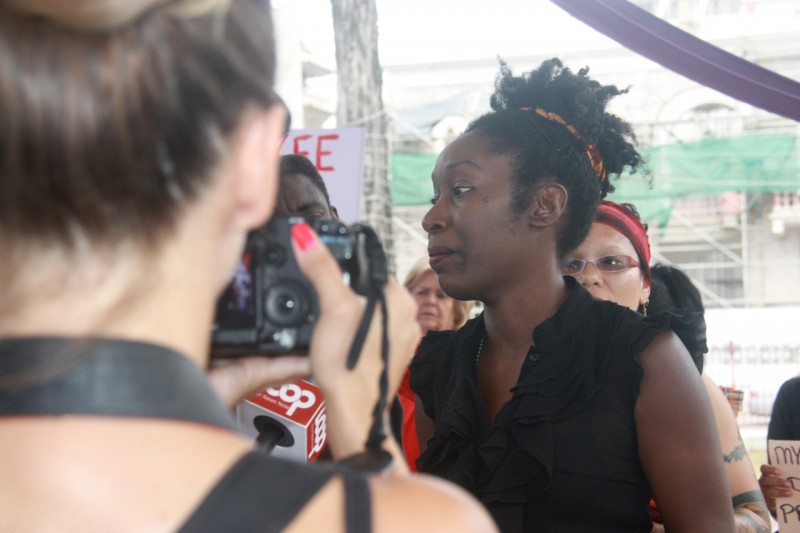 Activist Attillah Springer, one of the organisers of last Friday's protest, talks to the media. Photo: Janine Mendes-Franco.

Attillah Springer, one of the organisers of last Friday's march on City Hall, posted a strong statement of disapproval on the event's Facebook page:

Recanting with regard to something so serious shows a disturbing character flaw, and we doubt that he will maintain the previous level of trust that he held as a public official.
We are strongly concerned that the Council has as yet not made a statement on this matter and has left the public without any sense of clear leadership. […]

People who are charged with responsibility in our society owe a duty of care and must be held accountable if they are seen to devalue the lives of any of our citizens and/or visitors. This was made clear by the Prime Minister Dr. Keith Rowley, when he stated that Mr. Raymond Tim Kee’s comments were unacceptable.

The call for Mr. Tim Kee’s resignation was made by thousands of people both online and in real life, to send a message to all holders of public office that gender sensitivity is an essential part of the work they do. That this is not understood by some citizens is a further alarming indication of how disposable the lives of women are in this society.

The statement revealed that, over the coming days, the group will present “a schedule of gender sensitivity and gender-based-violence training workshops”, which they hope that the protective services and other government agencies will avail themselves of, and they even invited the mayor himself to be part of the initiative, “in spite of his refusal to demit office“.

The country's opposition leader and former prime minister, Kamla Persad-Bissessar, has called for Tim Kee's firing, but protest organiser Attillah Springer is also criticising the former government's “failure to act on a national gender policy”. She and her group demand a more progressive approach from the current administration:

We renew our call for justice for all survivors and victims of gender based violence and for the resolution of ongoing cases in police stations and courts across the country.

There has been so much back and forth that some netizens just couldn't resist having a little fun, despite the tragedy at the root of this story. Here are some of the memes now enjoying popularity on Facebook: 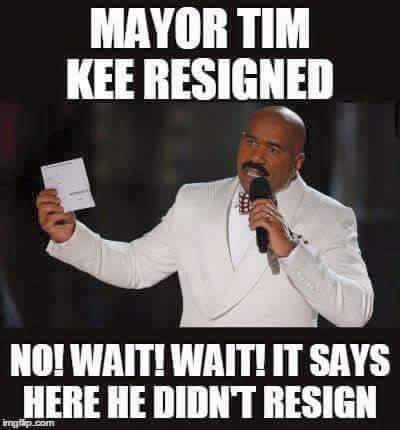 The satirical website The Late O'Clock news did not disappoint either, posting this photo: 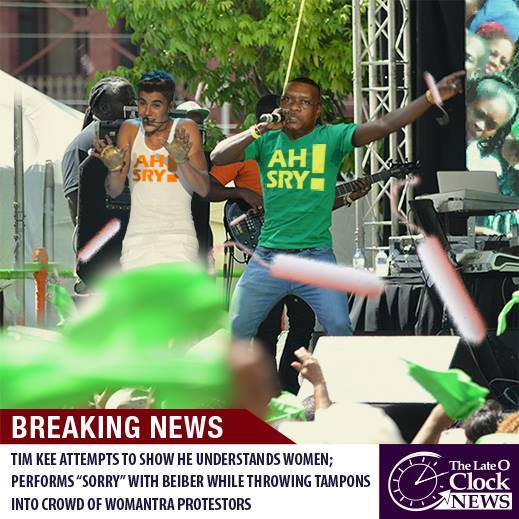 The Late O'Clock then followed up with this:

Embattled Mayor Raymond Tim Kee, has amazingly reversed his decision to resign as Mayor of Port of Spain, telling reporters that he forgot that he was living in a third world nation. […]

Tim Kee also said that while he was totally confused by the initial outrage, he later relaxed upon realizing the malcontents belonged exclusively to the intellectual and middle classes, and that their opinions do not matter because, ‘these groups are only taken seriously in the 6 months leading up to an election.’

As netizens wait to see what happens next, Wired868's Mr. Live Wire predicted that the whole thing will soon unravel:

Bless him, he thinks things are getting better now, doesn’t he?

It is like watching a toddler try to walk. Only, this time, you know you will be laughing when he topples over in a few moments. […]

Tim Kee did not resign and never genuinely made any move to do so.

Was Rowley [the country's prime minister] misled like the rest of the nation? Or was he in on one of the clumsiest attempts of misdirection ever tried?

Is Tim Kee hoping to merely confuse protesters into walking away? […]