How Syrian Activists in Raqqa Are Resisting ISIS 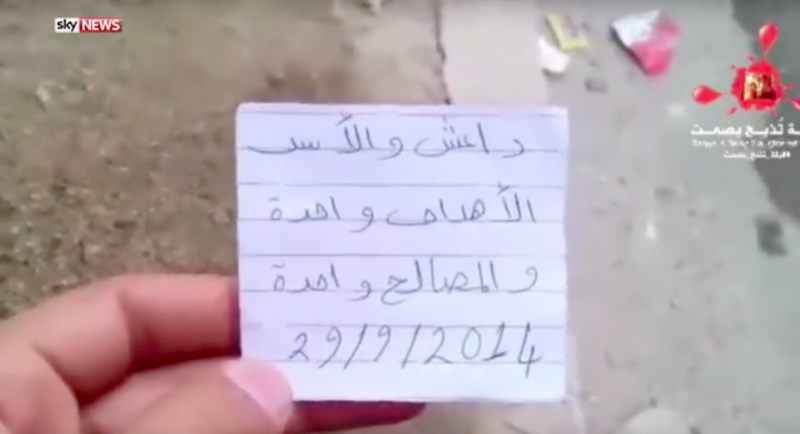 Incredible footage obtained by Sky News shows how Syrian activists are resisting ISIS in Raqqa, the city that was dubbed ‘the capital of ISIS’. The activists are part of the group ‘Raqqa is Being Slaughtered Silently‘ (RBSS), a loosely organized group of activists, described by the New Yorker as “as kind of underground journalistic-activist enterprise”, who have been struggling against both Bashar Al Assad's regime at the start of the revolution and then, when the Free Syrian Army (FSA)-held city fell, ISIS.

We learn of Abdulaziz Al-Hamza, a Syrian activist who is now in exile in Turkey due to his sympathies towards the FSA and co-founder of RBSS. Al-Hamza met another activist, Sarmad Al Jilane, also in exile in Turkey and, along with 15 other people, they set up RBSS in the hope of facilitating the transfer of images and videos taken by anti-ISIS activists still residing in the heart of the terror group's ‘capital’, which controls territory across parts of Syria and Iraq.

“People were saying that Raqqa was the capital of ISIS. We wanted to prove them wrong,” Al Jilane told Sky News. Indeed, we see footage of people resisting ISIS on a daily basis. From raising a cross at night to writing ‘may ISIS fall’ on the wall, their resistance is an unarmed one, having lost the fight against the terror group in 2014.

The man who wrote the above note was named ‘Abu’ by Sky News to protect his identity. His testimony confirms the extent of ISIS’ barbarity. Teenagers between the ages of 16 and 18 are being given financial rewards for outing FSA sympathizers. Children under the age of 16 are taken from their families and sent to a camp where they're brainwashed. “ISIS is turning children into a time bomb,” Abu remarks. Very disturbing footage then follows in which we see children pretending to be executed and a child decapitating a stuffed animal. Al Jilane then tells us how ISIS is placing children at the front lines and training them to be suicide bombers or forced to become human shields.

But RBSS is not just trying to disturb ISIS’ rule inside Raqqa. They are also trying to fight ISIS’ ideology. One example given is using a magazine bearing the same cover as the one distributed by ISIS. Only when the magazine is opened does the reader see anti-ISIS statements placed by RBSS activists.

Left: RBSS activist putting up a poster reading “No to ISIS and no to Assad, freedom for ever”. Right: RBSS activist writing “may ISIS fall” on a wall. Screenshot from RBSS footage featured in the Sky News report. 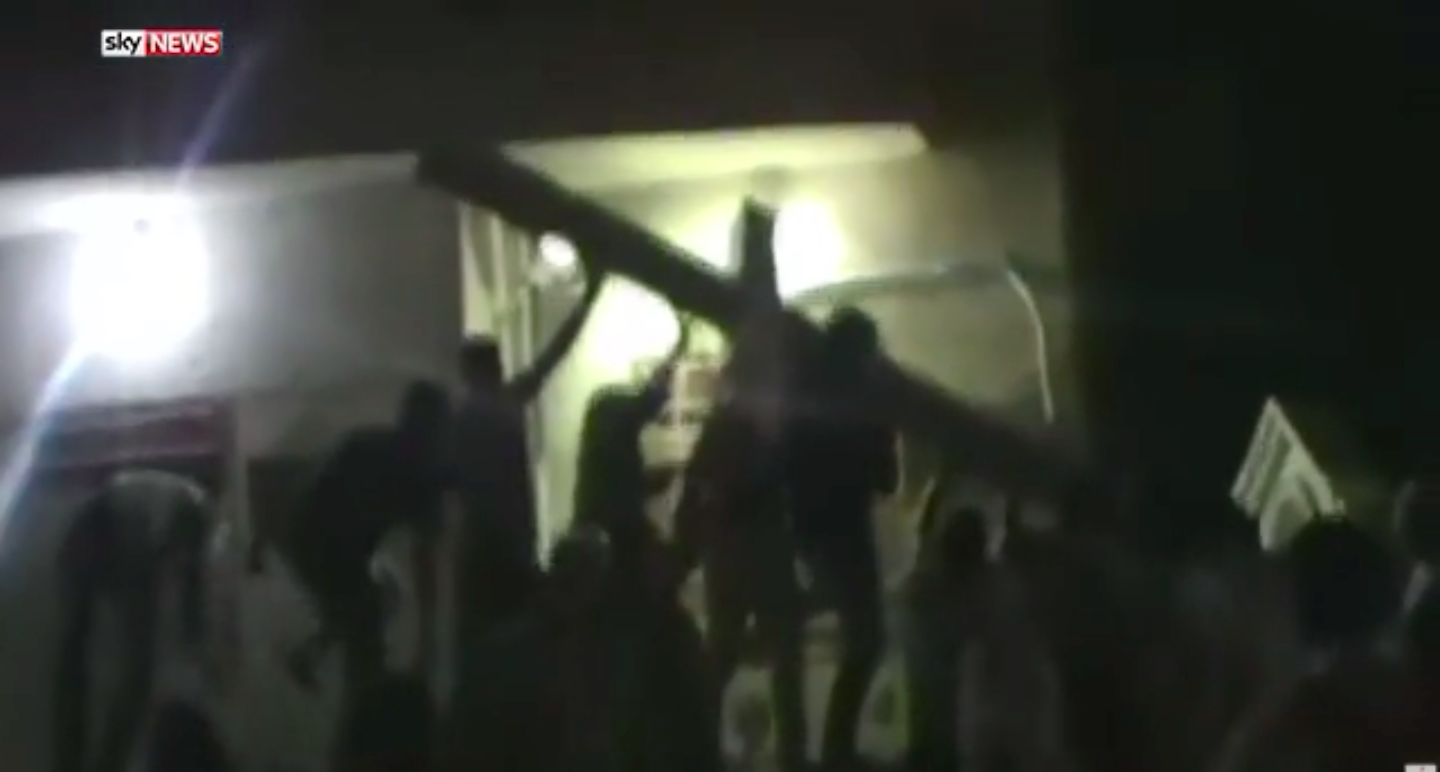 Anti-ISIS activists in Raqqa raising a cross after the terror group took it down. Screenshot from the RBSS footage featured in the Sky News report.

RBSS activists are risking their lives. In fact, some RBSS activists have already lost their lives. Twenty-one-year-old reporter for the citizen-lead Shaam News Network (SNN) Mutaz Billah Ibrahim was executed by ISIS on the May 4, 2014, after he was discovered with the RBSS logo on his laptop. In October 2015, Ibrahim Abd Al-Qader suffered the same fate in Urfa, southeastern Turkey, alongside fellow journalist Fares Hamadi. Al-Qader worked for RBSS and ‘eye on the homeland‘, a Syrian news website.

Then came the turn of Ahmad Muhammed Al Musa, also an RBSS member, who was killed by masked men in Idlib, Syria. 10 days later, RBSS activist and movie director Naji Jerf was gunned down in Gaziantep, Turkey.

RBSS was honored with the Committee to Protect Journalists (CPJ) 2015 International Press Freedom Awards for their journalism. In his acceptance speech, RBSS’ spokesperson said (extract):

I speak today on behalf of millions of Syrians who are looking for a free, democratic and united country.

I am deeply sad for my beautiful country. It is suffering greatly from regime fever and the cancer of terrorism, so greatly that I fear its spirit will melt.

We are caught between two aggressive and brutal forces. The first is a criminal regime, obsessed with power, claiming to fight against terrorism by killing children.

The second spreads evil and injustice, and paints our nation black.

Each of them considers us criminals because we are disclosing their actions to the world. Now the mere mention of the name of “Raqqa is Being Slaughtered Silently” has become a crime punishable by death.

In a July 2015 interview with the CPJ, Abu Mohammed, an RBSS founder who lives outside Syria, spoke of the risks the group is taking:

The threats come in different forms, but they happen most days.” He said that members outside of Syria, including himself, often receive phone calls and emails saying that if they don't stop publishing, they will be killed. The group’s Twitter and personal email accounts have been hacked. But the journalists inside Raqqa face the greatest risk, Abu Mohammed said. “Cameras have been placed to monitor anyone suspected of working for us. If a suspect is caught in the street, they will be killed in front of everyone.”

At the time of writing, only one RBSS member remained in Turkey.

Reporters Without Borders ranks Syria among the worst free speech offenders, at 176 out of 179 countries in its worldwide index on the freedom of press. Since March 2011, 49 journalists have been killed in Syria, eight journalists imprisoned, 17 netizens jailed and 142 netizens and citizen journalists killed.