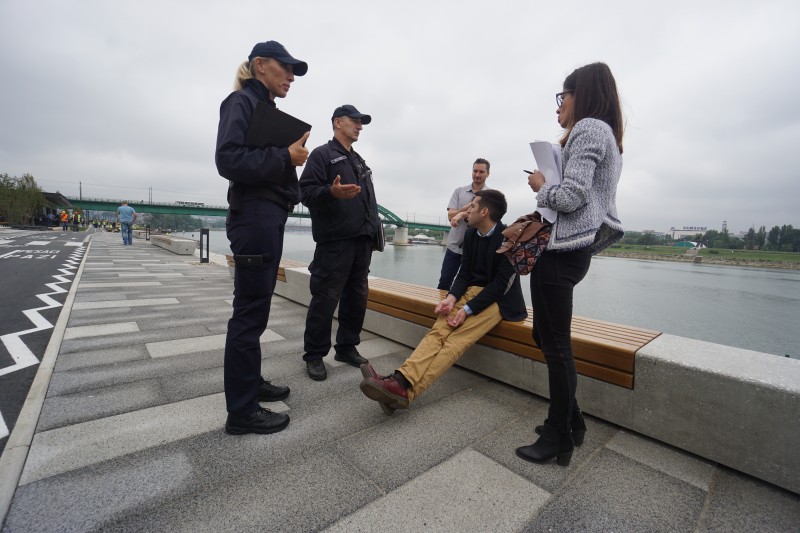 Serbian Ombudsman Saša Janković is calling for the dismissal of Communal Police Chief Nikola Ristić, in light of findings late last year that the department violated the law in separate incidents involving journalists.

The communal police are not part of the regular police force, but a body created by the local government to deal with problems related to city maintenance and community order. Janković's investigation showed that communal police officers threatened reporters from the fact-checking website Istinomer (Truth-O-Meter) and used force against its cameraman on September 25, 2015. (Disclosure: the author of this text is employed at Istinomer.)

Communal police were also found to have deleted photographs and videos recorded by a team from the Crime and Corruption Reporting Network (KRIK), confiscating their equipment on October 21, 2015.

As Global Voices Advocacy reported at the time, communal police prevented Istinomer journalists from filming an interview on the Sava riverbank on September 25, days before the official start of the controversial Belgrade Waterfront gentrification project. The officers accused the reporters of trying to film at a construction site, though video footage from the incident revealed no construction work in the area.

According to Janković, Communal Police Chief Ristić should have launched an investigation of his officers’ actions in the Istinomer case, but failed to do so. According to the ombudsman, communal police committed 30 procedural violations in just 14 minutes.

Roughly a month later, Belgrade communal police confiscated cameras belonging to KRIK reporters, deleting some of their footage. Chief Ristić personally stopped a KRIK reporter from filming the incident, and later provided false information about it, according to Ombudsman Janković.

KRIK documented this incident with a mobile phone, showing the communal police chief and his deputy physically blocking journalists who intended to ask Belgrade Mayor Siniša Mali about the purchase of 24 apartments at a Bulgarian resort by two off-shore companies that he directs. At the time, the two officers were out of uniform, which they are obliged to wear while on duty

In the following video expose published by Istinomer, KRIK reporter Dragana Pećo explained that she managed to recover the footage erased by the communal policeman who temporarily confiscated her phone. The expose includes Chief Ristić denying any wrongdoing over the phone, and also shows that he personally tugged the phone out of the reporter's hand.

Although more than a dozen members of the communal police were involved in the two cases, only one officer was subjected to disciplinary measures.

“It is not enough that the communal police officer who did something [wrong] takes responsibility, because he did that in the presence of his superiors… There was an unlawful use of force, there were threats… Many bad things were done,” Ombudsman Janković said.

The Independent Association of Journalists of Serbia (NUNS) issued a statement in support of Janković's request, while the Lawyers’ Committee for Human Rights (YUCOM) condemned the behavior of the city police in a tweet, accusing officers of using excessive force and abusing their authority.

Janković stressed that Belgrade's heavy-handed communal policing threatens the freedom of expression and the freedom of the media in a city where police power is already dangerously unrestrained. This unit, which was established around five years ago, has been mired in controversy over the years due to repeated use of force against ordinary citizens, mainly those accused of not paying public transportation fees. In the video posted above, KRIK editor Stevan Dojcinovic explains that during the October incident communal police officers serve as “a kind of private bodyguard of the mayor”, out of uniform and without identifying themselves.

A new draft law is raising fresh concerns, too. The legislation would give communal police even more powers, placing few restrictions on officers. For instance, police would be permitted to take detained persons directly to a judge, rather than to a police station for processing. The initiative could also increase the size of the police force, allowing more officers to patrol the streets in plainclothes.