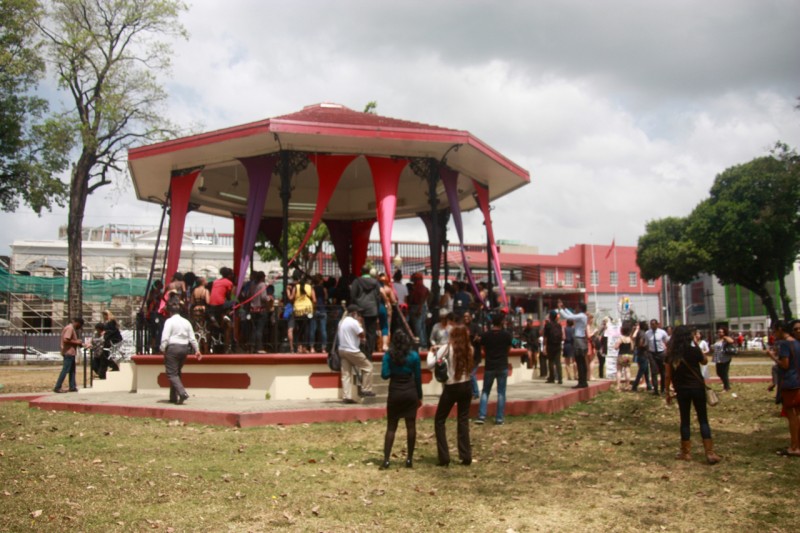 The bandstand at Woodford Square opposite the Port of Spain City Hall, where a crowd gathered in protest over Mayor Tim Kee's statements regarding the Carnival Tuesday death of a visiting steel pan player from Japan, Asami Nagakiya. All photos used in this post are courtesy of Janine-Mendes-Franco.

On Friday, February 12, 2015, citizens of Trinidad and Tobago gathered in Woodford Square [1], in front of the Port of Spain City Hall [2], to present a petition to Mayor Raymond Tim Kee. Kee's statements [3] regarding the death of Japanese steel pan player Asami Nagakiya have raised the ire of many and fuelled a discussion about an all-too-common Caribbean narrative which blames women for acts of violence perpetrated against them.

Nagakiya's body was found beneath a tree in the Queen's Park Savannah [4] — the hub of most Carnival events — on Ash Wednesday. 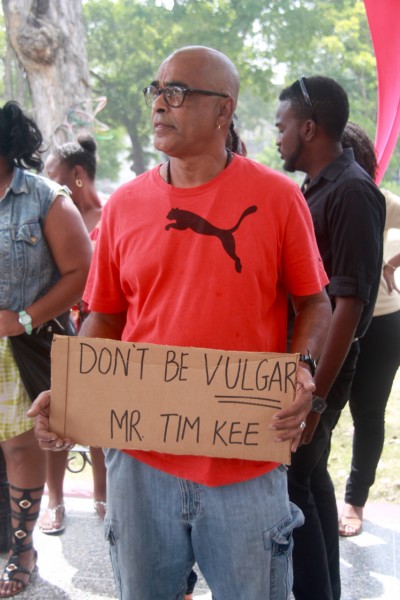 A male protestor holds a placard at the demonstration.

Dubbed “Don't be Vulgar, Mr. Tim Kee” [5], the event [5] was focused on holding men accountable for their actions instead of victim-blaming women. In a country that is plagued by violent crime and in which women often fear for their safety, there were many vociferous calls for the mayor to step down over the inappropriateness of his comments.

The group statement presented to the mayor — or rather, to his secretary, as Tim Kee was “not in office” — was addressed to the government of Trinidad and Tobago, from “concerned citizens and residents”. It began by offering heartfelt condolences to Nagakiya's loved ones, then called for the revocation of Kee's appointment:

Clothing does not cause violence. Dark streets do not cause violence. Walking alone at night does not cause violence. We are disturbed that Mr. Tim Kee did not wait for conclusive evidence of the causes of the young woman's death to make a statement, nor did he offer any sincere condolences to her family. This is not acceptable practice for someone who holds such a position. […] We do not accept his apology, which further confused the issue by stating that there are some women who agree with him. […] He contributes to a culture of sexism and gender-based violence rather than taking any responsibility of the state and government to ensure the safety of all people.

The following day, Kee announced [6] that he had decided [7] to tender his resignation over the public outcry surrounding his statements. 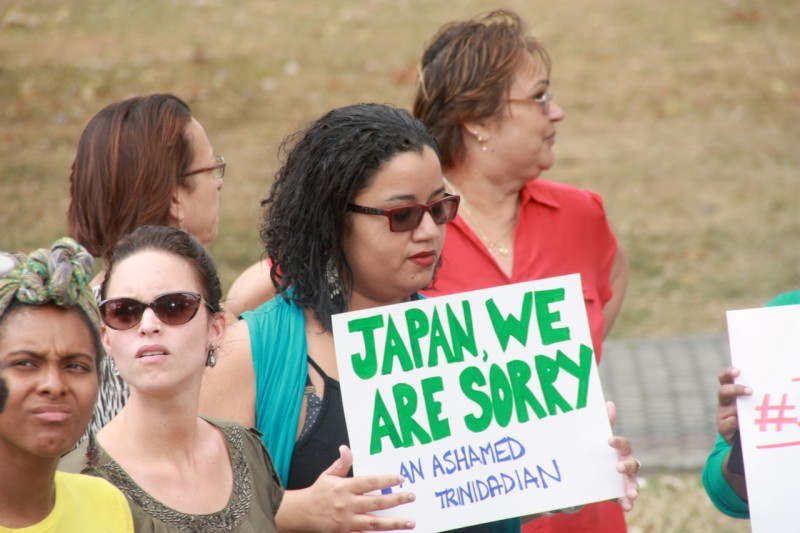 Many Trinidadians feel collective responsibility for the victim's death.

A few of these “women who agree with him” were present at the protest, seeking to disturb the discussion about victim support training and the proper education of children — especially boys — that was taking place on the bandstand. One of them insisted that had it been a local, black woman who had been killed, there would have been no protest.

Some social media users echoed this sentiment; in a public Facebook post, Anna Hernandez appeared to have missed the point of the protest when she said [8]:

I just want 2 say something is really wrong with our ppl in this country when there r so much rapes,innocent killings, robberies, child molestation , corrupt ppl in high places , inflation, human trafficking an the list goes on ….. No one comes out an protest these things , whyyyyyyyyyy . I think a lot of ppl don't think b4 they act . Come on citizens we need 2 stand up 4 our own ppl more ‪#‎selfsearch [9]‬#countryfirst# 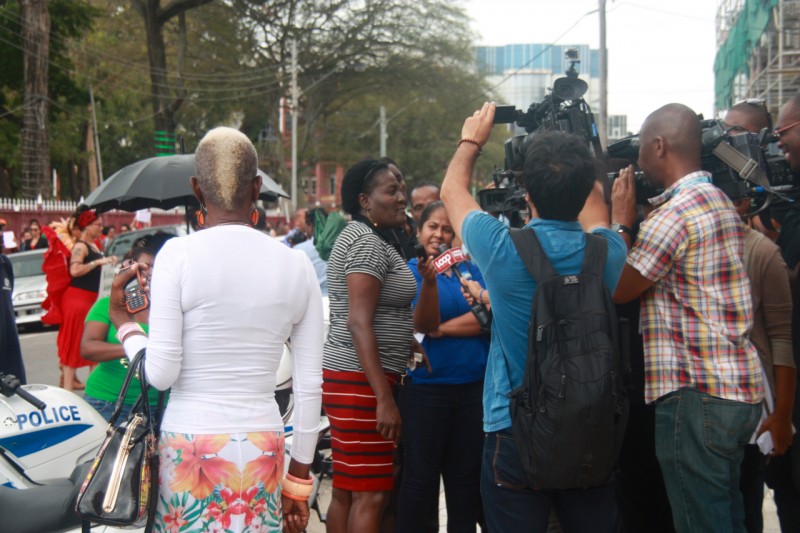 Juliet Davy (in red skirt) talks to the media in support of Mayor Tim Kee.

Juliet Davy [10], a compliance officer with the Port of Spain Corporation, under which City Hall falls, was vocal in her support for the mayor and complicit in the victim-blaming, saying that she had a daughter and would “never let her go out dressed in a particular way”. Nagakiya, like most female masqueraders on Carnival Tuesday, was wearing a bikini embellished with beads and feathers. One of the critical aims of the protest was to hammer home the point that the victim — by her attire, or otherwise — was in no way responsible for her own murder. 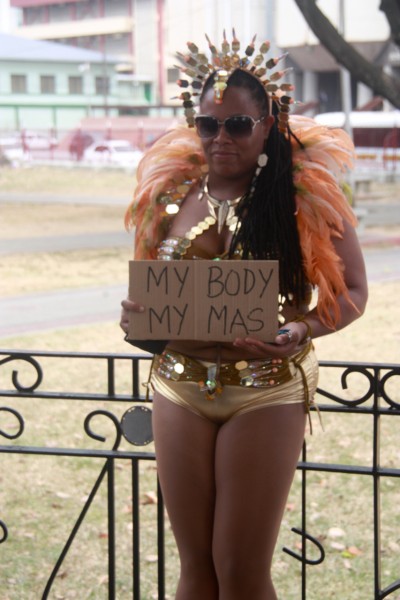 This demonstrator showed up in her Carnival costume to drive home the point that women never “ask for it”.

WHAT PRECAUTIONS COULD THIS POOR CHILD HAVE TAKEN AGAINST HER POSSIBLE AGGRESSOR SHORT OF BEING ARMED WITH A POWERFUL NON-LETHAL WEAPON? Her only guilt in this matter is not that she was negligent or unmindful of her safety but that she loved this damn savage island and its people so much to have travelled halfway around the world to participate in our culture and music, only to die like a roadkill puppy and then suffer the indignity of the unbridled buffoonery of public figures.

‘Do you really think this is going away?’

Although there were probably a couple hundred people at the protest, the online petition calling for Tim Kee's removal has garnered [12] more than 10,000 signatures. There was also a solidarity protest [13] happening at the very same time, outside the Trinidad and Tobago High Commission in in London, England. Facebook user Al Dou shared photos from the London protest and commented [14] on his disappointment over the fact [15] that Tim Kee has not yet been dismissed [16]:

[Prime Minister of Trinidad and Tobago] Dr Keith Rowley [17] do you really think this is going away? Almost 8000 signatures in the petition already. Want to wait for more international media houses to pick up the story? Oil prices down. Think of what this will do to tourism and foreign investment. 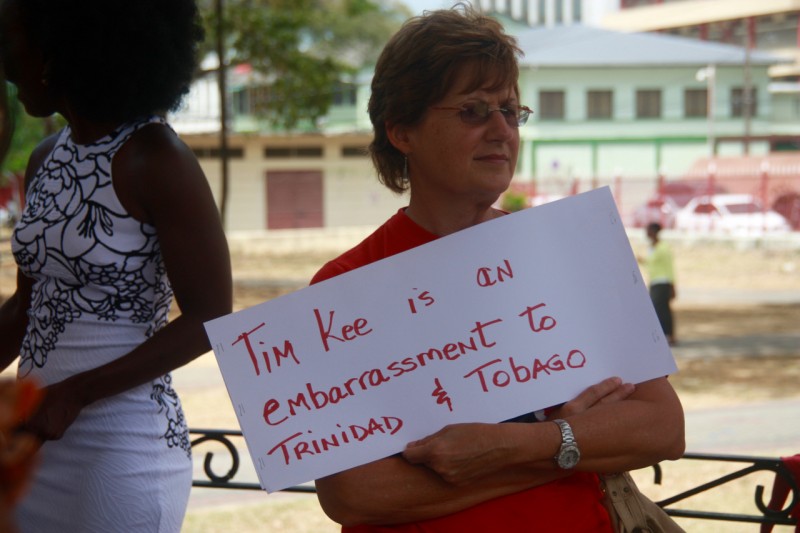 One of the many demonstrators at the protest.

One of the most impassioned speeches at the march came from former Minister of Justice Christlyn Moore [18], who admitted that she actually thought twice about wearing the costume [19] that she did during Carnival. She called Mayor Tim Kee a “frightening” man and noted the importance of the implementation of a gender policy in the country, saying that if one existed, the mayor would not have been smirking and asking his aides what the victim was wearing when her body was found. 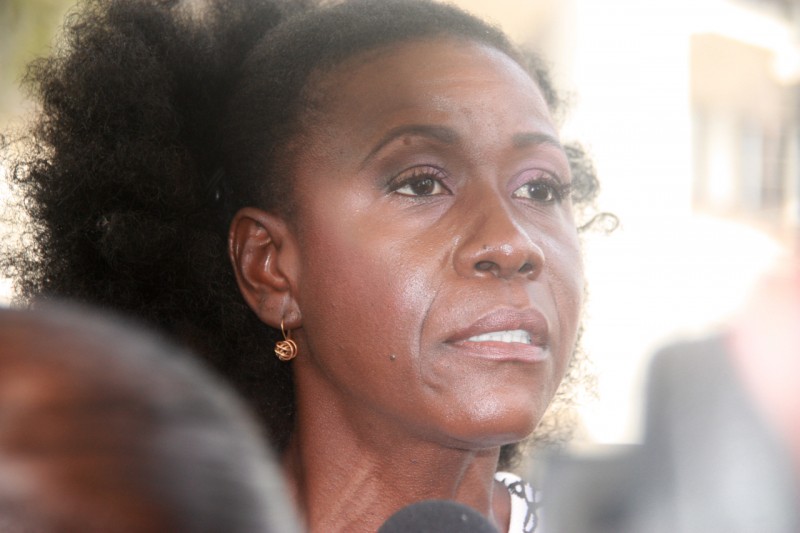 Former Trinidad and Tobago Minister of Justice Christlyn Moore, who spoke at the rally.

The issue of the murder [20] was where some netizens believed the spotlight [21] should be placed. Police since have a man in custody [22] over her death, which was caused by strangulation. Authorities have dismissed any claims that she may have been sexually assaulted. In a public post, Facebook user Trisha Thompson said [23]:

I personally think people are missing the point. This young lady's death is the major priority.

Not a mayor who stupidly made statements in haste instead of remaining quiet, which turned into a conversational nightmare.

Think guys this is about Asami and her assailant. How can her fellow friends be allowed to leave Trinidad without intense interrogation. […]

I agree emphasis should be placed on finding Asami's murder[er]. However, Tim Kee bought alive a real issue that has plagued Trinidad and Tobago for years. In our culture it okay for a man to abuse a woman! […] I’m glad to see that women are standing up for themselves and saying enough is enough.

On the protest event's Facebook page, university lecturer and activist Gab Souldeya Hosein, who was at the march, agreed [25], noting that citizens should keep the pressure on:

A man who doesn't get that murder is not a moment to lecture women about respectability is not a man who should be in office, governing women, governing the next Carnival, governing without an idea of state accountability for continued violence against women. 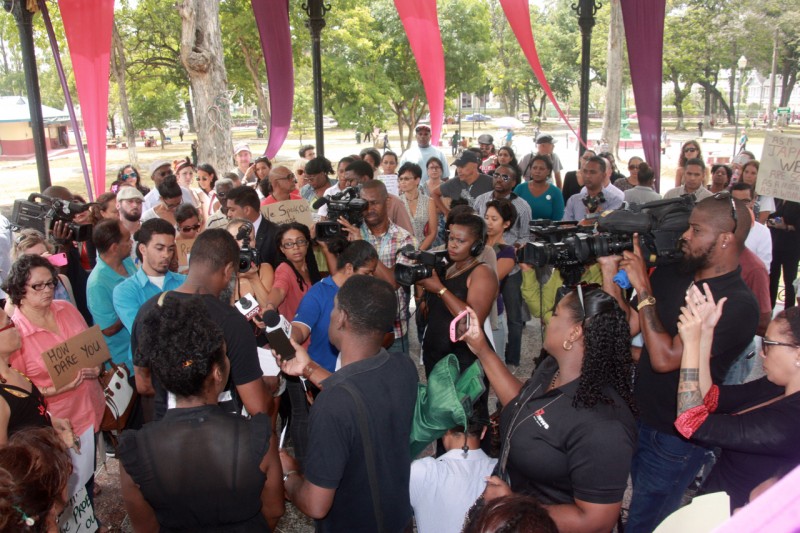 A cross section of the crowd at the protest.

Joanne Gail Johnson, another netizen who attended the protest, echoed [26] these sentiments:

It is an issue of security, not a matter of punishment in asking for Mayor to stand down. Until or unless we have the right attitude in leadership positions, violence against women will never be addressed. Whether you want to play Mas [participate in Carnival] or not, wear bikinis or not, we all want to be safe. And safety will not magically spring forth from attitudes that are in themselves subtle forms of violence ; a kind of moralistic violence. Security, security, every where we turn is security , yet , have we NO safety here? 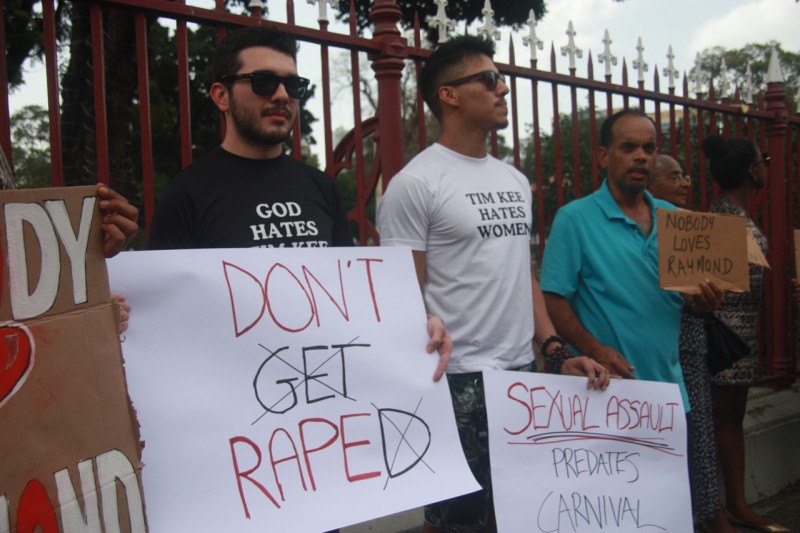 Men also made their voices heard at the march on City Hall.

‘Boys are taught entitlement to girls’

Tim Kee, for his part, was reported [27] to be “upset”, “taken aback” and at a loss as to why he is being taken “out of context”. Several men who attended the protest, however, had different feelings on the matter. One of them, Nickolai Salcedo, shared a photo [28] of a placard that said, “Society teaches ‘Don't get raped’ rather than ‘Don't rape'” and in response to one commenter, explained [29]:

On a social level, boys are taught entitlement to girls. 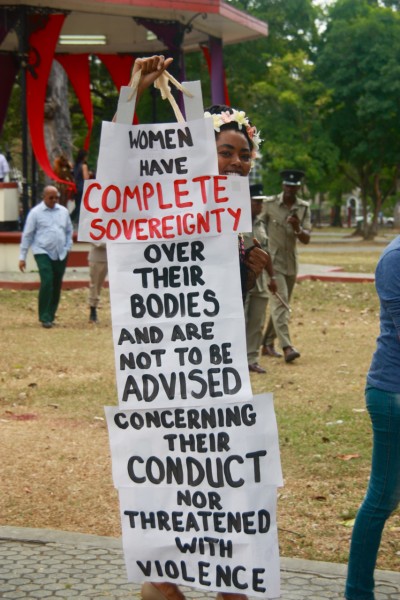 Female protestors were claiming their space as citizens of the country.

There was a plethora [30] of testimonials [31] to this effect [32] from netizens, both male and female. Denny Ablack accused Tim Kee of “propagating rape culture” [33] and blogger Amilcar Sanatan wrote quite powerfully on sexism. [34]

What pains me is that the reality of violence against women is real. In a rape culture, victim blaming appears to be logical.

The blog Square Peg (Round Hole) balked [35] at the double standard:

It’s incredible that a country that could nurture such a festival of such freedom could also harbour such antiquated, sexist and downright dangerous views at the same time, but here we are. […] We teach our daughters to be modest and blame them for what men choose to do to them, while sending the message that our sons are wild animals who are unable to control themselves. 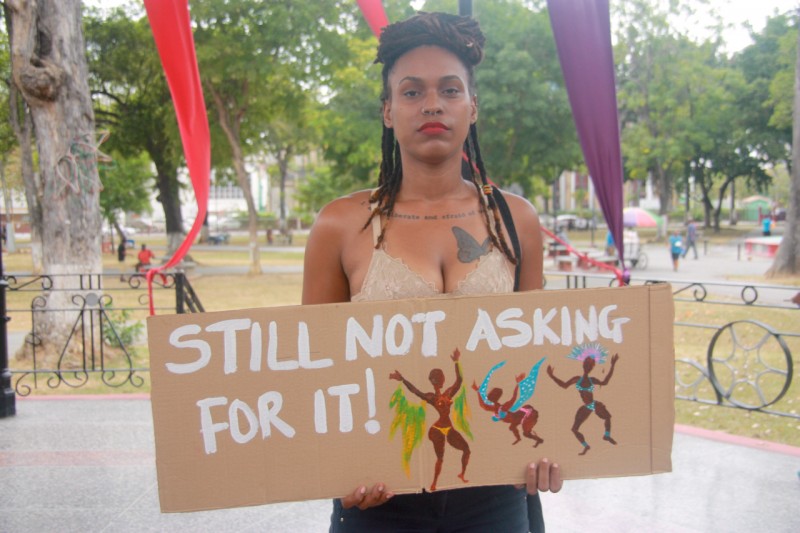 The message of the protest: Do not victim-blame.

One blogger, in an open letter to Tim Kee, schooled the mayor on the genesis of Carnival, making the point [36] that “the masquerade is not an invitation”:

You don’t have to see that in the Carnival.

But don’t tell other people, for whom the flesh is transcendent, that it’s their fault that men who haven’t been touched by that transcendence, whose bodies are still given to mundane violations, will aim to abuse them.

Don’t tell them that they’d be safer if they didn’t enjoy the Carnival for what it means, what it’s always meant.

After the march on City Hall, the demonstrators returned to the bandstand at Woodford Square and discussed next steps [37]. The organisers took heart that some of the policemen who had been dispatched to the event expressed an interest in being part of any gender sensitisation workshops they may host. It was evident that even if the movement succeeds in having the mayor stripped of his office, the hard work of education and changing a deep-seated cultural perception still lies ahead. The citizens that marched today seem up to the task. In the words of writer Shivanee N. Ramlochan, who publicly shared her personal experience and fears about being a woman in this cultural space:

Sometimes we are women who reason that the one flinch in silence is better than thirty under a fist. Sometimes, we know what concealment is worth, even while it steals other parts of us to protect our hearts and vaginas and places we've been told are too soft to be seen.
Sometimes a poui tree is not a resting place.

Should Tim Kee's resignation come to pass — there is talk that the mayor may still try to hang on to his post [38] — it would be a significant development for Trinidad and Tobago, a country in which public officials do not generally consider the ‘vox populi’ [39], and a heartening victory for its civil society.