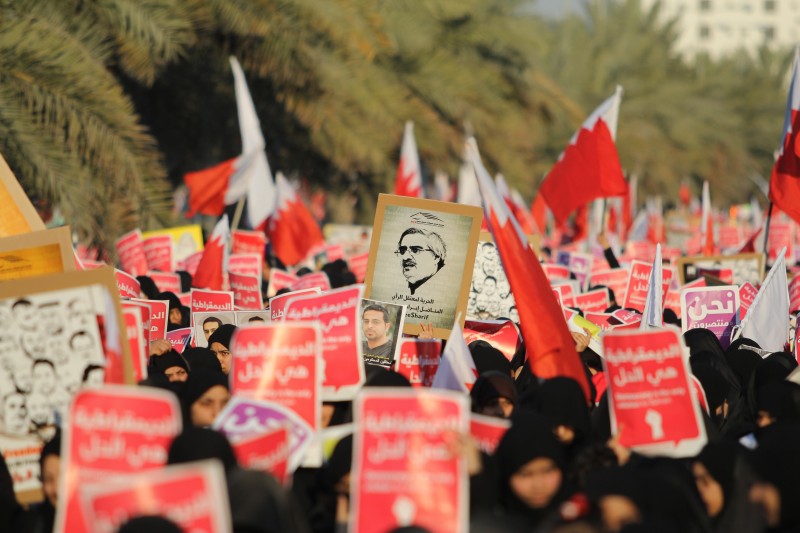 Around 300,000 Bahrainis marched to demand democracy and freedom in a protest that coincided with the anniversary of the outbreak of the revolution in the country on February 14. 2011. Photo by Sayed Baqer Alkamel. Copyright Demotix

Five years after the eruption of what came to be known as the “Arab Spring” protests that spilled over from Tunisia, Bahrain's regime continues to lock up opposition leaders, sending a message of its refusal to reform or change.

What is worst, though, is the continuing deterioration of the human rights situation in the country.

While one cannot understimate social changes brought about by the Uprising,#Bahrain is now less democratic than it was 5 yrs ago #Valentines

The small island country of 1.3 million people has been witnessing a brutal crackdown following a popular uprising, which began on 14 February 2011. Activists have been tortured, killed or imprisoned.

“Today in Bahrain, anyone who dares to criticize the authorities – whether a human rights defender or political activist – risks punishment […] Despite pledges from the authorities to prosecute security forces responsible for human rights violations in 2011, the Bahraini people are still waiting for justice. Institutions set up to protect human rights have not only failed to independently investigate or hold perpetrators to account, but now increasingly appear to be used to whitewash continuing abuses.”

Five years on, demonstrations continue, but are smaller and quieter. Today, protesting, or rather “gathering”, is criminalized by law and villages are under day-and-night security watch.

Those who say the Bahraini revolution has ended, why all this security presence in the neighborhoods?

Despite the suffocating security presence around the country, people still organize rallies inside villages, as opposition party Alwefaq tweeted:

Recent analysis from Americans for Democracy & Human Rights in Bahrain, the Bahrain Center for Human Rights, and the Bahrain Institute for Rights and Democracy found that the country's authorities have made over 400 arrests in the last four months, with 76 percent of those being unlawful or arbitrary according to international standards.

Alongside this, Kate Kizer and Michael Payne of Americans for Democracy and Human Rights in Bahrain mentioned in a column they wrote for news site Middle East Eye that at least 208 Bahraini nationals were stripped of their citizenship in 2015 alone. They also argued the world's lack of action is partly to blame for the widening human rights abuses in Bahrain:

On this fifth anniversary of Bahrain’s pro-democracy movement, it is clear that the authorities have continued to compound, rather than address, the grievances raised in 2011. They have been enabled to do so as a result of the silence of the international community, particularly the US and the UK

The US and UK have been in the spotlight for arming their small but strategic Middle Eastern ally. Paul Gallagher of the UK newspaper The Independent revealed:

Between February 2011 and September 2015, the UK has done deals with Bahrain worth £45m, covering arms such as machine guns, assault rifles and anti-armour ammunition, according to the Campaign Against Arms Trade (CAAT) organisation. The total for the three years prior to the uprising was £6m.

It is worth mentioning that Bahrain is home to the US fifth fleet, and recently, a new British military base that is primarily funded by Bahrain.