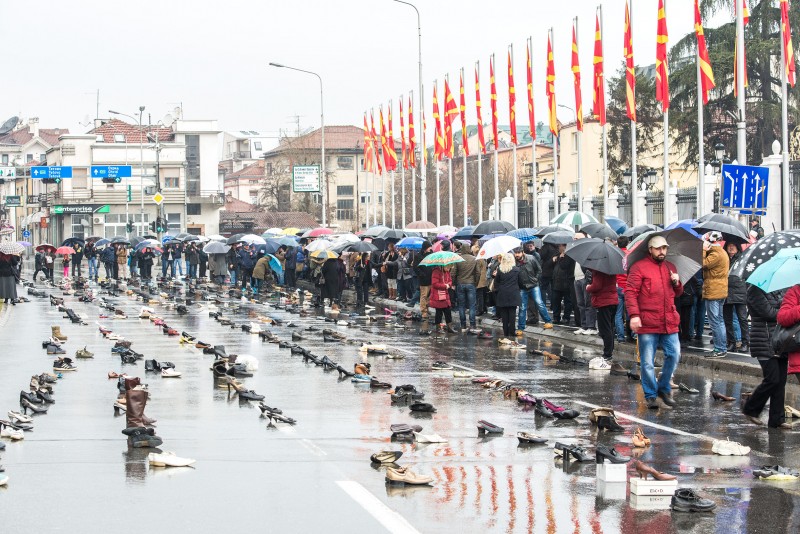 Hundreds of citizens of Macedonia placed the shoes of their loved ones who have emigrated in front of the government building in protest of authorities’ failure to improve the situation.

One of the biggest mysteries in contemporary Macedonia is simply how many people live in the country, and how many have left in search of a better life elsewhere. The law requires that the government conduct a population census every 10 years, but the last one took place in 2002, which set the number of inhabitants to just over 2 million. In 2011 the government stopped the census mid-way, without providing a reason why. When in August 2015, 46 organizations reminded the public about that issue, neither the government nor the ruling parties responded. Instead, pro-government media intensified their ongoing campaign of defamation and hate speech against civil society.

Information from the World Bank claims that over 600,000 citizens have left their homes in the past 10 years. For perspective, that’s approximately 25 percent of the population in Macedonia. Regardless of the preciseness of that figure, it is unarguably common for Macedonians to have a friend, a cousin, an ex-lover who is living abroad.

An ‘attempt to insult and humiliate the diaspora’

Macedonia is not a war-torn country, but times are tough for the Eastern European country. The unemployment rate is somewhere between 25 and 30 percent; youth unemployment approaches 50 percent. The average monthly salary is 350 euros (about 390 US dollars), but more than a half of those employed receive not more than 200 euros. Macedonia leads Europe in poverty and unemployment.

But the crippled economy is not the only reason people leave Macedonia. According to some reports, the environment has become so politicized and so dominated by the ruling political parties (VMRO-DPMNE and DUI) that political allegiances can influence a person's ability to get hired. One young man blogged his experience of, as he put it, having to join VMRO-DPMNE to get a job.

While the ruling coalition publicly ignores the “exodus” issue, parts of its propaganda machine have been also trying to rationalize it. For instance, one of the most prominent government apologists Tanja Karamisheva-Jovanovska (who is a state university law professor, legal expert on call for TV talk shows, radio host, columnist, and also an appointed state functionary and representative to a European Council's advisory committee)  wrote a column arguing that the reason for emigration is not the economy, but “spiritual emptiness, frustration over personal inadequacies, and the feeling of lack of love within their families.”

Many affected citizens saw this as an insult, commenting under the hashtag #Каракамишева (the columnist's surname). US-based United Macedonian Diaspora condemned her remarks as an “attempt to insult and humiliate the diaspora.” 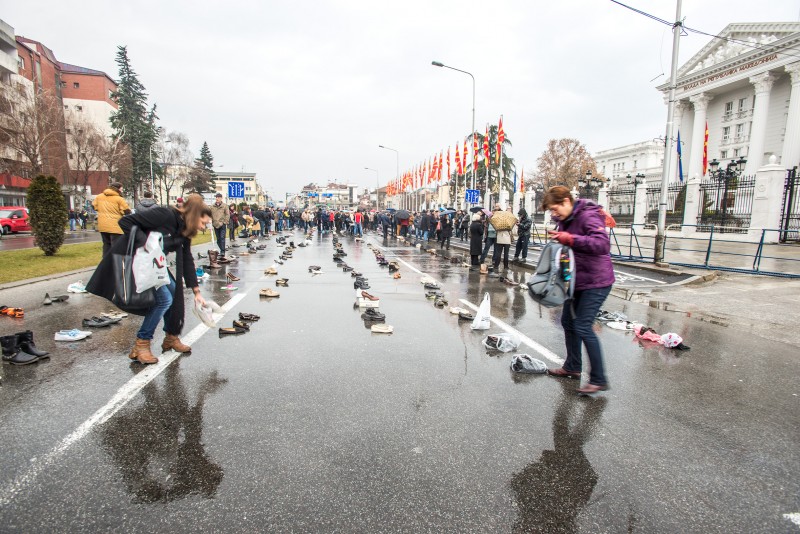 Citizens leaving the shoes of their loved ones in front of the government in Skopje. Photo by Vancho Dzhambaski (CC BC-NC-SA )

Those were the reasons why on February 13, 2016, activists from many NGOs, under the banner ”We deserve better“ called upon citizens to bring the shoes left behind by their friends and family members who emigrated from Macedonia and line them up in front of the seat of government.

One of the organizers was the co-author of this article, Vasko Lazarevski. He added his personal account:

It was raining, and we thought that only a couple of dozens of people will show up, but, people kept coming and coming with shoes in their hand, placing them on the asphalt. Pretty soon the street was covered with shoes left behind by their owners. The scene was sad. We only have short time to make things better, to keep our youth here. To make everybody understand: We deserve better.

Organizers also uploaded footage of the protest, under the title “Fatherland, I love you like old shoes” (a quote by Cervantes):

The protest also had a humanitarian aspect. After drying and sorting, the gathered shoes will be donated to refugees who are passing through Macedonia on the way to the relative safety of Western Europe, with the help of NGO Legis.