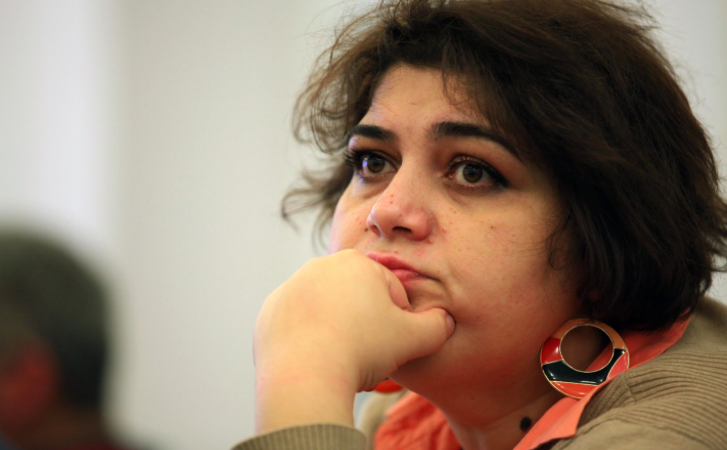 This story by CONNECTAS  [1]was originally posted on their website and republished here under our content sharing agreement.

In Latin America, little is known of Azerbaijan [2].

Perhaps some recall this Caucasus country as the sponsor of Atlético Madrid, the successful Spanish football club coached by Argentinean ex-football player Diego Simeone [3]. On the team’s strip, the country's name was accompanied by the slogan “Land of Fire.”

But behind this advertising slogan hides a dark reality.

Azerbaijan, a former Soviet country with remarkable oil and gas reserves has been controlled for decades by the Aliyev family.

It was Heydar Aliyev [4] who led the country into independence in 1991 before passing passing power to his son Ilham in contested elections following his death in 2003. The country has become a kind of family estate, where criticizing the government means taking a serious risk.

The latest victim of this vampire-like regime is investigative journalist Khadija Ismayilova [5], sentenced last September to more than seven years in prison on charges of embezzlement, tax evasion, illegal business activities, and abuse of power.

Most international organizations have no doubt that the sentence is political — a warning to those who dare criticize abuses of power in the country.

Ismayilova, who was born in the capital of Baku in 1976, worked for numerous local media outlets and managed the local bureau of Radio Free Europe/Radio Liberty for two years.

She is one of the most prominent reporters of OCCRP (Organized Crime and Corruption Reporting Project) [6], a prestigious network that supports various journalistic efforts in the former communist world.

Obsessively, she exposed official corruption, particularly in the inner circle of President Aliyev. She uncovered lavish contracts and found properties belonging to the boss’s children and wife.

She also showed that the Aliyev clan controlled gold mines, airlines, and cell phone companies in the country, among other businesses.

One of Ismayilova’s most scandalous revelations has a Latin American connection.

As the daily newspaper La Estrella de Panamá reported [15], there is an ongoing conflict between a British mining company working in western Azerbaijan and the community of Chovdar, which fears the exploitation of subsoil resources is affecting the rivers that supply the town and its people.

What was not known was that the Aliyev clan controls part of the gold and silver mine through three companies in Panama headed by Leyla and Arzu Aliyeva, the president’s two daughters. This is one of several Panama-based companies, whose affiliation to the family was uncovered by OCCRP [6] and Ismayilova.

The first attacks against Ismayilova began in 2012, when a website published an intimate video of her and her partner in an effort to attack her for “immorality.”

Instead of backing off, however, she showed that a telephone company employee had illegally installed cameras in her home.

Her fearless attitude infuriated those in power. In October 2014, a politician sued her for defamation and two months later, authorities imprisoned her for allegedly inciting a colleague to attempt suicide.

Two months later, Khadija was charged with embezzlement, tax evasion, and abuse of power. Her trial began on August 7, 2015 and just three weeks later she was sentenced to seven years and a half years in prison. Critics decried the trial as a farce.

But Ismayilova isn’t the only one. According to Reporters Without Borders, 11 journalists are imprisoned in Azerbaijan [22], where the organisation describes “a real harassment of the media.”

Meanwhile, Amnesty International reported that the conviction was based on “fabricated charges” and shows the regime “has intensified its brutal crackdown on political activists, journalists, human rights defenders and, in short, anyone who dares to criticise [it] publicly.”

But it won’t be so easy for the Azerbaijani government to silence Ismayilova. Before her sentence, she warned, “Yes, I'll be in jail, but the work continues.”