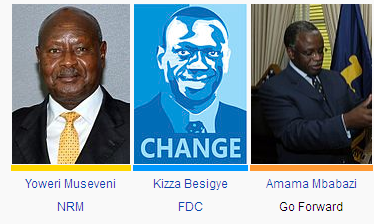 Uganda goes to the polls on Thursday, February 18, to elect a president amid fears of election-related violence [2]. President Yoweri Museveni, [3]who has been in power since 1986, is seeking a fifth term. (There are no presidential term limits in Uganda.) The main opposition candidates are Dr. Kizza Besigye [4] from the Forum for Democratic Change, who is running against Museveni for the fourth time, and Amama Mbabazi, [5] an independent candidate from the GoForward advocacy group. Both men are Museveni's previous allies, before he dismissed them (reportedly for harboring presidential ambitions).

Other candidates are Abed Bwanika [6], Benon Biraaro [7], Venansius Baryamureeba [8], Joseph Mabirizi [9], and the only woman running for president, Maureen Kyalya [10].

Ugandans will also vote in parliamentary and local elections on the same day.

Below is a brief Twitter guide for updates, news, analysis, and reports related to Uganda's elections this month: