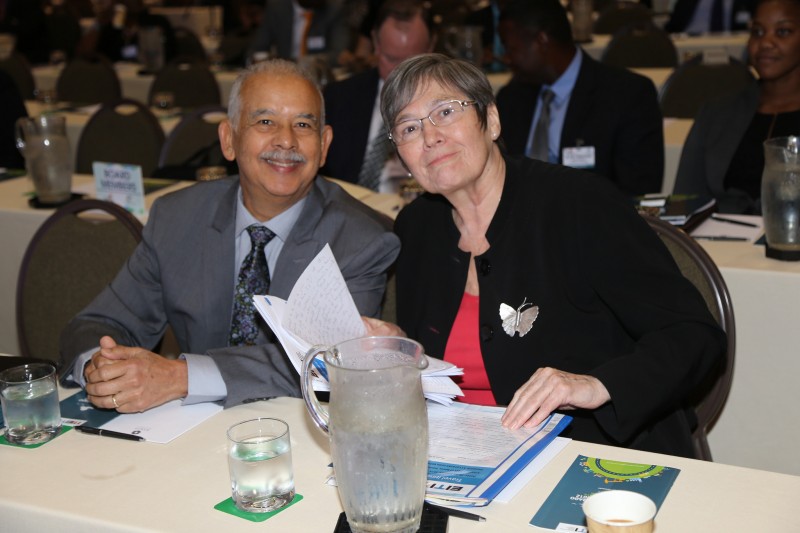 Clare Short, chair of the EITI, with T&T EITI Steering Committee Chair Victor Hart, at the energy conference. Photo by The EITI, used under a CC BY 2.0 license.

Ever heard of the EITI? Neither did I before my stepfather, Victor Hart, became chairperson of its multi-stakeholder group Steering Committee in Trinidad and Tobago. An acronym for the Extractive Industries Transparency Initiative, the EITI seeks to bring transparency and accountability to the exploitation of a country’s natural resources. Its mission is to help ensure that the derived revenues due to governments from companies who are key players in the extractive industries are correctly paid — rather than lost through corruption or mismanagement — thus protecting the inheritance of future generations.

Between December 2015 and January 2016, the 49 countries implementing the initiative held elections for the appointment of a new EITI International Board (2016-2019). Hart was elected as the director for Region 6 — Europe and the Americas — comprising, in addition to the Caribbean twin island republic, Norway, Albania, the UK, USA, Peru, Colombia, Honduras and Guatemala. It is the first time in the EITI's 13-year history that a representative from the Caribbean has been elected to the international board. Elected to serve with him as alternate director is Maria Isabel Ulloa, Colombia's vice-minister of mines.

The new board will be appointed at the 7th EITI Global Conference and Members’ Meeting in Lima, Peru, which is scheduled to take place on February 22-24.

Global Voices sat down with Mr. Hart to discuss his appointment and what it means for both Trinidad and Tobago, as an economy that still relies heavily on the extractive sector (oil and natural gas), as well as the wider Caribbean.

Global Voices (GV): What are some of the ideas you want to bring to the EITI now that you sit on its international board? 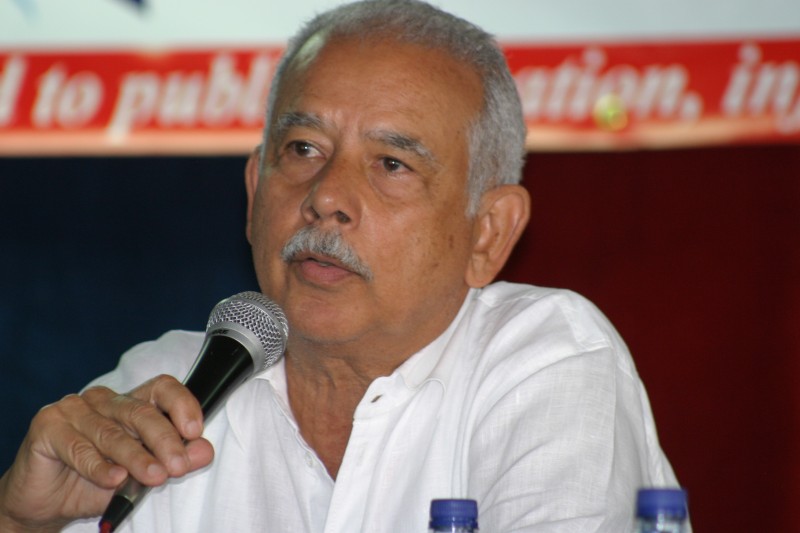 VH: We'd like to introduce things like peer mentorship and a business simulation model to assist new Candidate Country members in implementing the new EITI Standard. This would help them get familiar with the requirements of the implementation process, anticipate problems and find solutions. We are also suggesting that there should be special consideration for small countries with limited institutional capacity.

On the national level, we're sensitizing the nation’s youth to the fact that the EITI is about protecting their legacy. The TTEITI formed a Youth Advisory Committee which targets youngsters from secondary and tertiary level institutions, as well as representatives of Civil Society Youth Organizations interested in issues of transparency, accountability, participatory democracy etc. Liberia is an EITI member country that has similar initiatives, so we are in discussions about arranging educational exchange-visits of youth members between the two countries.

We also want to spread the EITI message to Trinidad and Tobago's resource-rich neighbours, to encourage new membership and build a strong EITI Americas Region. The TTEITI Steering Committee has already encouraged CARICOM countries — including Guyana, Suriname, Jamaica, the Bahamas and the Dominican Republic — to participate in EITI capacity building workshops in Trinidad and Tobago. 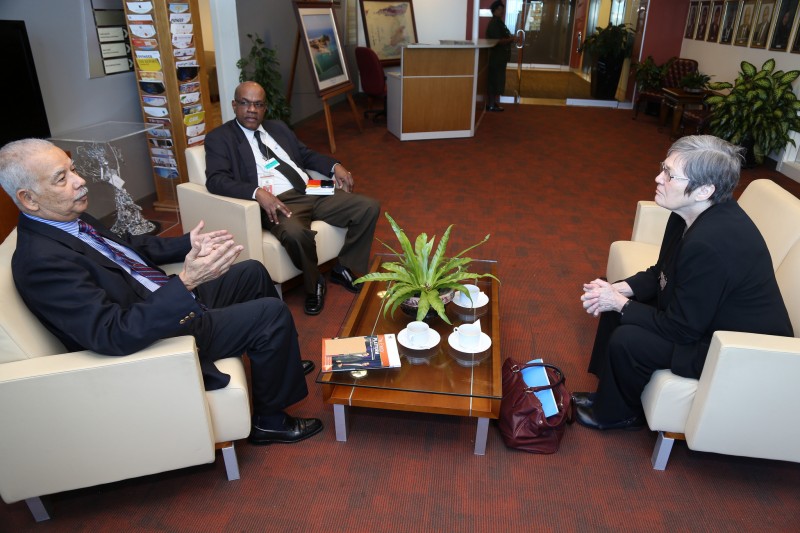 Victor Hart (L) and Clare Short (R) at a meeting at the Ministry of Energy. Photo by The EITI, used under a CC BY 2.0 license.

GV: Before your election to the international board, you've served as chair of the Trinidad and Tobago chapter of EITI since 2010. What has been your mission in that role?

VH: My mission has been to awaken civil society to the fact that the country’s natural resources belong to the people and that they have a right to information on their exploitation — and a duty to use the published EITI data to hold the government and the [energy] companies accountable for their stewardship.

GV: Can you share some of the milestones of your journey thus far?

VH: The multi-stakeholder Steering Committee that I chair was formed on December 8, 2010 and gained EITI Membership in record time on March 1, 2011. In January 2015, Trinidad and Tobago was elevated to EITI Compliant Country status — the highest level of membership — which attests to the fact that we had met the stringent requirements of the EITI Standard and introduced the necessary checks and balances into the country’s revenue governance and management systems.

As a colleague mentioned to me, this really highlights the impact that Trinidad and Tobago has made on the EITI and continues to show the country as an example to the rest of the world. 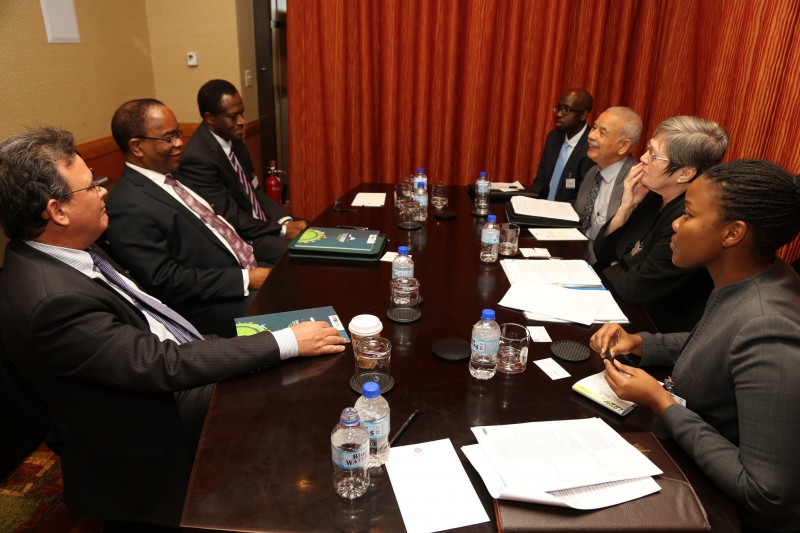 Clare Short and Victor Hart with representatives of the Pt. Lisas Energy Association. Photo by The EITI, used under a CC BY 2.0 license.

GV: Tell us about the experiences that have shaped your life and why you care so deeply about doing this kind of work in your ‘retirement’ years.

VH: The main event that has shaped my life [in this regard] has been my service on the Commission of Enquiry into the corruption allegations of the Piarco Airport Development Project. It opened my eyes to corruption in our country and the harm it could do if left unchecked. During the enquiry, I resolved to spend my retirement years in fighting corruption by promoting transparency and accountability in the public and private sectors. [Prior to his appointment with the EITI, Hart served as chair of the Trinidad and Tobago chapter of Transparency International (TI).]

GV: Has new media been a help to the EITI’s cause? Do you think social media can be better harnessed by other anti-corruption groups?

VH: The biggest challenge I have faced is awakening civil society members from their slumber and getting them involved in the fight to promote transparency and accountability so as to reduce corruption in Trinidad and Tobago. We are using social media to get the message across and partnering with NGOs that have a crucial role to play in the process. However, progress has been slow and the fight goes on because this is a battle that can and has to be won for our children’s sake.

GV: Why should the average Caribbean citizen care about the work of the EITI?

VH: Citizens everywhere must recognize that their countries’ natural resources belong to them — not the government who manages them or the companies that extract and market them. The wealth derived from the exploitation is the people’s patrimony and their children’s inheritance. It is in their self-interest to learn more about the EITI and to lend it their support.

The EITI ensures that the Treasury collects what is due from the extractive companies to fund the government's provision of infrastructure, health, education, pensions, etc. for the benefit of citizens. When people recognize this, they will want to learn more about the EITI and seek to protect it, if and when there are threats by government and/or companies to disband it because too much transparency is getting in the way of corrupt practices.

The data provided in the EITI Reports can empower individual citizens and civil society organistions to demand more of government and companies and to hold them accountable for their stewardship in exploiting the people's natural resources. Lobbying — say, for better infrastructure, schools or more Corporate Social Responsibility (CSR) projects for the people in the areas where energy companies are generating large profits — can be done with greater conviction and confidence based on the credible EITI data. Thus, over time, their lives will be improved. The TTEITI Steering Committee holds forums across the country — citizens should attend to learn more about the EITI.

GV: What does the future of the Caribbean look like when it comes to transparency and good governance?

VH: Transparency and good governance are virtues that the people of the Caribbean, like those in so many other parts of the world, need and must aspire to achieving. However, it is not going to be handed to us on a platter. We have to demand it of our leaders in the public and private sectors and be prepared to fight for it.

GV: What do you want your legacy to be?

VH: That I was passionate in the fight for a corruption-free society and gave it my all.