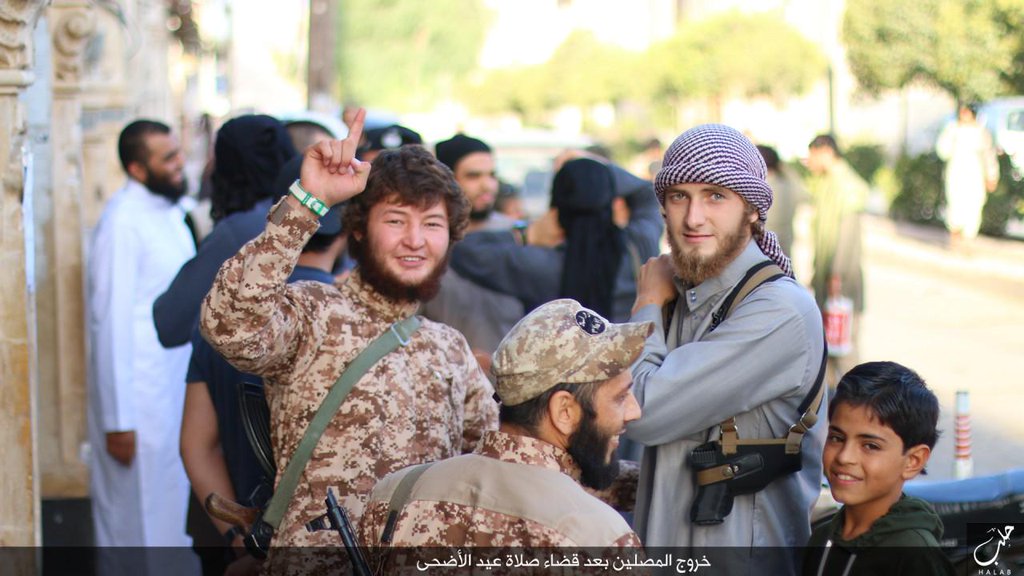 Manbij is one of the largest cities in the Aleppo province. Located in the north of the Aleppo countryside in northern Syria, the territory has been under ISIS (Daesh in Arabic) control since March 2014. Manbij is populated by so many foreign fighters that English and German are now commonly spoken languages in the small town.

Manbij, nicknamed Little London by Jihadis, is half an hour's drive from the Turkish border, and the first stop for foreign fighters travelling to Syria to join the ISIS. According to a recent report in the Telegraph, the town has the largest number of Europeans than any other town in Syria. Britons top the list, followed by Germans and the French.

Needless to say, this invasion of foreign Jihadis is not welcome by locals. In November 2014, Goha's Nail revealed on his blog a real experience on how locals fit into ISIS’ governance scheme:

IS seems reluctant to integrate potentially less committed members too closely. While some IS administrators are Syrians, many are foreigners. For their part, Manbijis are keen on keeping the group at arms length; they appreciate some aspects of IS governance, but do not want to get too close. They expect, however, that the IS focus on education and indoctrination of children is part of a long-term strategy to more closely link the group with the populations it governs.

#ISIS released videos showing children, some of them British, being trained and indoctrinated in the town of Manbij pic.twitter.com/PziZVUtyXJ

The estimated number of foreigners fighting with ISIS in Syria and Iraq was about 12,000 in June 2014. However, according to a December 2015 report by the Soufan Group (an international strategic consultancy firm), the figure has nearly tripled and is now roughly 31,000, consisting of both Arab nationals, like Tunisians and Saudis, and as many as 5,000 recruits from EU nations. France alone is said to have contributed 1,800 fighters, and the UK supplied another 760.

An Assessment of the Flow of Foreign Fighters into Syria & Iraq @TheSoufanGroup Dec 2015 https://t.co/NWSMiydppl pic.twitter.com/dEdVI0ob3Q

People have reached ISIS-controlled territory from at least 86 countries—with a near 300 per cent increase in new recruits from Russia and Central Asia. The Soufan Group says that roughly 150 and 130 people came from the US and Canada, respectively, which amounts to almost no change when compared against past trends, despite ISIS launching a more active recruitment campaign in North America that heavily leverages social media. The Soufan Group says Western nations still face the threat of trained fighters returning home.

The big concern is that an estimated 20 per cent or 30 per cent of these fighters are returning to their Western countries of origin, meaning these countries will all be coping with significant influxes of now-seasoned fighters with international contacts.

In a blog post, British Mujāhidīn in Syria (pietervanostaeyen) writes:

I have no idea whatever caused the rush on British foreign fighters in Syria, but suddenly the hunt for the “bearded European” has been re-opened. It all started with a video by Vice, featuring an interview with two Brits who currently fight in Syria. The interview as such, is highly interesting as these guys explain what made them leave their home towns in the UK for Jihād in war-torn Syria.

After almost two years of ISIS control, Manbijs were not happier under Islamic control and went on protest according to Syria Post Facebook page which posted the video below with a comment:

“See the heroes of Manbij, who despite the top security in the city, took the streets asking the extremist group to leave the city.”

Indeed, citizens living under ISIS control are suffering greatly, thanks in no small part to airstrikes by the US-led international coalition, which are forcing people to flee the area for their lives. Al-Souria Net reported on its Facebook page in Arabic on October 2015 that many people are begging on the streets to make ends meet:

Due to large-scale security measures by the government, access to aid has narrowed, leading to mass begging, especially by women, children, and displaced persons:

[…] in the city of Manbij, poor families are beginning to appear who start begging in order to get something to feed their relatives at home—families who were displaced from Al Raqqa and Deir al-Zour, in particular. […]

And many are saying the promised prosperity of Islamic state is just a lie:

“All we were hearing about the prosperity of the State of al-Baghdadi is an illusion, and any goods are distributed only to their own members—particularly the immigrants.”

According to an activist named Ahmed, speaking on behalf of Abu Jassim (a Manbij local): “As a result of the taxes imposed by the security forces on citizens in the areas Manbij and Bab and Jarables, any official document you need requires a security approval as if we are in State of Assad.”