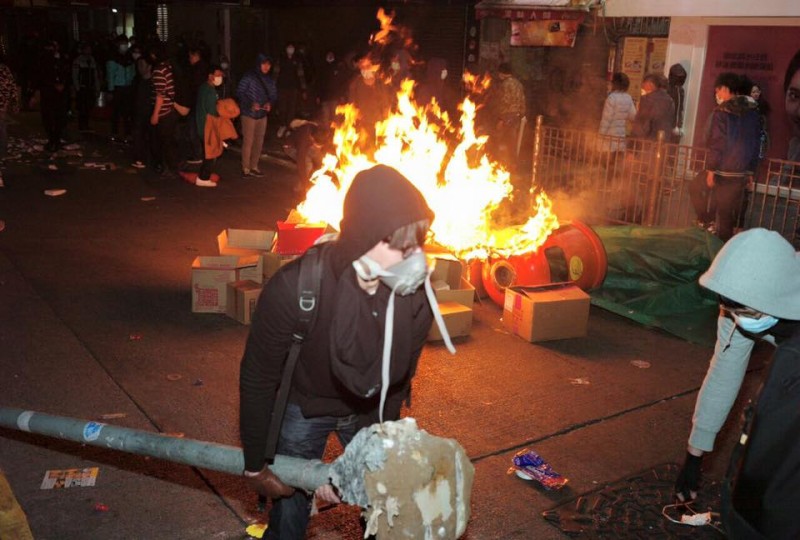 After clashing with the police, protesters turned violent and fought back. Image from inmediahk.net's facebook page.

On the first day of the Year of the Monkey, February 8, a violent clash between police and protesters took place in the Hong Kong neighborhood Mong Kok. The fighting began after police attempted to disperse the crowd who had gathered to prevent authorities from clearing away the unlicensed food vendors at the night market there.

In the recent past, authorities would look the other way on these vendors selling during the Lunar New Year as many shops are closed for the holiday, meaning their unlicensed stalls wouldn't obstruct business. But the Food and Environmental Hygiene Department (FEHD) with the help of police have now decided to crack down during the festival.

Many see the vanishing of street vendors as a result of unjust policies that serve the rich and marginalize the poor. The protests have been dubbed the Fishball Revolution or the Fishball Riot by media outlets, since fishball is one of the most common street foods in Hong Kong.

While the protesters managed to safeguard the street vendors, the police continued to patrol in Mong Kok after officers from the FEHD had left before midnight. Then, minor skirmishes broke out in several spots and tensions escalated when riot police arrived. A full-on melee eventually erupted, with police pepper-spraying protesters and protesters fighting back by throwing bottles and bricks.

At around 2 a.m, a team of police, which had been left without back-up, was surrounded by protesters, who attacked them reportedly in retaliation for being beaten by police during one of the clashes. One officer fired off two warning shots to stop demonstrators from charging forward after one of his colleagues stumbled across some objects littering the street and fell down. The two gun shots triggered inflamed passions even more.

Below is a video clip uploaded by the Epoch Times to YouTube:

‘We need to fight back!’

Why did protesters decide to pick up bricks and fight police? One participant told the Initium, an online investigative reporting site, that his actions were triggered by the shots fired into the air:

At 2 a.m., I learned from the news that a cop shot in the air near where I live. I couldn't stop myself from running to the street […] My face, eyes and arms were burned from pepper spray. I was scared and started to escape. But the police charged forward and hit my back with their batons. I can still feel the pain now. […] I was very angry and shaking […]

He said his anger went deeper than just the warning shots, but stemmed from his frustration over social injustice in Hong Kong:

I never imagined people would attack the cops like this. Those who assault police will be jailed. But I really hate the Hong Kong government. I graduated from Hong Kong University, but my salary was very low and I could not afford to buy an apartment. That's why I ended up living in small compartmental room in Mong Kok. Last year, I decided to take up construction work. It is very hard work and dangerous. But I managed to earn 30,000 Hong Kong dollars a month [about 3,800 US dollars], double my past salary. Yet, I still could not afford the 1 million for the downpayment on an apartment. Now I am 32, there is no hope in my life.

He said he decided to fight back with glass bottles and bricks when he ran into an isolated police team:

[…] I knew I did not need to be scared. It took one or two people to launch the attack and others would join in fighting back. […] I managed to crush a few shields […] We need to fight back! We have to tell the world that we can fight back and we will fight back. We will not act like the fools in the Occupy Central protest, sitting there and waiting for the cops to arrest them.

Occupy Central, also dubbed the Umbrella Protests, was a movement that camped out in downtown Hong Kong for three months in 2014 demanding the right of the people to nominate their candidates for the city's top leader.

‘A desperate response to the heavy-handed policies’

Joshua Wong, the leader of student activist group Scholarism, was witness to the police firing shots into the air. He believed that the tension between police and protesters that has built up since the Umbrella Protests led to the violent outburst:

Last night I saw the police firing shots into the air. After the shots, the violence from the police and the crowds escalated. It was the turning point for people, who began throwing bricks and setting fires. The protesters who chose to attack the police did not have any specific agenda in mind; the anger is not specific to the street vendor policy. It is a desperate response to the heavy-handed policies and stability maintenance tactics of the state apparatus.

For two years, the public distrust towards the government and the police has escalated. Protesters were beaten up by seven cops in a dark corner [during the Occupy Central protests]. The beating up of passerby in street. The “breast attack” charge against a woman protester. The “disappearance” of publishers and bookstore staffs. all these are accumulative and transformed into youth's anger. There is no other choice within the pre-existing political system to resolve these tensions. That's why they're using violent means to defend their values.

Trey Menefee, a scholar based in Hong Kong, also saw the riot happen. He applied political scientist Charles Tilly's “regimes make repertoires” theory to explain why some Hong Kong protesters chose to drop the umbrellas (used during Occupy Central as a non-violent defense against police using tear gas) and pick up bricks:

[…] the Fishball Riot highlighted […] two important contexts. First, over the past year, we witnessed the Hong Kong police force transform into a tool of political repression. The police were not in Mong Kok because of hawkers and fishballs. […] They showed up because ‘localist’ groups, like Hong Kong Indigenous, were there to protest. Had there been anti-localist protesters there that night, we would probably have seen another new habit: police turning a blind eye to their violence, if not outright protecting them. Protests involving Localists groups are becoming ‘forbidden performances.’ […]

Localists advocate the protection of local culture and identity in the face of growing influence from mainland China. Hong Kong is a special administrative region of China, but is supposed to enjoy a high degree of autonomy.

The failure of the Umbrella Movement was nearly total. The regime didn’t even offer token concessions. The aftermath of the Umbrella Movement saw major infighting within the dissident camp with ‘left plastics’ on one side wanting to continue with social movement repertoire on one side, and ‘yungmo’ [meaning militant] Localists on the other arguing that that only a more aggressive repertoire was was worth the effort.

Following Charles Tilly's theory, the rioting is then a response to Hong Kong's transformation from a pseudo-democratic but liberal regime into a repressive one. This could be the reason why local university student groups still stand with the violent protesters and condemn the police's actions.

In addition, the mainland Chinese Ministry of Foreign Affairs’ latest comment on the riot backs up Trey Menefee's observation. The spokesperson concluded that the riot was plotted by a “local radical separatist organization” and praised the police for taking “effective measures”.

Thus far, a total of 36 people have been charged with rioting, a serious crime with a maximum sentence of 10 years in prison. The charge can be based on a person's presence at a riot, even though he or she did not take any aggressive action.