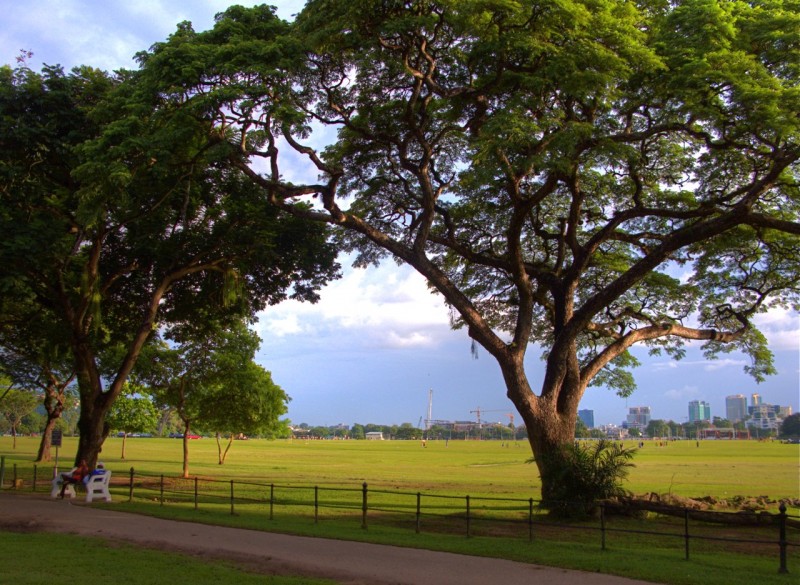 The Queen's Park Savannah in Port of Spain, where the body of the Carnival masquerader was found. Image by Georgia Popplewell, used under a CC BY-NC-ND 2.0 license.

On the heels of the discovery of a female masquerader's body in the Queen's Park Savannah — the Mecca of Trinidad and Tobago Carnival — the mayor of Port of Spain, Raymond Tim Kee, has made a bad situation worse by saying “women have a responsibility to ensure they are not abused during the Carnival season.”

He made the point that even before this year's Carnival season was in full swing, he had warned about the ‘vulgarity’ and ‘lewdness’ of some female masqueraders, adding that “women did not need to behave this way to enjoy themselves”.

By early Thursday, police had not officially confirmed how the woman died, but media reports quoting anonymous police sources identified her as a steel pan player from Japan named Asami Nagakiya.

Social media users of both genders — men were as vociferous in women's defence as women were in their own — were immediately up in arms over Tim Kee's statements, which most people found irresponsible, and a classic case of victim blaming. Gareth Jenkins was astounded:

‘Women have a responsibility to ensure they are not abused’ – yeah, it's not like it's the police or the mayor's responsibility to protect people from being murdered. Or, I dunno, the responsibility of men to maybe STOP ATTACKING WOMEN IN THE FIRST PLACE. Vulgar? You take gold. So ashamed…

Irresponsible and tasteless statement by the Mayor of POS. This type of attitude is one of the biggest reasons why women are under constant attack at all levels.

How recessed the thinking! Disappointed in these comments that hold women and girls accountable for any harm and abuse inflicted on their bodies. It only perpetuates the ignorance that ‘she mustbe look for it’. Strong men are born from boys who are taught respect and value, not just for others but for themselves. Not just for women but humanity. ‪#‎ourlivesmatter

Cherisse Lauren Berkeley posted a graphic with the definition of victim blaming and said:

Why is it always that women are asking for their abuse and up to them not to be abused? Why is he protecting our attackers? Our government officials say things like the aforementioned, some support them and then we all have to face the backlash of spikes in crime, especially toward women.
Men catcall women and sexually harass us in front of police officers and that's accepted and there are no attempts to correct this behaviour, but instead we tell women not to act a certain way, or wear certain things. Hardly ever do I hear persons who hold public office saying, ‘women don't ask for their abuse, and no one is entitled to their body regardless of how they look and or conduct themselves.’
To think that in 2016 where technology is at everyone's fingertips and there is widespread discussion over gender roles, respect, and equality that someone in authority has had the bravery to utter such nonsense.

To the victim, she added:

More than anything, I'm sorry and ashamed of the words of the Mayor of Port Of Spain to you, and all other victims who have been triggered by his stupidity and ignorance in to even entertaining any thought that their abuse was their own fault. No one deserves to die or be found the way you did and then to be further disrespected in death to have any blame cast in your direction.
Sincerely,
Every Trinbagonian that knows better.

Mr. Tim Kee, please be advised that our imagination and indeed yours will never reveal what happened. You cannot as an official, cast aspersions on a person's character nor can you blame the victim. You owe this young lady an apology for your crass and insensitive response to this unfortunate situation.

Andreas Stueven, on a comments thread about the topic posted “Ten Rape Prevention Tips” in which the onus was all on men to not interfere with women, adding:

This is the same ‘Is she own fault she get rape, why she dress so?’ Attitude… I don't agree at all, not this time or any time. While i disagree what carnival has come to, that still does not give anyone any additional rights aside from the fact that the cause of death is still unclear as far as i know. He actually implies that this was a rape gone bad and delivers a ‘mitigating reason’ for the Rapist one time.

Soo! Mayor Tim Kee! How many stupid salads did you eat before commenting about the pannist who was found dead? Insensitive idiocy!

“It is a matter that she was jumping up in a costume”. Mayor Tim Kee, are you serious?!?!

While some female netizens were demanding an apology by the mayor for his careless statements, others were calling for Tim Kee's immediate dismissal.

Mayor Tim Kee, take back that statement. Then get out and stay out.

A protest outside City Hall is being organised for tomorrow; in the interim, an online petition is being widely circulated on social media to agitate for the mayor to step down.

Update: At around noon on Thursday, Mayor Tim Kee said that he “unequivocally apologizes to women and the national population who were offended by remarks attributed to him following the death of carnival visitor and mas player, Asami Nagakiya”, but maintained his position in advising women to “take responsibility and protect themselves as so many women are the victims of abuse at the hands of others.”