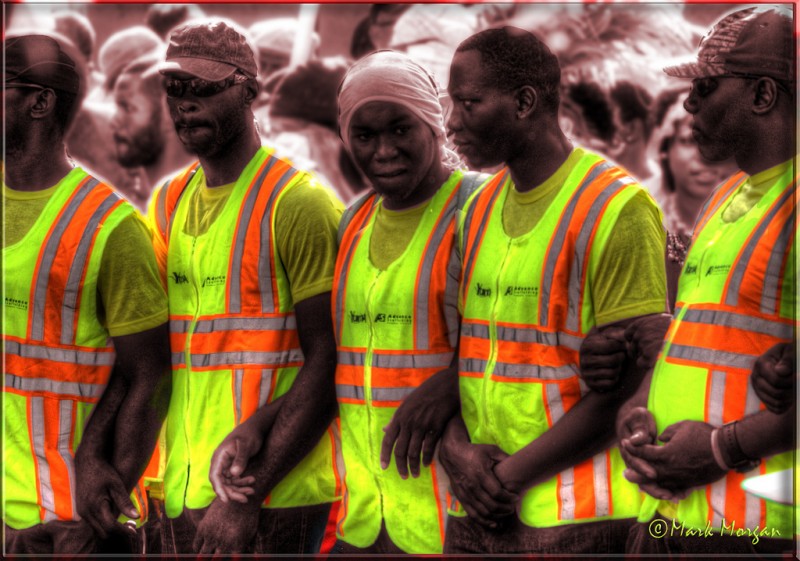 Security for one of the Carnival Bands, 2012 — Photo by Mark Morgan, used under a CC BY 2.0 license.

Trinidad and Tobago's 2016 Carnival is officially over, but despite the best hopes of the country's police force, the celebrations were not without incident.

The first negative experience to get the attention of social media was the behaviour of the security detail in one of the popular masquerade bands, YUMA. The fracas began when a man, who turned out to be a government councillor by the name of Jason Alexander, was ‘jumping up’ (dancing) in the band despite his playing mas (paying to masquerade) with another group.

For many years now, bands that parade on the streets on Carnival Monday and Tuesday offer an ‘all-inclusive’ experience, where patrons pay one hefty price for everything from their costumes to food, alcohol, music and personal facilities, such as toilets and air-conditioned rest areas. When the band is on the move, masqueraders are kept track of through a wristband identification system and cordoned off from spectators via ropes that are manned by security guards. The system is meant to control the influx of outsiders who would often converge on popular bands, take up space and ruin the experience that masqueraders had paid for, but some say the practice is getting out of hand.

The YUMA incident was a case in point. A video of Alexander's assault, carried out by the band's security officers on Carnival Monday, was soon making the rounds on Facebook. According to reports, Alexander either did not exit the band fast enough for security's liking, or intervened when security started harassing a female masquerader — either way, he became the focus of their violence.

In a public Facebook post, Naki Tuitt, one of the female masqueraders who witnessed the exchange, shared the video, saying:

This is the last end of licks the poor guy got today in YumaBand. Harmless. Because he wore an islandpeople band and was told to leave. He didnt leave fast enough. I asked them not to push him. Then they told me i could leave too. I told dem i paid so i dnt have to. Next thong [sic] u know i was slappped [sic] to the ground.

My girlfriend J railed up and she was immediately punched to the ground by a male punk calling himself ‘Yuma Extraction’.

When the male saw we were hit by a male security he immediatey [sic] intervened. He was greeted with a barrage of kicks cuffs batons to his face and head…to the groundddd near the moving truck. He was brutally assaulted by 10-15 Yuma toy cops. This end part is wherei got up n tried to cover him frm being possibly killed by dunceeeeeeeeeee fools who were power trippin. I want allllllllll my money back and charges laid for assault.

During Carnival 2015, a man was actually stabbed to death, allegedly during an altercation with band security. Facebook user Rhoda Bharath shared the news link to that story and commented:

So the behaviour from band security isn't new. A pattern developing.

YUMA quickly tried to ease the online uproar over the incident, issuing a statement that the members of the security team who were involved have been fired. In a post on the band's Facebook page, YUMA's administration also said:

We at YUMA have been made aware of the incident . We are in talks with our patrons as well as another affected person and have promised to give this our full attention as we've never had a reported incident like this in our history.
That aspect of our security and its extraction protocols are being reviewed. The members involved have been replaced.

‘They have been acting illegally’

Facebook users were soon weighing in on the whole exchange in public posts. Dawn Cameron thought that poor training of security personnel contributed to the problem:

There is controlled security and down right stupidity. […] If these special security personnel are from bona-fide security establishments well that tells you the companies we have and how they train them, if not and are contracted people from off the street these mas bands need to ensure proper training is had. Poor behaviour. Clearly a lesson.was not learnt from the death of a non masquerader at the hands of band security last year.

The blogger at Trini World Views, who has significant experience in the security field, contributed to the discussion about officer training:

There are approximately 400 security service providers in Trinidad and Tobago. […] Only 60-70 have a licence from the Ministry of National Security to operate as a legitimate Security Service Provider. The process is tedious and is only necessary for those who intend to operate as estate police […] the rest just operate as a regular Limited Liability Company. While there are companies both large and small who take training seriously, investing in their own internal training departments and centres, the majority take it lightly at best.

If this was a tourist a WHITE tourist would they have reacted like a pack of hyenas?

A couple of Facebook users wondered whether the security officers were provoked:

I could surmise that the guy possibly looked for what he got. we don't know all the facts. the clip shows that he fired at least one punch. what could have taken place before that punch? […] notice too, one of the very Yuma security was trying to stop the others. what we see is not always the entire picture.

So much men taking advantage of one man, carnival is such a waste of money.

Alexander has not yet decided whether he will pursue legal avenues, but one attorney and opposition senator, Wayne Sturge, has said that Carnival bands have no legal right to restrain people from jumping up with whatever band they choose:

You can’t even exclude a non-band member from the band. What you can do is make sure that they don’t get something to eat or drink. If the man is chipping down the road, outside the judging point, you can’t exclude him. It is a public road, it belongs to all citizens. Until they pass a law saying that they (bands) have exclusive rights to the cordoned off parts of the road then they don’t have such rights. They have been acting illegally.

The body of a female masquerader is discovered

In an even more disturbing development, the body of a female masquerader was discovered on Ash Wednesday morning, under a tree in the Queen's Park Savannah — the location for the majority of Carnival events. Police were using social media to ask for the public's assistance in identifying the woman. It was later reported that she was a steel pan player from Japan, Asami Nagakiya, who was accustomed to coming to Trinidad each Carnival, when she would play with the Silver Stars Steel Orchestra.

However, Trinidadian pan player Mia Gormandy who is now the World Music instructor at Florida State University, published this plea on her Facebook page:

Please please please STOP spreading rumors about Asami Nagakiya. I am in direct contact with the police and other Japanese pannists and it is NOT at this moment confirmed that it is her. While there are lots of suspicions and rumors, at this very moment while I am typing this message, it has not been confirmed that the body found is indeed Asami's.

This has not stopped both mainstream media outlets and social media pages from reporting that it is. An autopsy cannot be carried out until there is a positive identification on the body; reports are that the autopsy is scheduled to take place this morning. If it does, that in itself will confirm that the body has been identified as Nagakiya's.

The two ill-fated incidents have brought this year's Carnival to a bitter end.

Update: Just after 1:00 p.m. on Thursday, autopsy results revealed that body was indeed that of Japanese pan player Asami Nagakiya, and that the cause of her death was strangulation. The police are now treating the case as a homicide.