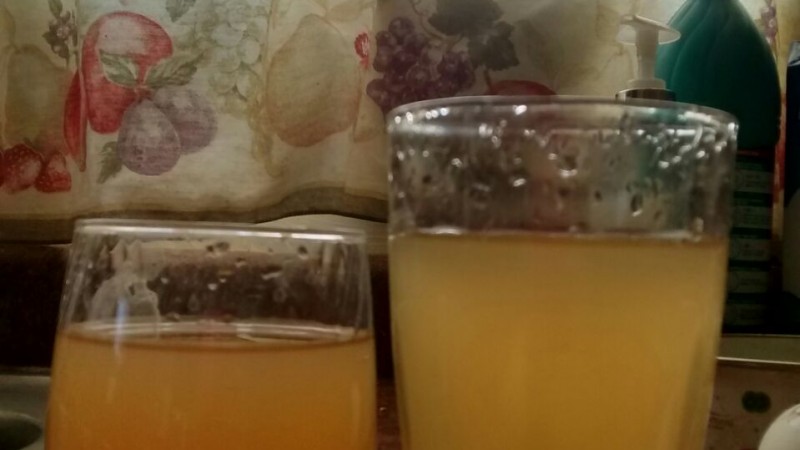 Following the spillage of 40 million litres of copper sulphate into rivers Bacanuchi and Sonora, their waters ceased to be colourless, odourless and harmless. Picture: Mas de 131.

What is now considered the worst environmental disaster in the history of Mexico occurred a year ago when the mining corporation Grupo México contaminated the Bacanuchi and Sonora rivers in the northern state of Sonora. Since then, the affected populations have officially requested the protection of their rivers seven times so that they be returned to their clean state.

Francisca García is from Aconchi (which means “strong wall in the water”), a village filled with red chili pepper crops that have been affected by the mine's arsenic spill. According to the state's tourism commission, Aconchi, which was founded in 1636, is one of the “picturesque villages settled on the Sonora riverbank, which form a colourful route where men, culture and the magic of each corner of the course of river Sonora all interweave.”

Francisca does not need such marketing. She knows what it means to live on the Sonora. She longs for the days when as a pre-schooler she would run to bathe in the river. Today, it saddens her not to be able to drink from these waters as well as that the contamination is killing off the harvest of red chili peppers, pumpkins, corn, peanuts, and and injuring livestock.

The spill occurred in the Buenavista del Cobre mine facilities, a subsidiary of the Grupo México, which belongs to the second richest man in the country, Germán Larrea. Arsenic, lead and other metals were released into the river.

The residents of Aconchi recall that it was on 4 August 2014 that they noticed the Sonora river's current had an unusual colour and smell, yet at first they did not read too much into it. Moreover, they calculated that if that water was flowing by on the 4th, it meant that it had already been running for 24 hours, since when it rains in the highest part of Cananea, that is how long it takes for the water to arrive at Aconchi.

On 6 August, the colour of the water became an intense yellow. The alarmed residents began to alert others via telephone or social media, while some turned to their municipal or civil protection authorities, but no one informed them of what was going on, why the water was arriving like that and whether or not it was dangerous to drink it.

Neither the company nor the authorities involved would let them know what was happening. During the hours that followed, the wells from which people obtained drinking water were shut down. In that moment began a panicked wave of bottled water purchases, as Zoila López, a mother from the municipality of Baviácora, recounted.

Zoila began to feel pain in her body; at government certified clinics she was diagnosed with the flu, but her symptoms intensified to the point where she lost all mobility. She sought help at the Federal Commission for Protection of Sanitary Risk's clinic (Cofepris) and the doctor who saw her sent her to a psychiatrist.

According to the diagnosis, Zoila suffered from depression. Penniless, as her family lived off agriculture, livestock and the harvest, which they lost after the spill, Zoila borrowed money to see a private doctor. In fact, her symptoms were caused by the arsenic in her body, which damages the nervous system. Her husband and her three small children presented the same symptoms.

Without any clear information and angry that the authorities and company were not being held accountable while the river and crops remained contaminated, Zoila, Francisca and hundreds of other people united to defend their rights, forming the Committees for the Sonora River Watershed from seven coastal municipalities in Sonora.

The committees approached a civic organisation, The Project on Organising, Development, Education and Research (PODER), for an appraisal of the case. In the investigation conducted by PODER, researchers found 55 irregularities incurred by Buenavista del Cobre, a subsidiary to the Grupo México.

The first irregularity was the cause of the spillage: the mining company assures that it was due to the excess of rain, even though two facts point to the contrary. Firstly, the Bacanuchi climate station registered a minimum of rainfall (0.5mm) that day. Secondly, in the version of events that PODER reviewed via the System of Access to Information (Mexico's access to public information law), Buenavista del Cobre states that “the hydraulic system was being repaired and the dam did not have any kind of valve”.

The same investigation maintains that part of the mine where the spillage took place was 50% constructed; moreover, it did not have a detection system nor a control for leaks. This means that the company was operating without the minimum requirements demanded by the country's environmental law.

As a way of resolving the consequences of the leak, the governing authorities created the Sonora Trust  with the goal of serving as a source and means of payment to carry out measures of remediation, reparation and/or compensation for the damage caused by the leak to both the environment and citizens’ health, in accordance with the Remediation Programme, and as a payment mechanism for complaints of material damage caused by the spillage, as stated on their website.

Nonetheless, until July 2015 the Remediation Programme had only been approved for zone 1, where the mine is located; in the four remaining zones, where the affected populations are located, it had not. This means that “10 months after the event took place, both Semarnat and Buenavista de Cobre have not been held responsible”, states PODER. The Committees for the Sonora River Watershed filed an official request on the matter.

However, the communities’ complaints about the company’s behaviour didn’t begin with the spill. Since the mine began operations, they have seen their rights violated, particularly in their access to information and right to be consulted. Francisca says that they have never been asked about this project.

As such, part of the strategy of the Committees for the Sonora River Watershed is to file official requests and complaints. They have finalised seven so far, one being for the lack of adequate consultation; by law the populations residing in the villages have the right to be consulted by Mexico's environmental agency before any environmental authorisations are granted.

Another request concerns the quality of the water in the wells, since official Mexican regulations establish lower standards than the international norm. Consequently, the water available to populations that depend on these wells can contain high levels of metals, contravening the human right to brackish, quality water. Zoila is certain that drinking water from a contaminated well, which was first given approval by the National Water Commission and consequently shut down, was the cause of her own and her family's illness.

On 7 October 2015, the committees obtained an important victory: Sonora's first district judge ordered that the National Water Commission carry out new studies due to the risk that populations might drink contaminated water. The committees offered to create an oversight group to ensure that the authorities comply with the judicial order in the best possible way.

And in February 2016, two water treatment plants began operations to filter their drinking water of the heavy metals — 18 months after the spill.

The remaining requests go hand in hand with their demands: they want the Sonora river to return to a clean state, they want to be confident that the water is safe to drink and they want their crops, on which they used to work every day, to continue to grow and feed them.