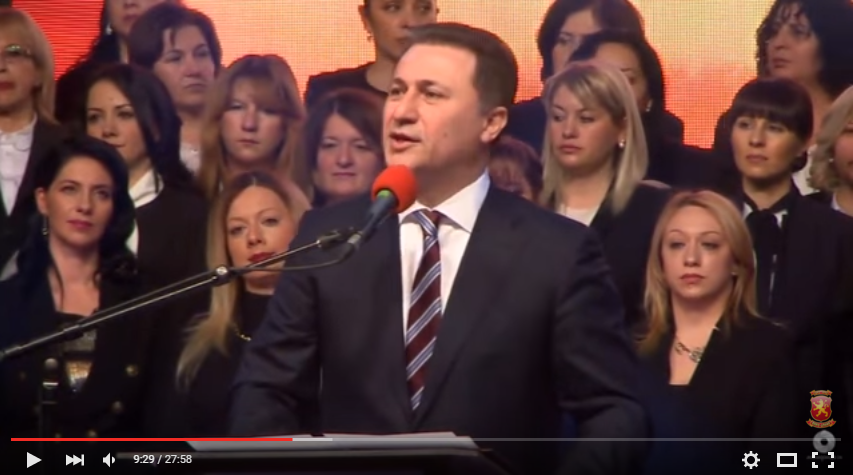 “On the 24th of April the people's punishment and revenge will come”, Gruevski threatened angrily while speaking in front of the Women's Union of VMRO-DPMNE on January 24. Screengrab from YouTube Channel vmrodpmne macedonia

Only several days after his resignation, the now former Macedonian Prime Minister Nikola Gruevski threatened in a speech that after early elections scheduled for April this year, “the people” will kick out everyone who he sees as enemies.

Critically thinking individuals in the country, including civil society representatives and journalists, took this as an open threat that if Gruevski's ruling, right-wing political party VMRO-DPMNE wins the elections, the current autocratic regime will become even worse and they will be in danger:

“Well now, on the 24th of April the people's punishment and revenge will come. Their moment of glory will come. That will be the day when the people of Macedonia, will show to everyone who is who in this state, i.e. who owns this state. In April, the people of Macedonia will bring back the partially misappropriated government, and will boot out and humiliate the artificially and forcefully appointed officials through massive voting at elections…” Gruevski threatened with anger in his voice while speaking in front of the Women's Union of VMRO-DPMNE on January 24.

The online community reacted with rage and disbelief, mostly by tweeting to Commissioner for European Neighborhood Policy and Enlargement Negotiations Johannes Hahn and other European Union officials, who serve as guarantors of an agreement reached in July 2015 stipulating reforms in Macedonia, including Gruevski's resignation, following months of political crisis.

@JHahnEU more from Gruevski's delightful speech today, enjoy while we fear for our lives https://t.co/w4hCFHwOCg

The political crisis that led to the EU- and US-mediated deal was escalated by revelations that the country's intelligence services on Gruevski's order had illegally wiretapped government employees, politicians, journalists, activists and foreign diplomatic representatives. Dissenting Secret Service members leaked the recordings to Zoran Zaev, the leader of the opposition Social-Democrat Party, who brought carefully selected parts of them to the public's attention in early 2015. As Zaev himself claimed in his last interview, they chose to publish the recordings that indicate misuse of power and illegal activities.

“The whole set of obtained illegal surveillance recordings totaled up to more then one million phone conversations”, Zaev said, “and they were all submitted in the newly formed Special Public Prosecutor's office”.

The leaked audio seems to confirm long-held suspicions of corruption, electoral fraud, blackmail, extortion and political interference in the judiciary, among other misdeeds, in Gruevski's government.

Such backsliding on democracy, freedom of expression and rule of law could jeopardize Macedonia's candidacy for the EU.

Gruevski, who was in power for a decade, used his public speech (see a video here) to make threats against the country's Special Prosecutor who is in charge of investigating alleged crimes involving Gruevski himself, as well as against the representatives of the international community for helping the opposition:

All criminals with political ambitions who might think that through bribes, fraud, false recordings, pawning the country and its people, they can raise tensions in the country, undertake activities that damage the chances of foreign investment and the creation of new jobs, which are so very desired, or try to gain something for themselves will get booted by the vast majority of the people in this country, through massive voting at the elections.

He then added that after these elections nobody will think again about “gaining political power through fraud, collaboration with foreign intelligence, criminals, Vanhoutes [referring to Peter Vanhoutte, the international mediator in the Macedonian political crisis], Katicas [referring to Katica Janeva, the Special Public Prosecutor investigating the surveillance bombshells] and scammers who try to blackmail businessmen.”

The Special Public Prosecutor's office reacted with a statement saying that they are “seriously distressed” and will increase the security measures following Gruevski's speech:

“Regarding the public speech from the president of VMRO-DPMNE, we want to express that as public prosecutors, we are seriously distressed and troubled, and have decided that the Special Public Prosecutor’s office will increase its security. In regard to this, we would like to clarify that we have requested from the Interior Ministry to assign people to work with our office and oversee the personal security of the prosecutors”, the SPP said.

An unnamed senior official from the European Union also reacted, telling independent news website Meta that Brussels was disappointed after Gruevski's speech and “his lack of respect for his political opponents”. Belgian facilitator Van Haute, on the other hand, described Gruevski's rhetoric with one sentence: “If you do not like the message kill the messenger”.

‘He is clumsily hiding his intentions’ 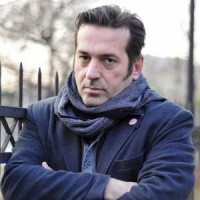 Civil society activists were appalled by the former prime minister's speech. Among them, Xhabir Deralla from the NGO Civil wrote an article headlined “Gruevski – aggressive, enraged and full of hate“. Deralla argued there is no doubt that Gruevski “is prepared to do anything to escape justice, as well as to remain in power. At any price”.

There are no hidden messages in Gruevski’s speech. He presented all of his views in the manner of a fierce populist, who will not hesitate in his quest for power, who will not be stopped by any agreement mediated by international representatives, nor from laws or principles of a democratic and fair political competition. 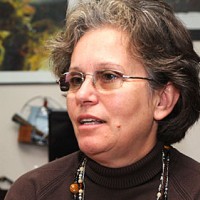 International law expert and activist Mirjana Najcevska wrote a blog post about the speech headlined “About the Speech, Women and the Black Devil”.

For starters, I am sure that there is some good explanation for why this speech, held in front of the Union of Women of VMRO-DPMNE, fails to mention any women-related issues. It does not mention gender discrimination, differences in wages between men and women, the absence of women from decision making positions in the state, women's poverty, abortion, domestic violence, and of course, those 280,000 women who all fall into the so uniquely Macedonian statistical category of “homemakers”.

One of Gruevski's controversial initiatives was to change how unemployment is calculated, resulting in a lower rate because, for example, unemployed women were then categorized as homemakers.

Najchevska noted that Gruevski used a proverb that implies terrible retribution: he said that the Devil himself will “claim his share” after the elections. “And the women, they were listening, admiring and applauding,” she concluded.

Would the real VMRO please stand up?

Alongside the more serious responses, there was no lack of mocking towards the former prime minister, including one video where “sliced, diced and glued” parts of Gruevski's speech were put to the music of American rapper Eminem's hit song “The Real Slim Shady”. The parody was published with the satirical title “The Real VMRO”.

I know they would prefer if I disappear. / I know that / they hate us and despise us. / Like it or not, you'll see more of me. / Blackmail, setups / VMRO is here / to boot out and humiliate. / You'll hear from me / who is who in this state. So many years in preparation for a dictatorship / a deceiver and criminal to run the state. / He decides in this country / with filthy games and manipulations. / Look / I'm the master of this territory. / Now the Devil comes to claim his share …

Past reactions from the international community to troubling developments in Macedonia's return to democracy mainly used veiled diplomatic language, demanding responsibility from all parties without naming names.

This time, the US Mission to Organization for Security and Co-operation in Europe issued a very explicit note: “Statements from one political party, VMRO-DPMNE, and its leaders attacking the work of the Special Prosecutor are another source of concern”. Not one to appear subdued, Gruevski responded with a kind of “conditional” retraction of his threat, claiming that his party also supports the Special Prosecutor, but “she should be careful not to allow influence from certain political parties and instead, work under the law.”