Iranians on social media have been following the firestorm that ensued after newscaster Sheen Shirani, who works for the Iranian state's English-language network Press TV, came out with damaging evidence that her executives were subjecting her to sexual harassment.

On 5 February, Shirani posted a series of recordings from telephone conversations as well as messages from Facebook messenger and WhatsApp highlighting unsolicited advances by Hamid Reza Emadi, the broadcaster's news editor.

Emadi was added to a European Union blacklist for human rights violations by the European Court of Justice in 2013. Emadi was identified by Maziar Bahari, an Iranian reporter now living in exile, that Emadi took part in his interrogations and forced false confessions while locked away at Iran's Evin prison. Press TV aired a series of confessions by tortured detainees prior to Emadi landing on the EU sanctions list.

Shirani published the messages on Facebook. That same evening, she reported that Facebook had removed her post for not following Facebook's Community Standards. Emadi had sent her multiple requests to remove her recordings beforehand, but it is unclear whether there is a correlation between Emadi's objections and Facebook's removal. 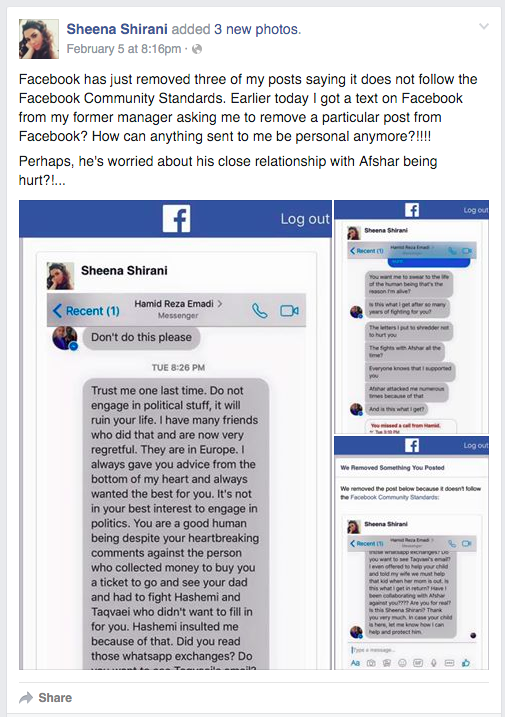 In an video interview (featured at the top of this post) with Masih Alinejad, an Iranian activist journalist living in exile, Shirani further explained Emadi's physical harassment in the office.

She also accused Press TV studio manager Payam Afshar of sexual harassment. After rejecting his advances, Afshar reportedly subjected Shirani to unjustified targeting, asking other employees to report on Shirani's petty infractions, such as arriving a second or two late for her broadcasts.

Shirani said she turned to Emadi for advice on how to deal with Afshar. After the problem with Afshar was solved with Emadi's help, Emadi reportedly reasoned his sexual advances under the rubric of his professional support for her:

In the recording Shirani shared with journalist Alinejad, Emadi is heard requesting that Shirani go to bed with him because he feels restless. After she tells him to make these requests of his wife, Emadi reasons, “If I could find my wife I would not ask you.”

This case highlights the precariousness of women's roles in Iran's professional settings.

In reaction to harsh criticism on social media accusing Shirani that she had in reality engaged in sexual relations with Emadi, she told Alinejad:

If I wanted to engage in a relationship with Mr. Emadi rest assured I would have reached higher echelons of Press TV rather than working there as a simple woman without a contract; a woman without insurance; a woman running the risk of being made redundant..I would have accumulated a lot of wealth and I simply would not be worrying about my future either, nor that of my son.

According to a report by IranWire, Shirani has left Iran, and her whereabouts unknown. While employed with Press TV, she always wore a hijab, in line with the broadcaster (and country's) strict rules on women's modesty; however, following her departure and accusations, she has presented herself without the headscarf. It's “time to break free,” she wrote on Facebook. 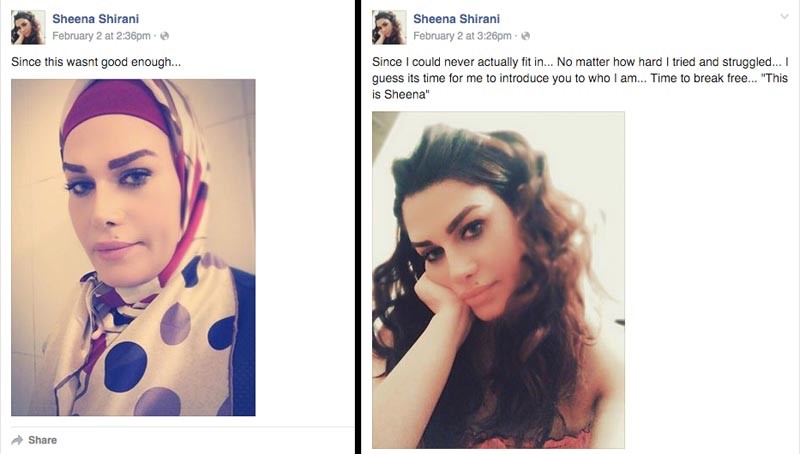 Shirani posts about shedding her hijab and leaving a job that compromised her dignity while forcing her to maintain a Islamic dress code.

Press TV released a statement in Persian addressing Shirani's revelations. They explained they had suspended two employees while the investigation into the case continues, but did not indicate whether the two employees were Emadi and Afshar. They also claimed that no formal complaints were made inside of Iran, and the public allegations were part of a political conspiracy meant to undermine Iran's political system.