Iranian Couples Are Increasingly Living Together Outside of Marriage 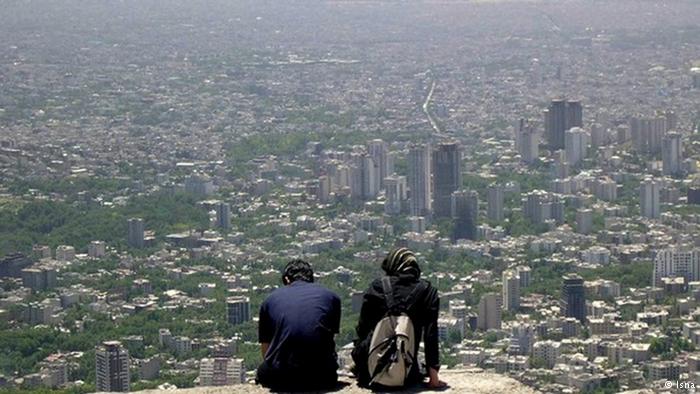 A young couple sit atop a hill overlooking Tehran. Image from ICHRI.

That’s because the phenomenon is directly related to socioeconomic disparities between Iranian men and women, a sociologist speaking on the condition of anonymity told the International Campaign for Human Rights in Iran.

For example, more women are choosing to live with their male partners outside of wedlock because men and women do not have equal status under Iranian law.

“Most of the conditions contained in marriage contracts are in favor of men,” said the sociologist, who specializes in women’s studies. “Men have more rights regarding divorce, or determining the place of residence, and controlling their wife’s travels, education and employment.”

Iranian men and women are also not exposed to many opportunities to interact with each other during their development due to gender segregation—imposed at the state and familial levels—so “white marriages” are seen as a way for couples to be together without bureaucratic entanglements.

“This type of lifestyle allows women and men to enjoy living under one roof together without any complications,” especially when official statistics show many marriages end up in divorce, explained the expert.

But the sociologist warned that the government’s growing opposition to so-called white marriages could endanger women in Iran, who already have less rights than men under the Islamic Republic’s constitution.

“If a woman is attacked by her male partner, she would have no legal protection,” the sociologist told the Campaign. “Instead she would be asked by the police and judicial authorities about her marital status, and if she is not legally married, she will be in a lot of trouble.”

Since co-habitation outside of wedlock is often kept secret from traditional Iranian parents, women could also become less willing to seek familial support even if they were being subjected to mental and physical abuse by their partners.

Under Iranian Sharia law, men and women are required to register their marital union. Those who choose not to do so are considered by the state as living in sin and committing adultery, an offense punishable by death.

But more and more young Iranians are choosing to take the risk.

Perceiving the growing trend as a threat to revolutionary ideals, state officials are condemning the lifestyle choice through words and actions.“The decline of marriage statistics is a serious threat, and unfortunately, many young people have turned to ‘white marriages,’ which is a new malady and a serious blow to the family,” says Seyed Reza Salehi Amir, an adviser to Iranian President Rouhani.

He added that compared to last year, marriages have declined by 6.5% and divorces have increased by 4.5%.

“The Islamic Republic of Iran is one of the few societies in which the pace of change is very fast and the fast-paced changes are worrisome,” he said.

The Young Journalists Club, affiliated with the state broadcasting organization, has attributed the rise of unmarried couples to the infiltration of “Western freedoms and modernity” in Iranian society.

The Judiciary’s cultural affairs deputy has also urged the media to “stop referring to this inauspicious phenomenon as a ‘white marriage’ and instead call it ‘black coupling.’”

During the summer of 2015, the government announced the implementation of the “Stable Family Promotion” project in Tehran Province, aimed at combating “white marriages” that were described as an “imported concept incompatible with the harmony and happiness of the Iranian family.”

Some Iranian academics are meanwhile publicly insulting and shaming women who choose to cohabitate with their partners.

Women entering “white marriages” only last as long as they are young and beautiful, sociologist Amanollah Gharaee Moghaddam told the conservative Entekhab newspaper.

“After that they will turn into prostitutes,” he said.

Translated byCenter for Human Rights in Iran
Share this: twitterfacebookreddit