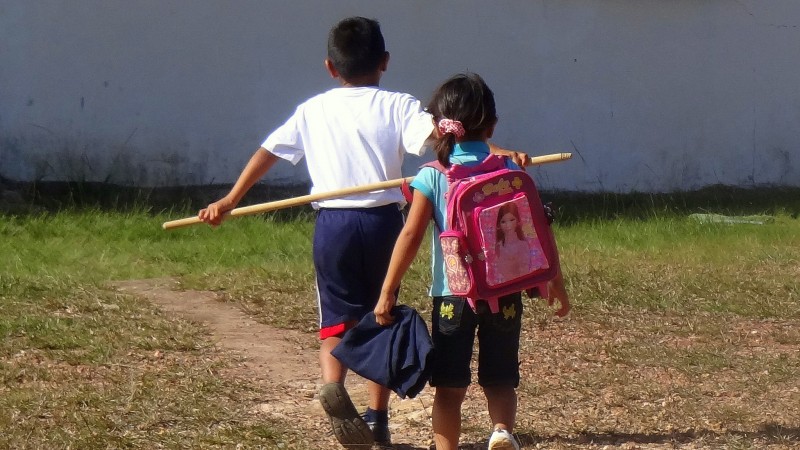 This post was originally published in Morelia Morillo's blog, The Chronicles of the Border.

Although they love their profession, upwards of 300 teachers in Gran Sabana, Venezuela, have left their classrooms to find more affordable pay in other industries. Instructors—mainly those from an indigenous background—are walking away from grade schools and junior high schools to take jobs in gold and diamond mines, while others (namely the Creoles, or non-indigenous peoples) find other work as taxi drivers or vendors selling Tupperware, hot dogs, empanadas, or gasoline.

Far from the coast, on the border with Brazil, even the most qualified teachers earn an average 20,000 bolivares ($20 in the black market, the only one available) a month, while the average cost of renting a room runs just as high. People who want to eat can expect to spend, at a minimum, another 500 bolivares ($.50) on a kilo of cornmeal. In urban areas, where there's no public transport, a single ride usually costs about 300 bolivares ($.30).

Venezuela uses four different exchange rates simultaneously. The result is that things can either be extremely cheap, or unbearably expensive, depending on the rate used. According to the Mises Institute, Venezuelans must rely on the black market to meet their demands for foreign currency. Therefore, people naturally rely on the black market rate, though it is much less advantageous (getting as high as 900 bolivars per dollar, versus 6.3-200 bolivars per dollar on the “official” market).

For years, studies from the Venezuelan Corporation of Guayana and one of its subsidiary companies, Electrificación del Caroní (Edelca), have established convincingly that this area is excellently suited to tourism and generating water for hydroelectric production. Nevertheless, mining in the area has become increasingly uncontrolled.

It’s November 2015. Mining is rampant in rural areas—even within the Canaima National Park. In the capital city of Santa Elena de Uairén, there’s a market for everything imaginable and domestic fuel sales abound.

It is estimated that half of the gas coming out of the local service stations, where long lines form daily, goes to the mines. The other half of the fuel is sold to clients in Brazil. A 200 liter-drum can cost up to 300,000 bolivares ($300). In Venezuela, a liter of gasoline doesn’t even cost one bolivar ($0.10). In Brazil, it costs nearly four Brazilian reals ($1).

An official from school district number four, in the Gran Sabana municipality, confirmed that during the 2014-2015 academic year, at least 80 teachers resigned. She warned, moreover, that the real figure could be even higher, given that some teachers withdrew from their classes without formally terminating their employment at the Ministry of Popular Power for Education.

In addition, the same source said that, so far, during the first three months of the 2015-2016 school year, at least 25 teachers have resigned.

Another official in the same office reported anonymously that 300 teachers throughout the city resigned at the end of the 2014-2015 school year, exploding the students-to-teachers ratio in both indigenous communities and urban areas.

At the end of the 2014-2015 school year, school principals, district officials, and officials from the mayor’s office met to discuss the situation and drafted a letter to the Ministry of Education, then led by Héctor Rodríguez, to expose what was happening and request 109 new teachers. In response, in November, 83 new teachers were brought in, but the rest of the problems that have led to this crisis remain unresolved.

In some cases, vacancies remain. Valdirene Dos Santos told the Mujeres del Agua Foundation’s blog that school children of different grades were gathered into a single class in the El Paují community.

In the Bolivarian Comprehensive School known as “El Salto,” half of the teachers left. Some retired, others left because of disabilities, and others resigned. In light of this event, some parents had to take the lead in the classroom. For two months, Kámala Manjari served as second-grade teacher, for example.

At the beginning of the school year for first-graders at the Gran Sabana preschool, which is attached to El Salto, was delayed for at least a month when one teacher requested her retirement and another requested leave due to a disability. Finally, the Common Council of Brisas del Uairén and the city of Gran Sabana hired a teacher, who earns 24,000 bolivares ($24) a month.

The school in the indigenous community of Las Agallas closed until further notice and the school in Ikabarú, the capital of the second parish of the city, began classes at least a month late, once the Bolivar School Zone managed to hire five new teachers—all from other cities, apparently with the stipulation that they not request any changes over the next eight years.

In Ikabarú, an area dominated by the ministry industry, located about 114 kilometers (70 miles) of dirt road from Santa Elena, a chicken costs up to two grams of gold—at least 30,000 bolivares ($30). To get paid, a teacher must travel to the capital city, paying for a ride in a rusty vehicle (3,000 bolivars, or $3, each way). All payments are made to the teachers through Bank of Venezuela checking accounts, which only has branches and ATMs in the capital city. Teachers receive a debit card, but local ATMs only process daily withdrawals of up to 3,000 bolivares ($3).

The teachers who remain, those who didn’t resign, do it because they like to or because they are about to retire, but they also sell products, clothing, gasoline, drive cabs,” the official told us confidentially.

Nardy Torres and David Silva are married, the parents of two girls, and teachers. They both love their profession; they feel that it’s the only way they serve their families and their community. Both Nardy and David have resigned from their positions, however, stating “economic reasons.”

“Because with two salaries we still couldn’t afford to eat,” David explains.

He resigned a year and a half ago. He served as the pastoral coordinator of the “Faith and Joy of Manak Krú” school. His workload was 36 hours a week and at that time he earned 4,500 bolivares ($4.50), plus a bonus for his coordination work.

I went to the market and there was a moment when I used all of my paycheck, part of my savings and my cesta ticket (a food voucher given by law to employees in Venezuela).”

Now, he works in transportation, although incidentally, he told us his car is currently immobile because it's missing spare parts. He and his wife have a small store in his wife's grandmother’s house, where he sells plastic containers under an awning on the side of the Troncal 10 highway. “For the passing Brazilians,” he says.

I would like to be teaching, that's my thing. I would like for this situation to change and return to teaching because in the country’s current situation, a teacher can’t make a living.”

Nardy teaches preschool at the “Darak Merú” school. She resigned at the end of the last school year, but will continue to work until December because her superiors said, “If you resign, who will the kids be left with?” Now she works at the grocery store selling ice cream and making pound cakes.