Artists and Activists Unite in Support of Russia’s ‘Good People’ 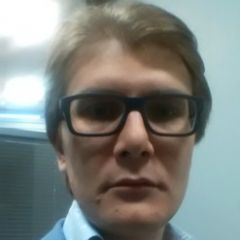 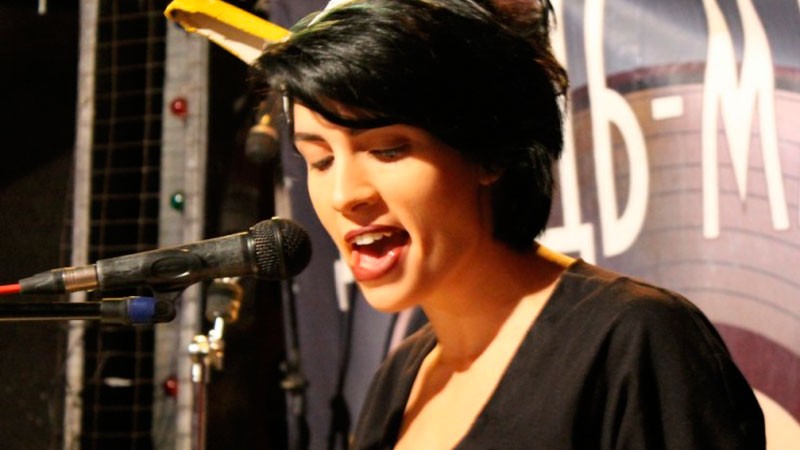 The event was called a “Good People Support Evening,” and it took place on Sunday, January 24, at a small art cafe in eastern Moscow. The good people at issue that evening were various Russian activists currently imprisoned for (what their supporters say are) political reasons.

The event coincided with the birthday of the anti-fascist movement activist Alexey Sutuga, known to his friends as “Socrates.” He couldn’t attend because he's now serving a three-year sentence for allegedly brawling. (Sutuga denies the charges.) Human rights advocates believe the case against him was fabricated, including the Russian human rights center Memorial, which recognizes Sutuga as a “political prisoner.”

‘They're guilty of thinking differently’

The organizer of the event, Vladimir (he hides his last name behind an alias), told Global Voices that Sutuga is his close friend. “Now my friend is in jail, where he celebrates his 30th birthday. I believe that a birthday is a party of friends, and we all need to celebrate it in order to remember Alexey and to lift his spirits.”

And so other activists decided to hold a party, honoring Sutuga and another three men now in prison: performance artist Petr Pavlensky, Dmitry Buchenkov, who was detained in the third wave of so-called “Bolotnaya Square case” (though he says he wasn't even in Moscow at the time of the alleged “crime”), and political activist Ildar Dadin, who is the first Russian demonstrator to be convicted and sentenced to prison under a new law that makes it a felony to participate in multiple unsanctioned rallies.

Each of them, Vladimir said, was arrested and imprisoned for his political ideas.

Most of the speakers were already familiar with what they call “the Kremlin's oppression machine.” Vladimir Akimenkov, Andrei Barabanov, Denis Lutskevich, and Alexey Polikhovich were all convicted at various stages of the “Bolotnaya Square case,” and all of them spent some amount of time in Russian detention centers, prison colonies, or both. The speakers not only reached out to Sutuga and the others, but they also recounted their own experiences and encouraged people to send letters to their comrades now in state custody.

Sutuga’s mother gave an emotional address, and his lawyer (who is also defending Buchenkov) described the absurdity with which activists are prosecuted in Russia. Then came the musical portion of the event, which featured performances by several artists, including (most famously) Pussy Riot's Nadezhda Tolokonnikova, who sang a self-composed song dedicated to Pavlensky.

According to Vladimir, his aim was to hold a social-cultural event that focused on people. He didn't want an exclusively political function, and he told Global Voices that the number of people who came to show their support was inspiring. “I’m happy we did not lose our human kindness. Friendship, solidarity, and mutual aid are stronger than any prison, fears, or government oppression,” he said. 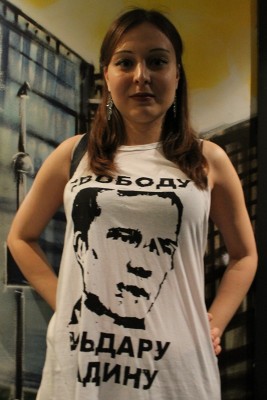 When it comes to politics and women's courage, Russians often recall the Decembrists’ wives, who accompanied their husbands into exile, to Siberia, after the failed rebellion against Tsar Nicholas I. Almost two centuries later, things haven't changed as much as you might expect. Consider Anna Koroleva and Anastasia Zotova, the partners of Dmitry Buchenkov and Ildar Dadin.

Anna Koroleva, a shy, black-haired woman with piercing eyes, told Global Voices that Dmitry was arrested just before their engagement. Even the long arm of the law didn't stop their marriage, however, and soon the two were wed. “This was just the logical conclusion of what was supposed to happen,” Anna says today, looking back at how she came to be married.

Anastasia Zotova, who attended the event in a t-shirt with her fiancé's face imprinted on the chest. She says they decided to get married a year ago, after Ildar was detained on Manezh Square in Moscow. When he was sent to prison, he asked her if she still wanted to become his wife. “I punched him and said, ‘I love you, I won’t abandon you,’” Anastasia remembers. Today, she admits that she’s never thought of herself as a “Decembrist’s wife”:

I’m fond of Tolkien's books. There was a story about an elven princess who saved the knight she loved. She entered the tower, began to sing, and the tower collapsed, setting the knight free. I wish I could go to the detention center [where Ildar is now captive] and sing, so the whole thing came down.

‘Art changes the world—there's no doubt’

On January 27, Petr Pavlensky was transferred to the Serbsky State Scientific Center for Social and Forensic Psychiatry,where he'll undergo psychiatric evaluation. Last year, Pavlensky was charged with vandalism after setting fire to a door at the headquarters of Russia's Federal Security Service in Moscow. He's being prosecuted for burning tires atop a bridge in St. Petersburg. (That trial began in mid-2015 and isn't yet finished.)

Three days before Pavlensky was transferred to the psychiatric center, his partner, Oksana Shalygina, read aloud a letter he wrote from his cell in the detention center. According to Pavlensky, people’s fears and needs are commonly used to gain control over them: “The fear of punishment and fear of losing your belongings are the main [social] management tools. And, as for one’s needs and craving for things, they just tighten the noose of submission and obedience”:

The statehood doesn't hide itself here, as it needs no more decoration. The concern about safety is brought to its logical completion. […] They also cultivate one's habits in order to create an automatic obedience reflex coming from within, without any external hints. They are aimed at stopping your thought process so you can't think independently. When one starts to hesitate and finally obeys, the system wins.

In his art, Pavlensky works with ideas and meanings, using instruments mirrored on the tools at the disposal of the government, he says. His performances show how government leads a person into submission, though he insists that obedience is, ultimately, still the individual's choice. “His role is to show that one either obeys or moves towards self-deliverance and self-emancipation,” Shalygina explained to Global Voices.

Can individuals motivated by passion like Pavlensky's disrupt Russia's status quo? Shalygina thinks so, and so does Masha Alekhina, another leading member of Pussy Riot and the cofounder of MediaZona, a news site that focuses on Russia's criminal justice system. “[Social] art has connections with politics, the regime, and all events around us. We interact and create through [our] every gesture and action. Art changes the world—there's no doubt. Only art is capable of changing it,” Alekhina said, smiling.