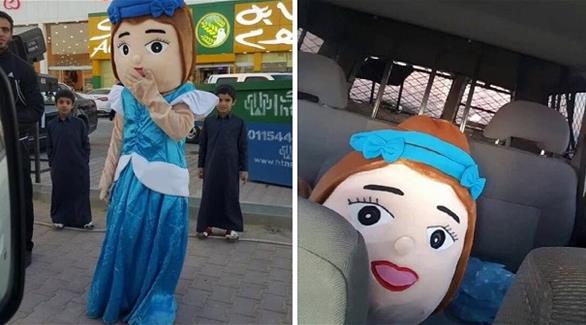 Saudi Arabia's vice police arrested this mascot at the opening of a sweet shop because .. it wasn't wearing the Islamic attire

Saudi Arabia's Committee for the Promotion of Virtue and the Prevention of Vice, or religious police, arrested a female mascot at the opening of a sweet shop in the capital Riyadh because it wasn't wearing the Islamic attire enforced on women in the conservative kingdom. What was worse, was that the mascot was actually a man, pretending to be a woman, who was not covered, and who was making inappropriate gestures with a male mascot which was accompanying it.

On Twitter, netizens laughed and joked at the incident, complaining about the eroding freedoms left for people. Many could not even bring themselves to believe that this incident actually took place.

They arrested a mascot???

Is it for real? Yes, it is. The religious police actually arrested a mascot and reactions to this arrest can be found under the hashtag #الامر_بالمعروف_تعتقل_دمية which translates to #Vice_Police-Arrest_a_Mascot.

Naifco, who has 216K followers on Twitter, shares this circular from the Vice Police with more juicy details about the incident:

On this day, we received a number of reports about two dolls, one a man and the other a woman, which were making unacceptable gestures in front of Sanabil Al Salam shop and their presence attracted a huge crowd on the King Abdulla road. We went to the said location and witnessed the two dolls doing what the complaints said. We found a man in the female mascot and after contacting the superintendent of the Kharj area, we spoke to the man (in the doll) and made him and his supervisor write a statement that they will not repeat this again and we reminded them about Allah and that what they did was pretending to be women and that is against sharia (Islamic law). They expressed remorse and asked them to accompany us to the station, to complete the formalities.

For many, the incident was an opportunity to complain about dwindling rights in the ultra-religious kingdom. Aziz Alqenaei laments:

The arrest of intellectuals; women's rights; flogging and stoning; implementation of Sharia law; and now the arrest of a mascot for not complying with Islamic attire. It is painful that Muslim's causes are now issues that the civilised world has moved away from

Whoever reads about the increasing record of inhumane trespasses will still be surprised that a mascot has been arrested? Never. We are not surprised.

Would you blame anyone for carrying the story?