Is Taiwan a Country, a Self-Governing Island, or a Breakaway Territory or Province of China? 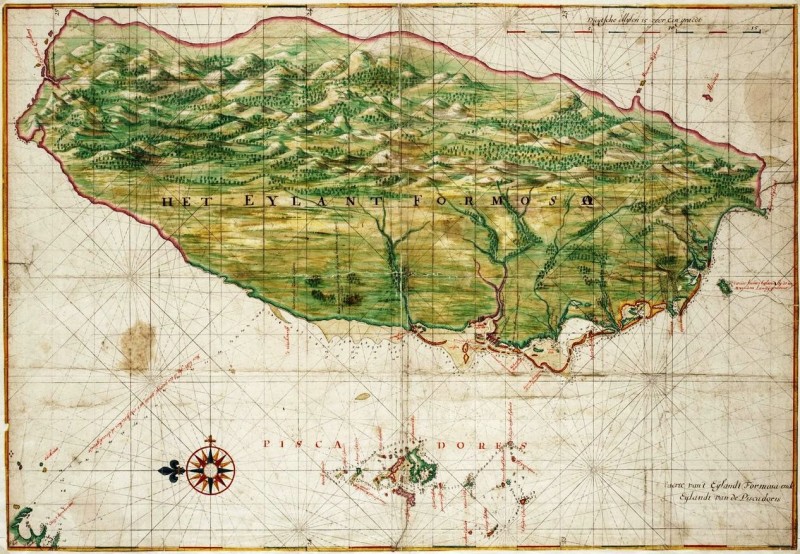 ‘The Island Formosa and the Pescadores’, depicted by Johannes Vingboons in around 1640. Formosa is the name given to Taiwan by Portuguese explorers who sighted the island in the 16th century. PHOTO from Chinese Wikipedia.

A German friend once asked me about the sovereign status of Taiwan, and I told him that Taiwan is a country because we elect our own president and legislators, and we have our own currency and passport.

My friend bought what I said, but his wife didn’t. She is a political scientist, and based on what she heard about Taiwan, she thought the relationship between China and Taiwan bore more similarities to the relationship between the East and West Germany. In other words, as Chinese and Taiwanese can communicate in Mandarin and as the two countries’ cultures are so similar, it would have made sense for China and Taiwan to have pursued reunification after the Cold War ended.

I argued that a better comparison was the relationship between the UK and US. The British and the Americans share a similar language, and a certain percentage of Americans were actually British before their war of independence. Americans, nevertheless, claimed their independence because they—or at least their founding fathers—subscribed to a different political ideology. Taiwan, likewise, embraces a democratic political system, while China’s political framework is that of a socialist republic run by the Communist Party of China (CPC). China is a great country. Like many countries in the world, Taiwan also wants to make friends with China. However, many of the 23.4 million Taiwanese prefer not to unite with China because we embrace different political systems. What has happened between Hong Kong and China proves that it does not work.

A selection of recommended books, films, and musical works about Taiwan:

Tyzen Hsiao’s symphony ‘Taiwan the Green’: Many Taiwanese refer to this as the unofficial National Anthem of Taiwan.

Formose: French-language illustrated storybook by Li-Chin Lin depicting the author’s childhood and adolescence during the White Terror period in Taiwan.

‘A City of Sadness’: Film by Hsiao-Hsien Hou that tells a story related to the incident that triggered the Republic of China’s military repression in Taiwan, after Japanese surrendered.

‘Warriors of the Rainbow: Seediq Bale’: Film by Te-Sheng Wei about the revolt by Taiwanese Aborigines under Japanese colonialism.

China, or People’s Republic of China (PRC), always claims that Taiwan has been part of China from the very beginning, but it is not true if we check history records. Taiwan became part of China during the period of the Qing Dynasty in 1683, and the Qing government did not seriously govern Taiwan except collecting heavy tax from Taiwanese and using military forces to repress ‘insurgents’. It was not until 204 years later, in 1887, that Taiwan was made a province.

At the end of World War II (WWII), the Republic of China (ROC) took control of Taiwan after Japan surrendered. Taiwan was a colony of Japan during the Kominka movement or Japanization of subjects of the Empire of Japan. Since Japan was an enemy of China during WWII, the ROC government had difficulty considering Taiwanese their fellow countrymen. Taiwanese did not even speak Mandarin at that time.

During the Chinese civil war (1946-1950), the Kuomintang (KMT), led by Chiang Kai-Shek, decided to consolidate the power of his exiled government in Taiwan after it was defeated by the CPC’s People’s Liberation Army in China in 1949. During the period of White Terror (1949-1987) and after, the Taiwan democracy movement took decades to build a free and democratic society. They finally succeeded, and in their quest for a new society, forged a new Taiwanese national identity that is quite different from China’s. 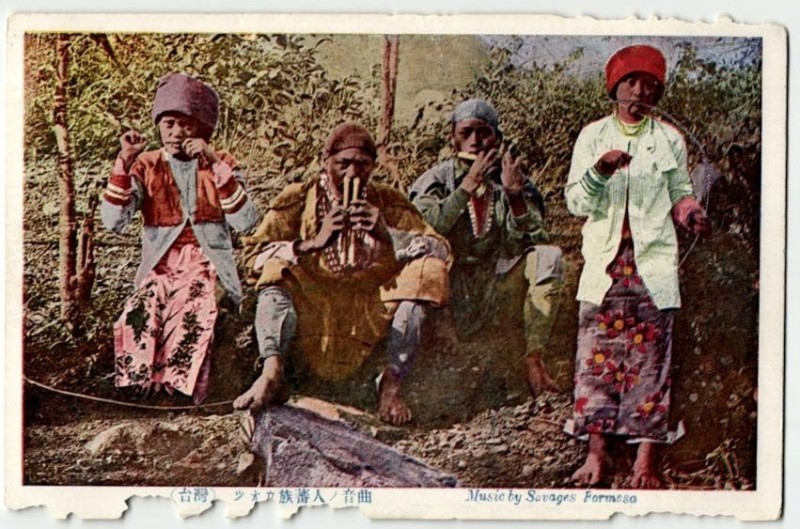 Before 1683, Taiwan was inhabited by Taiwanese aborigines, who are very proud of their role in the history of Polynesia. Studies of genetics, pottery styles, languages, and the existence of plants such as the Pacific paper mulberry suggest that the Lapita, the ancestors of those who would go on populate Polynesia and Micronesia, very likely lived in Taiwan before they traveled to other islands. For Taiwanese, the question of finding aboriginal bloodlines in our genealogy is central to discussions about Taiwan’s independence, because there is evidence that very few of the Han Chinese  who moved to Taiwan during the Qing Dynasty period were female.

Underlying the debate about bloodlines is an idea about historical viewpoints and their role in forming national identity. Taiwan’s history is generally viewed from two different perspectives: one that is China-centered, the other Taiwan-centered. According to the China-centered version, China was kind enough to bring Taiwan back into the family after WWII. In the Taiwan-centered version, both the Chinese and the Japanese empires were colonizers. 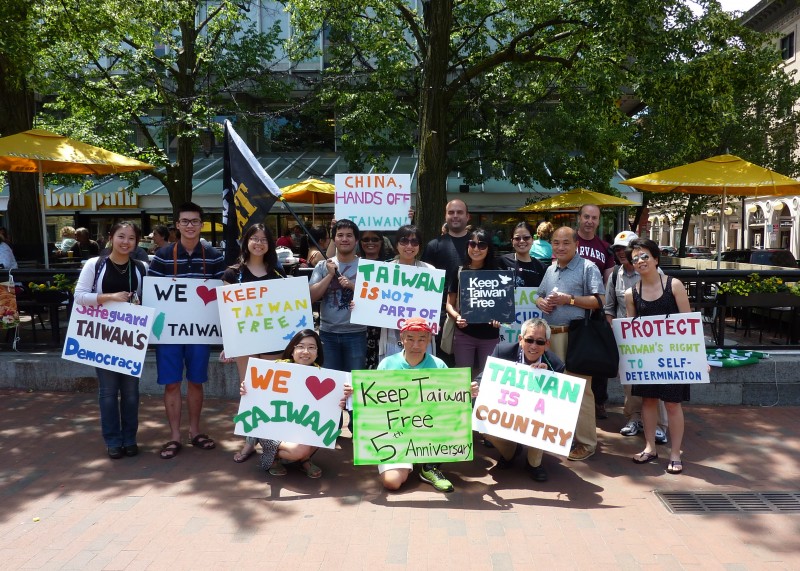 An outreach event by Taiwanese and supporters at Harvard Square in Boston that explained Taiwan's situation to interested passers-by. Photo by Chia-Chun Chung. Republished by Global Voices with permission.

Let us return, however, to the question of whether Taiwan is a country, a self-governing island, a breakaway territory of China, or a province of China. It is a difficult question for diplomats and journalists, and it is not an easy one even for Taiwanese.

Firstly, it is true that Taiwan was—for that brief eight-year period before WWII—a province of China. But Taiwan is not currently a province of China, as China has no control over Taiwan. This is the political reality. To clarify the situation further we can refer to the history of Mongolia. Mongolia was once part of China under the Qing Dynasty, pursuing its independence in 1911 and became an independent country later on (a long story). No one would say that Mongolia is part of China just because it was part of China more than 100 years ago.

Yet some still insist on calling Taiwan a province of China because China claims so. Many agencies still use the formulation ‘Taiwan, Province of China’, either out of ignorance or because they enjoy close relations with China. To counter the China-centered viewpoint, some Taiwanese spend lots of time writing to these agencies in order to persuade them simply ­to use the term ‘Taiwan’, without further political attribution.

The terms ‘self-governing island’ and ‘breakaway territory’ are more widely used in international media reports that refer to Taiwan’s sovereignty status. ‘Self-governing island’ at least has the virtue of being relatively neutral, but it's also inaccurate, as the territory of Taiwan comprises several islands. ‘Breakaway territory’ (or ’renegade province’) is a formulation of the English-speaking world. According to the China-centered historical view it's not incorrect, but it sidelines the Taiwanese-centered view of history. In Taiwan, it's likely to offend the pro-independence community.

Taiwan’s sovereign status is tricky in many ways. Even though we Taiwanese possess almost every attribute of a ‘nation’, we have very few diplomatic allies. Taiwan is recognized by only 22 nations as a sovereign state, and diplomatic allies of the PRC are strongly requested not to recognize Taiwan a sovereign state even in non-diplomatic international events like film festivals. As a result, Taiwan is not a member of the United Nations, nor even of the World Health Organization (WHO), and it's the rare international mainstream media article that refers to Taiwan as a ‘country‘.

Thanks to Sophie Hsu, Brian Hioe, and Oiwan Lam for the valuable discussions and comments about this article.