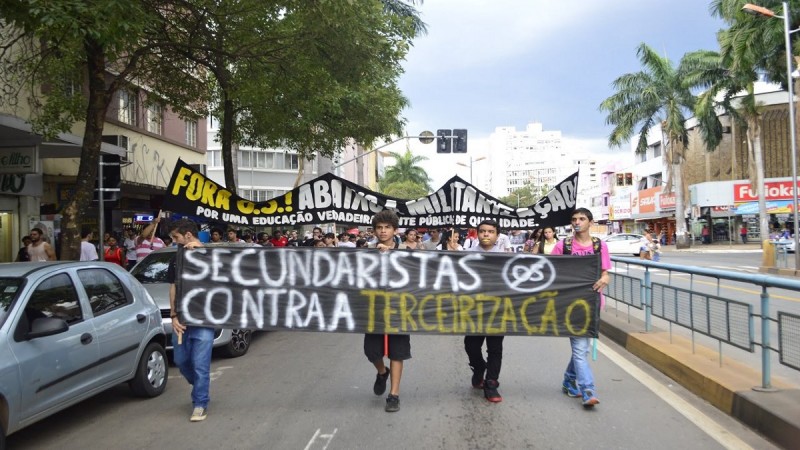 For the past week, there's been a slew of reports about threats and police violence in schools in the Brazilian state of Goiás (near the federal capital in Brasília), where high schoolers have occupied buildings since late last year.

On January 14, a local court in Goiás ordered the repossession of three schools in the state capital of Goiânia and the city of Anápolis. The students say they were violently ejected from the schools by police with the help of some students’ parents and the school administration. Most of the occupy demonstrators were between the ages of 13 and 16.

The students were protesting against a government plan to transfer up to 30% of the administration of the schools to private organizations (called OS, or Social Organizations) and the military police. (In Brazil, some secondary schools are run by the armed forces or the police—a policy many educators strongly condemn.) In September, the Committee of the UN Children's Rights issued a report on Brazil stating concern about the presence of the private and military sectors in the country's basic education system.

Inspired by the student movement of São Paulo (which managed to repeal a government measure that would have closed an estimated 90 schools), youths in Goiás began to occupy their schools late last year. Unlike the mobilization in São Paulo, however, the movement in Goiás received little coverage in the national press, with attention restricted to social networks and local media. 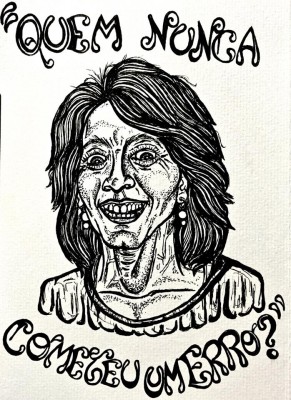 Caricature of Goias’ secretary of education, Raquel Teixeira, who cut off the water and energy to occupied schools and, when asked, said “who never made a mistake?” Image: Zé Ninguém. Original author unknown.

On January 25, students in the city of Goiânia attending the Ismael Silva de Jesus school reported that police officers climbed over the school fence and attacked the occupiers. According to the Facebook page of Secundaristas em Luta – GO:

At this moment the students, still injured, are resisting at the school gate while suffering violence from members of the community. Two occupiers were bowled over at the door. And one of the students that was hit went to the hospital with an exposed fracture.

One supporter of the movement, Mariana Barbosa, who also works at Federal University of Goiás, says she arrived at the school minutes after the incident. She confirmed on Facebook that students were attacked and ejected by police officers and some members of the local community. After the assault, the authorities took to a loudspeaker and announced that the 2016 school year was open for enrollment.

Barbosa said police threatened her, too, when she was helping beaten students to the local prosecutor's office, so they could file formal complaints:

As we passed a pretty empty street a little farther away from the school, our cars were approached by three other cars. They didn't have any police identification—not even in the vehicles, much less on their uniforms or police badges. They approached us, left their cars with guns in their hands, and told us to pull over and put our hand on our heads. So we did. They treated us with great brutality. They shouted at the children, wouldn't let us use our phones to call a lawyer, they searched the cars, searched our bags, and tossed the kids’ stuff in the road.

In one video circulating on social media, a high school student described the police response at the Ismael Silva de Jesus college:

On January 25, police also targeted the state college Rui Barbosa, which had been occupied two days before. On the Facebook page Ocupação Rui Barbosa, students said they were expelled from the school violently.

On January 26, students from the Lyceu de Goiânia denounced a deliberate disruption of one of the school's gas pipes (the authorities were trying to sabotage the occupation).

Today we sensed a very strong smell and when we went looking for the problem we found Lyceu's gas pipe sawed open, leaking, READY TO EXPLODE. Access [to the gas pipe] is easy for people on the street. They jumped [the wall] and sabotaged the pipe.

While we were aware of the direct violence ~that we have already begun to suffer~, and even though we knew we would be victims of oppression and marconista dictatorship [after Goiás Governor Marconi Perillo], we did not expect them to do something so serious against the movement.

This situation is very serious, putting at risk the lives and physical safety of the occupiers.

On the evening of the January 26, students protested at the headquarters of Goias Secretariat of Education (SEDUCE) and some still remain camped on site. According to the Facebook page of Zé Ninguém, who's been posting videos and photos from occupations:

After a day of brutality, police violence, repossession without a court order, and the extreme of a MURDER ATTEMPT, students, teachers, and supporters put a stop to government authoritarianism, which privatized public education without opening any dialogue or even a public hearing.

The building of SEDUCE has just been OCCUPIED by dozens of people!

Also on Facebook, Professor Rafael Saddi said that he and other teachers who support the movement are being persecuted by local police:

I just wanted to say that the police delegate who is leading the operation aims to incriminate me along with other teachers and students, [accusing us] of [forming] a criminal organization, corrupting the youth, damaging to public property, and stealing. (Framing me for breaking into and robbing schools—can you believe it?!) This is the same delegate who led the operation 2.80, where three students were arrested in the struggle for public transportation.

The Facebook page for Secundaristas em Luta – GO denounced Goiás’ Child Protective Services based on rumors that it has been calling students’ parents and threatening them. Teachers of the UFG (Federal University of Goiás) published a statement rebuking all violence against students. On social media, many activists have expressed their support for the statement.