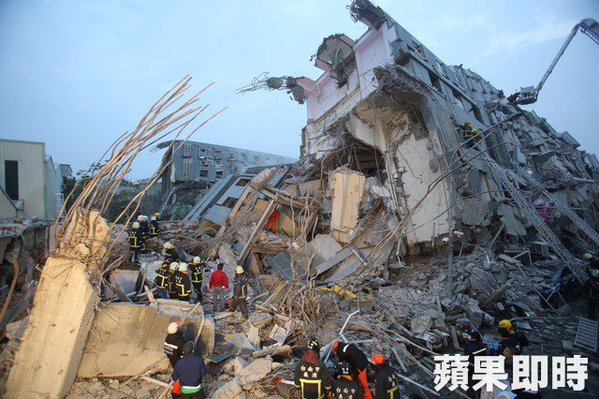 A 17-storey building collapsed during the 6.4 magnitude earthquake in Tainan on February 6. Photo from Apple Daily. Non-commercial use.

A 6.4-magnitude earthquake struck southern Taiwan on February 6, just ahead of the Lunar Chinese New Year, the most important festival among Chinese. International and domestic rescue teams have continuously been searching for survivors in the ruins for two days. Hundreds have been rescued, but at least 38 people have been confirmed dead and more than 100 people remained missing on the first day of the Lunar New Year.

Most of the victims were from a 17-storey apartment complex in Tainan city. The building collapsed during the earthquake, and hundreds of residents were buried in the ruins. Below is a local TV footage of the major earthquake damage:

While the rescue work continues non-stop, the Tainan city government has started an investigation into the quality of construction materials of the building.

The news of the Tainan temblor quickly traveled across the strait to mainland China, where Web users pointed out the difference they perceived between Chinese relief work and what they were seeing in action on the ground in Taiwan.

In such a tightly controlled environment as China, mainland Chinese media must stay positive and avoid criticizing their country's authorities when reporting on local disasters, such as last year's Tianjin explosions [2]. In the case of the Tainan earthquake, readers noticed that Chinese Communist Party mouthpiece Global Times highlighted the possible poor construction problem of the 17-storey building that had collapsed. While some echoed the media outlets in criticizing the Taiwanese authorities and the supposed failure in governance, others mocked the double standard of state- and party-affiliated media.

Given the strict censorship measures that China has put in place on social media, mainland Chinese netizens could not openly compare disaster relief work in China and Taiwan. Instead, they shared one of the Tainan city government's progress reports on earthquake relief work on social media to show how democracy makes a difference in recovering from a disaster. The progress report [3] presented detailed updates on the calamity, the locations of newly set-up relief centers and the number of relief team members in each affected district. The reports are released to the public a few times a day.

In mainland China, disaster reporting typically spotlights the country's leaders coordinating the rescue work in the affected area and doesn't mention any of the concrete details of the relief measures. Mainland Chinese netizens spotted the difference when reading the Tainan progress report. Below are some of the comments on the report:

The first time I've seen such a clear report, all this information is wanted by the public.
This is the advantage of democracy.
All departments have their own role. They do not need the president to coordinate. To be frank, the president is not an earthquake expert, his coordination will only mess up the relief work.
So concrete, transparent and efficient.
This is substantial work. There is no need for anyone to give orders, no need for anyone to pay special attention, no need for anyone to express concern or care, all the focus is on rescue work.
Detailed, concrete, no bureaucratic speech.
No special attention from leaders – no long list of officials visiting the affected areas – this is the difference between the two governments in social governance.

Patriotism to the unsympathetic extreme

Meanwhile, the day after the quake, Chinese President Xi Jinping conveyed his condolences [4] to the families of the victims, stressed the blood ties between Chinese in Taiwan and in China and offered assistance for the disaster relief work.

While some Chinese observers anticipated the relationship between Taiwan and China would be tense after Tsai Ingwen, the leader of the opposition party, won the Taiwanese presidential election last month, Xi's comments on the blood ties linking Chinese across the strait was viewed as a show of good will. Though Taiwan has had de-facto sovereignty for decades, the Chinese government insists it is an inseparable part of China.

But the friendly gesture was sullied by overly zealous mainland Chinese Web users who were eager to defend their country against “separatists”.

Hoping that all Chinese in Taiwan are safe, and all the Taiwan independence advocates are shaken to death!
This is the right time for the People's Liberation Army to act and rescue. Send the navy aircraft carrier to rescue them. People from mainland China will donate and pray for you. [The comment implies that China should take advantage of the moment to take control of Taiwan with military force.]
I want to clarify, this emoji [placing two palms together] is not praying, but ‘give me five’, a celebratory gesture.
Old people are saying: with a woman in control, the house will collapse. Tsai Ingwen should step down.