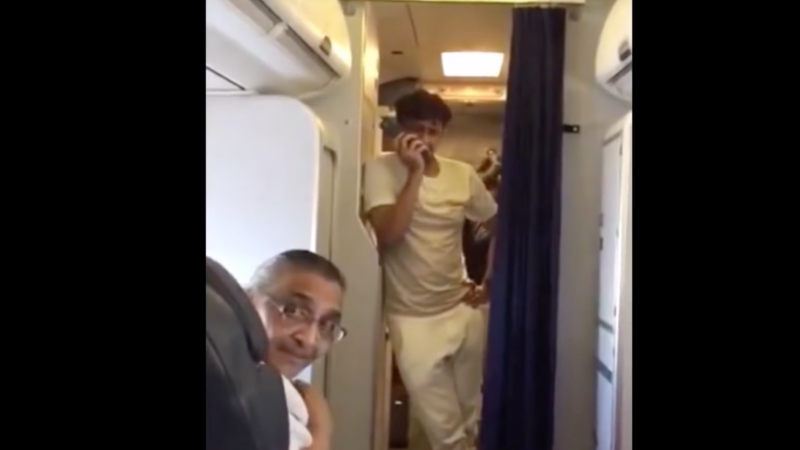 Sony Nigam's impromptu concert on Jodhpur Mumbai Flight. Click on the screenshot to watch the video.

The video, taken by a passenger on a mobile phone, went viral after it was posted to YouTube and has been viewed over 170,000 times at the time of writing.

It features the singer singing using the in-flight public address system and some of the audience standing.

According to reports when co-passengers requested him to sing for them he took over the mic of the cabin PA system and sang a couple of his hits.

Many passengers appeared perplexed at first before bursting into applause and shouting cheers of encouragement.

Even though the video was shot a month back on January 4, it only came out in public recently. Following a request by The Directorate General of Civil Aviation (DGCA) officials the airline have temporarily suspended the all-women crew that was present on that flight.

Skonu Nigam, one of the highest paid Indian playback singers, has sung and acted in several Indian movies and released pop albums. He was nominated for the Oscars in 2015 along with composer Bickram Ghosh for their composition in the Hindi movie Jal.

On social media Jet Airways were accused of an overreaction.

What an idiotic move. Is Sonu Nigam a terrorist? He wasn't itching to sing. Passengers requested. Pls revoke. https://t.co/4j0uEtXB46

We really need to grow up! Flights tend to be boring – so what if Sonu Nigam sang a song? How is that a “security threat”? #JetAirways

Some users supported the step in favour of passenger security:

let's not waste on Sonu Nigam anymore
I suggest he b punished along with d pilot. if Pilot wa not aware of cabin drama, it's security risk

There's no justification for Sonu Nigam's act! Aviation security should be of utmost importance & it should not be compromised!

Rules are for everyone. PA system is kept for a specific purpose and this is a misuse. There maybe lot of passengers in that plane who don't give a damn about Sonu Nigam or his songs and this is nuisance to them. period.

In a public statement Nigam said:

I have witnessed an elaborate fashion show in an aircraft. I have heard of small concerts happening in an aircraft. I have seen pilots and crew members cracking humorous jokes to loosen up passengers in other countries, which is so cool. To suspend crew members for asking me to sing on the address system, when the seat belt signs were off, and no announcements were to be made, is nothing less than punishing someone for spreading happiness.[..]Indians, need to loosen up. This act of lack of common sense, according to me, is real intolerance.[..]

Apart from many posts supporting the airline's decision to respect the law and passenger's safety, and many other comments opposing the crew members’ suspension, the event showcasecd Indian Twitter's humour.

Akshar Pathak wrote a series of witty tweets inserting words connected with air travel into some of Nigam's most popular songs:

Jet Airways, in a recent tweet, has confirmed that the crew members have be grounded temporarily but will resume in their jobs after a “relevant” briefing/training: