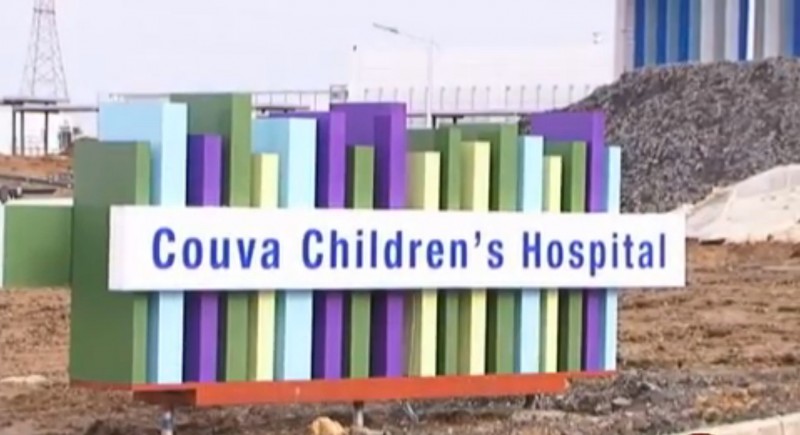 Screengrab of signage for the Couva Children's Hospital in Trinidad, taken from a CNC3 news broadcast.

Initially, the expected completion date for a specially designated medical facility in central Trinidad dedicated to the care of children was March 2015, but the opening of the Couva Children's Hospital [2], nestled in the political heartland of the country's previous government, was delayed.

On August 14, less than a month before the country's general elections, the hospital was officially opened [3] by Trinidad and Tobago's then-prime minister, Kamla Persad-Bissessar.

Though commissioned, the hospital was not completed and therefore was never actually available to the public [4].

While the new government dealt with criticism [5] from the opposition [6] over not allocating any money in its 2016 budget for the hospital's completion, the new finance minister, Colm Imbert, insisted that the financial arrangement for the facility was a government-to-government one with China.

The new administration was therefore under no obligation to continue to fund it, especially since, Imbert told the now-Leader of the Opposition, “I assume that you opened a complete facility.”

Imbert also stated his intention to launch an investigation [9] into why hundreds of millions of dollars in state funds were being used for a project that was meant to be fully funded by the Chinese Government.

Now, to add to the opposition's woes, part of the roadway leading up to the hospital has collapsed, causing a political firestorm.

There has been a lot of speculation [10] as to what exactly caused this to happen.

Some fear that the collapse is a result of bad work done on the road or is due to the hospital being built close to the Central Range earthquake fault line.

Piece of the roadway collapsed today on the compound of the Couva children's hospital @CNC3TV [11] pic.twitter.com/baN9JvZMUl [12]

I just saw that the road to the Couva hospital collapsed… 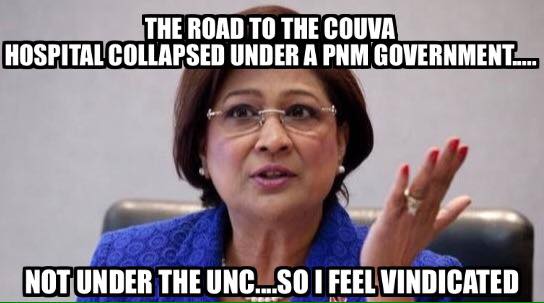 We money get wasted on the hospital and we have to spend more money to repair its roads that have not been used, just now it […] collapsed and we have to pay for the hospital being built on a fault line. Kamliar (Kamla) and her forty brigands should be held responsible for this and not [hold] the country at ransom for their deficiency. Oh what a waste of hard working tax dollars gone in boball [sic: ‘bobol’, meaning ‘corruption’] and this is not the breakdown of the beginning of the corruption of the PP (People's Partnership) government, whew!

The facility stands on a 60-acre parcel of land which used to belong to Caroni (1975) Limited [17], the old state sugar production company.

Costs on the project reportedly amount to an estimated TT $1 billion (just under US $155 million).

Construction was kickstarted in 2012 by the Shanghai Construction Group [18] and the hospital was supposed to be fully operational by January 2016 after full training for staff was completed, in addition to other final touches.

Instead, the opening was further delayed due to staffing and budgetary allocations for operating the hospital.

There was a lot of controversy surrounding the rush to build and “open” the hospital before last September's elections.

Way back in 2013, one Facebook user left a comment [19] on the facility's page supportive of the government's plan to build the hospital.

Many children have died over the years because of the danger of travelling while ill. This is a dream come true for parents like myself and others. To my Honourable Prime Minister thats the greatness of your heart, thats why the people of this nation love you so much. Thanks for the dream becaming a reality.

The road to that dream has now collapsed — literally.

Prime Minister Dr. Keith Rowley slammed the poor work done on the roadway in a statement to the media [20] on February 2:

The Couva hospital is a construction site, the last information I have is that by the end of March, the contractor would have completed the construction. What you are seeing there is that those election arrangements are unfolding a bit more.

A Facebook post by Speak Out T&T suggested [21]this was an accident that was always waiting to happen:

Flashback: the UNC was warned by local and international seismic experts NOT to build the hospital at its current site […] because it is right next to the active Central Range Fault (CRF). […]

But they built the hospital anyways, simply because its current location serves the UNC's PR campaigns. A government who truly cared about Healthcare and the nation's children would have taken the almost $4 billion the UNC spent on the Teaching Hospital and the Children's Hospital and build a brand new San Fernando General, a brand new Port of Spain General, completed the specialist centers in Mt. Hope and STILL have money to upgrade health centers across the country.

‘But the hospital was built so the PNM should just open the hospital for people's children. Except, no. According to UDECOTT, the building was not built to code, is on moving soil and an active fault line so putting people's children in there is the most dangerous thing the government could do. The government must take this time to ensure that the building is safe, which means spending money that we don't have. Thank you Kamla. Thank you UNC. ‪#‎Fraud [22]‬ ‪#‎Childrens [23]‬ ‪#‎Hospital [24]‬

Opposition Senator Khadijah Ameen [25] made a different claim, saying that the work was done properly [20], but the roadway collapsed as a result of the construction of a retention pond that was recently built under the present government.

Finally, in a letter [26] to the Trinidad Express newspaper, one citizen, Thelma Joseph, indicated with sarcasm what she thought of the government's priorities:

I fully endorse the views of our Prime Minister Dr Keith Rowley that priority must be given to investment for the completion of vital and important projects like the Brian Lara Stadium.

A completed stadium would allow the population to be in an environment which will keep us physically fit with less stress. […]

With a healthier nation there would be no need to waste further investment to complete projects like the Couva Children's hospital.