Calls for Civil Disobedience in Australia Over Children's Offshore Detention 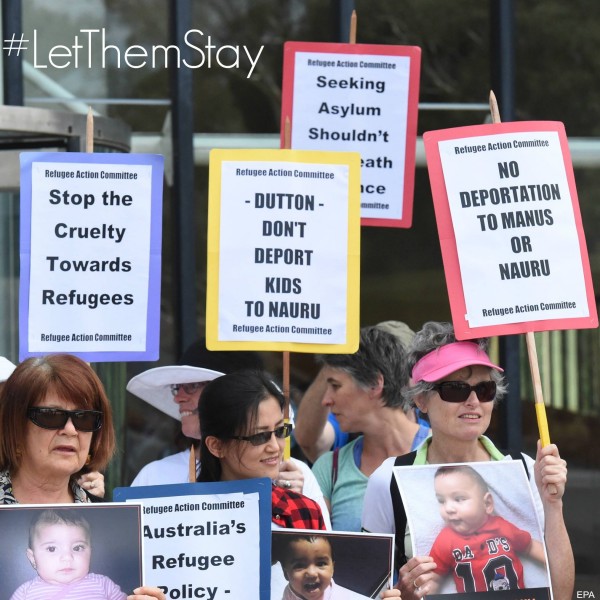 UPDATE: The ABC (Australian Broadcasting Corporation) has corrected its report of the alleged rape of a five-year-old boy. The alleged victim was actually over 10 years of age and suffered “skin to skin” contact, according to Immigration officials.

A High Court decision upholding Australia's offshore detention system for people seeking asylum has prompted calls for civil disobedience. Many people are particularly outraged that there are 80 children including 37 babies among 267 people currently facing deportation. Among them is a five year-old boy allegedly raped on Nauru.

A campaign focusing on the children, based on the theme of #LetThemStay, had commenced before the judgment.

First Dog on the Moon's cartoon for the Guardian Australia captured the widespread revulsion:

“I'm not sure I can do this any more” @firstdogonmoon cartoon on the children and babies to be returned to Nauru https://t.co/q1zhoJucsa :(

The current policy for ‘border protection’ is aimed at refugee arrivals who come by boat. It has two main arms:

1. Offshore detention on either Nauru or Papua New Guinea's Manus Island, with the aim of resettlement in regional countries for those successful in their asylum claims. Essentially anywhere but Australia. Most remain in detention centres because of the lack of acceptable countries for relocation.

2. Turning back of refugee boats heading for Australia.

The stated goals include defeating people smuggling and ending deaths at sea.

The BBC canvassed the broader issues in a November 2015 article Australia asylum: Why is it controversial? Public opinion is divided:

Domestically, asylum is a hot political issue. Polls have shown that a significant number of Australians approve of taking a tougher stance

The Australian Human Rights Commission also has an online guide for anyone seeking detailed information.

Staff who work or have worked at the island detention centres are prevented by law from commenting on their experiences. This has not prevented a number from speaking out. This video presents the views of Sydney paediatrician Hasantha Gunasekera:

The doctors have strong support as founder of the Asylum Seekers Resource Centre indicates:

Following the court decision, several churches have been offered as sanctuary. The Anglican dean of Brisbane has taken a leading role, defying a possible ten year gaol term:

Michael Short, columnist at Melbourne's daily newspaper The Age, was one of many who has called for action:

He was not alone:

Govt has failed us. It's up to us now. It's time for mass civil disobedience #letthemstay #closethecamps https://t.co/sPOO0gWYHx

The United Nations Human Rights office was prompt in criticising the situation:

#LetThemStay: #Nauru is not a safe or appropriate environment to send vulnerable people, esp children https://t.co/RQrDJ2bguP

Their Facebook page urged “Australia to refrain from transferring all concerned individuals to Nauru.”

In the latest development Daniel Andrews, the Premier of the State of Victoria, has offered to take in the 267 people:

I wrote a letter to the Prime Minister today. #LetThemStay pic.twitter.com/AtekuC1GYh