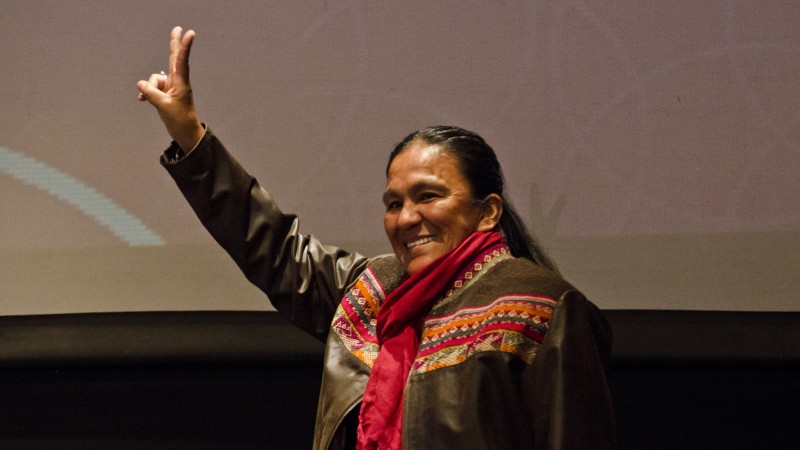 There are many questions for Milagro Sala to answer. Photo: Romina Santarelli taken from Argentinian Ministry of Culture Flickr account under Creative Commons License.

The arrest of social activist and indigenous leader Milagro Sala [2] on January 16 has been the cause of both international outcry [3]and domestic protest [4] in Argentina over the past few weeks. Thousands of people took to Plaza de Mayo in the capital city of Buenos Aires, protesting an arrest they believe violates civil liberties (including the right to assembly).

Sala, who leads the Tupac Amaru Association [5]and serves as a Parlasur [6] lawmaker, was organizing protests in the province of San Salvador de Jujuy when she was arrested. She and many other social organizations set up camp in Belgrano Plaza in mid-December, opposite to the principal government building in Jujuy, protesting against reforms made by newly elected Governor Gerardo Morales to the distribution and control of social benefits. Before these reforms, Sala and her association were chiefly responsible for administering these resources.

Officially, Sala was arrested on two charges: “inciting criminal behavior” among the people in the camp at Plaza Belgrano, and spreading “disorder” by lobbying cooperatives to oppose the governor's reforms by resisting the state's new requirements.

The Center for Legal and Social Studies (CELS) [7] in Argentina and Amnesty International Argentina [8] were among the first to denounce her arrest:

Milagro Sala is a fighter who brings organization and social and political revindication. The kind that the right fears. #FreeMilagroSala

CELS, together with ANDHES [16] (the Northwestern Argentine Lawyers for Human Rights and Social Studies), has already filed an application with the Inter-American Commission on Human Rights (CIDH) on Sala's behalf.

Shortly after her arrest, supporters took to Twitter with #LiberenAMilagroSala (#Free Milagro Sala).

Users were quick to describe her as the first political prisoner in Argentina since President Mauricio Macri took power in December.

Milagro Sala is the first political prisoner of Macri in Argentina.

Some users suggested that her arrest was the result of discrimination because she is a woman and because of her indigenous origins.

Her worst sin is bringing collective conscience to a group segregated by racism in a pseudo caste system.

What they can't stand about Milagro Sala is that she is indigenous, a woman, and she has organized the poor.

Many in the international community have also denounced Sala’s arrest. Members of Parlasur at the Summit of Latin American and Caribbean States (CELAC) and the European Parliament both condemned [24]the arrest.

Officially, newly elected President Mauricio Macri had little to do with her arrest, though he has endorsed the policing measure and met with Governor Morales at the Casa Rosada.

Nonetheless, Twitter users have criticized Macri for hypocrisy, given his objections to the arrest of Venezuelan opposition leader Leopoldo Lopez at the Mercosur conference just a few weeks earlier. The comparison when posed by an Argentine journalist caused Macri to storm out of a press conference in Davos.

You ask to free political prisoners while you keep Milagro Sala in custody.

In his first two months in office, President Macri has faced several difficult trials already, and his critics say he takes an “authoritarian approach” to civil liberties. Police officers in La Plata met demonstrators with rubber bullets [29] after they began protesting job cuts in the region. Protesters assembled twice at Plaza de Mayo before Sala's arrest, demanding changes to media laws [30]and the reinstatement of a prominent dissident who was fired from his radio show [31]. His co-host recently started a YouTube show, where she also calls for Sala's release.

Milagro Sala is a longtime ally of former President Cristina Kirchner. Tensions between Sala and Governor Morales (President Macri's political ally) have been rising since he took office two months ago. Morales says he's bringing an end to a monopoly of power in the province (which was led by Sala and her association until now). According to his campaign platform, he seeks to bring “transparency” the the system, which he argues Sala used to collect money [32] and power. Morales says Sala’s main goal is to the change in power dynamic, achieving some kind of co-government [33] in the province. The governor even says Sala was a mafia-style leader in Jujuy, allegedly getting involved in the trafficking of both drugs and people. [34]

One Twitter user claims that the majority of people from Jujuy support Morales.

Jujuy is no Milagro. Jujuy's people don't support corruption. Milagro Sala is not a political prisoner. She was detained for many causes. Respect the rule of law.

Another called out Amnesty International for defending Sala, saying the organization has failed to offer a full picture of her leadership in Jujuy:

M Sala is known for violence, patronage and graft, corruption. To call her a persecuted politician is to offend those who really are.

Sharing a photograph of a burned out city building, one Facebook [40] user pointed out that Sala's protests weren't always peaceful:

This is how the Governor's Office in Jujuy looked after Milagro Sala protested. This is the act of someone who says she is a pacifist? Is it a felony? Can you protests without starting a fire or running someone over?

There are also videos [41] online showing Sala's often aggressive behavior.
Since Sala's arrest, Prosecutor Liliana Fernandez de Montiel has launched another investigation regarding a complaint made by Morales about the alleged appropriation of $29 million, as part of an advance for a program for social housing not yet built. In connection with the case, police raided Sala's home and offices earlier this week.
These are not the only claims made against Sala regarding money. She's also accused of receiving three different salaries from the state, and Twitter users have recently mocked her, following revelations that she owns a smart car worth $28 million pesos.

Milagro Sala is the perfect synthesis of how kirchnerism [after the former Kirchner government] understands political militance: she earned three salaries from government

This is the new model of smart.

To demand Milagro Sala's liberation, I propose that we all go in a rally honking with our smart [cars]

Political commentator and left wing activist Fabian Harari agrees [48] that there are many questions that Milagro Sala must answer. He highlights that her arrest however is related to her protest and this is what sets a dangerous precedent.

Milagro Sala has to answer many questions. But not for organizing a camp, or blocking roads. That's not a crime—it is a most important right. Milagro Sala really should respond [to charges of] criminal behavior, but [regarding crimes] against the working class—crimes that that far exceed the accusations made by Governor Gerardo Morales.

The state hired and will continue to recruit in black, without social security, with pensions, and without any right to organize, as Milagro Sala does.

Moreover, bourgeois politics in Argentina always used corrupt businesses as a source of funding and street gangs as an element of coercion. It will not stop. That is, Milagro Sala's wrongdoing is the stuff of Argentina's politics. Herr responsibility is to an entire class. Gerardo Morales and Cambiemos are not against this. They simply want to be the beneficiaries.

The different narratives over Milagro Sala and her arrest show the continued political divides in Argentina between supporters of the former Kirchner government and the current regime. The Argentine TV show “Intratables” is shown every night from Monday–Friday, when political analysts, journalists, and politicians are invited to discuss the most important issues of the day. The following video clip is from one episode that demonstrates the show's heated nature.