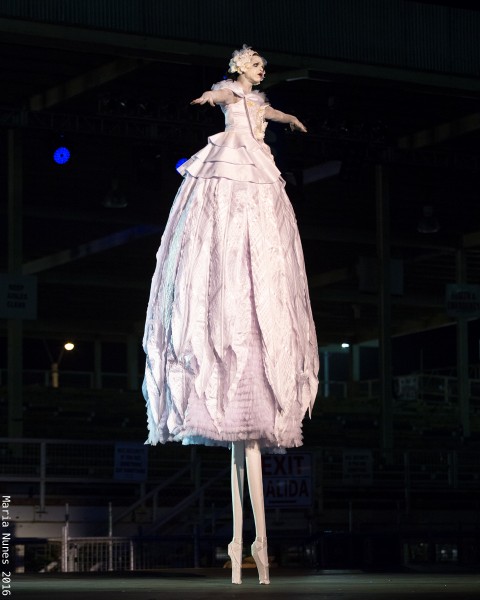 What does an early 20th century ballet solo have to do with Trinidad and Tobago Carnival? Ask Peter Minshall, designer extraordinaire. His intermittent hiatuses from the spectacle of Monday and Tuesday's Parade of the Bands — led by kings and queens in magnificent costumes — have left a gaping hole in the creativity and symbolism of the masquerade, to the point where many enthusiasts feel that the festival has been diminished from a love of making mas (as Carnival design and performance are called in the twin-island republic) to a business of mass production.

The master is back for Carnival 2016, however, with an alluring and controversial costume called ‘The Dying Swan: Ras Nijinsky in Drag as Pavlova‘. Performed by Moko Jumbie dancer Jha-Whan Thomas, the portrayal has easily been the most talked about aspect of this year's Carnival, trumping the fiasco that was the International Soca Monarch semi-finals, and the jokes about the poor standard of this year's musical offering and the effect the country's recession is having on attendance at Carnival events.

Minshall is used to causing a stir; his mas constantly pushes boundaries. The last band he brought out in 2006, ‘The Sacred Heart’, provided commentary on societal ills, including the dangers of HIV. The National AIDS Coordinating Committee (NACC) endorsed the portrayal, and in a stunning performance on Carnival Tuesday on the stage of the Queen's Park Savannah, Minshall's performers managed to put a condom on a huge phallus to the shock of some and the awe of others.

In comparison, the outcry over a cross-dressing swan must seem tame, but nevertheless, it has been the subject of heated online discussion.

Journalist Sunity Maharaj, in a guest post at Wired868, described the breath of fresh air that the portrayal has brought to the Carnival landscape:

Just as the heart was groaning under the weight of yet another foreign franchise coming to serve us coffee [the Starbucks franchise will soon be opening its doors in Trinidad], in floats Ras Nijinsky to turn the imperial order upside down before sending it forth, unrecognisable to itself in ras and drag.

When it emerged on stage on Thursday night, the marvel of ‘The Dying Swan—Ras Nijinsky in Drag’, did what Minshall does best. It cut the clutter, silenced the noise, changed the rhythm, re-contoured the imagination and posed the question: What is Mas?

This question was examined in a Facebook thread on Trinidad-born writer Monique Roffey's page, where she asked the question, “Ok Trinis, why is a dying swan at all relevant to Caribbean society? Why all the fuss?” The ensuing comments were reposted with permission on Active Voice — the blogger, Annie Paul, wrote:

Jhawhan Thomas’s rendition of the swan was powerful and eloquent i thought especially with all the inversions and subversions trailing behind it. Europe, Africa, male, female, traditional mas vs beads and bikinis — so many collisions were choreographed into this creation it was thrilling.

Writer, editor and Carnival enthusiast Nicholas Laughlin gave one of the most pertinent explanations of the costume's relevance to a Caribbean space:

I can’t escape the sense that The Dying Swan is Minshall’s meditation on the place — aesthetic, intellectual, emotional — he finds himself in at nearly the end of his career as an artist.

The ballet that inspired the maswork is about the inevitability of death […] It’s a classic Minshall move to have taken this exemplary work of European ‘high’ culture and translated it via two traditional Carnival characters, the moko jumbie and the Dame Lorraine. And through a minimalist but rigorously considered form, a deceptively simple performance by the masquerader, a touch of self-awareness and self-parody (it’s a burly dude in drag, after all), to have made something that his audience can plainly delight in, while feeling the little emotional quiver of recognition that this is an artist’s elegy for his art.

Several layers to ‘the fuss’ – firstly the unexpected return of Minsh, secondly, with the usual ‘difference’ of content and presentation, often quite startling, thirdly the obvious androgyny, and fourthly, that collection and more of content = drama, abstracted, left field, story telling, theatre – our society allows him that stage, his mas, perhaps we need the stories, more stories.

James Christopher Aboud thought that the costume was also significant in that it forced discussion about gender discrimination in the country:

Minshall is an adapter, and the fact that the stilts fail to capture the graceful movement of Pavlova is not the point, although I noticed that at once. He made a connection with something other than ourselves, which is what the mas is supposed to do, and, by that adaptation, made it ours. Pavlova in drag is the original thought here, shocking the ballet purists and entering our transgender debate.

It occurred to me that there might be a sly reference here too to the pisse-en-lit, another traditional ‘drag’ mas in which men portray women to deliberately evoke disgust and disdain–and which may have a fresh relevance at a moment when gender and sexual identity and expression are being vigorously debated and (re)contested.

Writer Judy Raymond made the point that the mas was brilliant both symbolically and functionally. This was the first time that the stilts on a Moko Jumbie costume were altered — in this case shaped to mimic the elongated elegance of a ballerina en pointe — which must have been much more difficult to control compared to the regular, sturdier-looking stilts, though Nicholas Laughlin, who perused the costume up close, says it is “very solidly engineered”. Comparing Ras Nijinsky with the usual costume offerings, Raymond said:

Did you see the others? I haven’t yet this year, but they are almost always a variation on a fancy Indian or a giant clamshell-shaped thing on wheels that the masquerader drags along around/behind him- or herself. […]

Minsh draws on traditions from all over the world–because they’re all ours too–just as he drew on the work of Alexander Calder to produce his human mobiles–and especially stands on the shoulders of mas giants to produce something that is new–a moko jumbie combined with European ballet. And yes, as Eddie says it’s real theatre, and it included androgyny in a reference to one of the issues that this society is only now beginning to address. He doesn’t overestimate the value of originality but no one else understands how to combine the basic mechanical principles and characters of the mas into a new work of art that says something about the world and especially our corner of it now. 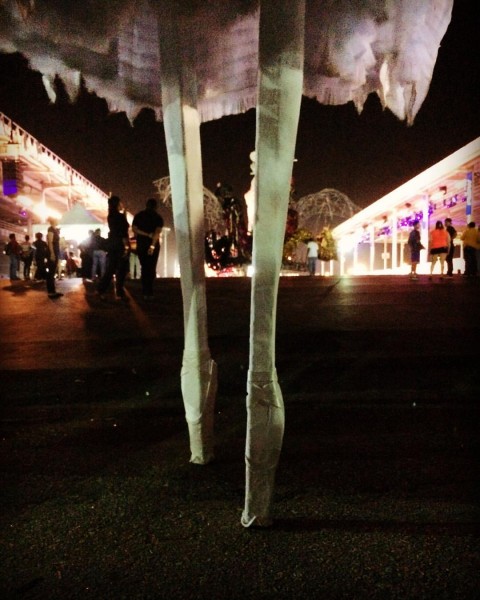 As for brilliance on its own terms, though The Dying Swan isn’t technically innovative (Minshall did a moko jumbie king and queen as far back as 1988, and it’s now standard in the repertoire), and certainly not epoch-defining like Man Crab, I think it achieves the simple but not-so-simple thing that Minshall’s works have long argued is the meaning of mas: to give the performer the means to express an energy, an emotion, an idea beyond what the body alone can do.

In this case, I’d say, it starts in the gorgeous elongation of the masquerader’s limbs and thus the bird-like delicacy of his steps. It’s also remarkable to me how the generally male energy of the moko jumbie is subverted here without sacrificing presence or scale. And I am obviously no Carnival judge, but the scoring system ought to reward those kings and queens that can move entirely through the muscles and energy of their masqueraders, i.e. with NO WHEELS.

No ‘King of Carnival’

Despite all its public attention, Gin Awai didn't particularly think the costume itself was worthy of the title of ‘King of Carnival':

The theatrics don’t translate without the Minshall story. Seems more apt for Cirque du Soleil than first place. Interested to see what more drama would be created in the finals.

I predict more glitter and a blackened bird.

This turned out to be a moot point — Minshall's king placed third in this year's finals, but many were disappointed that there was no surprise spectacle to witness. Back in 1983, when Minshall created a convincingly threatening Man Crab which was brought to life by masquerader Peter Samuel and copped the King of Carnival title, his pristine white canopy was dramatically flooded with red paint on the night of the finals.

Not only did Minshall's 2016 ballerina not win, it was roundly criticised by other veteran mas designers, one of whom won the overall competition and maintained that Moko Jumbie portrayals were not mas. In a public Facebook post, Attillah Springer quickly corrected him:

Dear Mr. Eustace
In 2015 I had the opportunity to work with Trini/British artist Zak Ové to install two eight foot moko jumbie sculptures in the Great Court of the British Museum. […]

Your comments showed such a shocking lack of knowledge and were delivered with such hubris I wondered who had died and made you an authority on anything else but how to drag an ugly lump of shiny empty nothingness across the Savannah stage.

I read things about masquerade that the likes of you would probably never see because apparently you don’t know that the moko jumbie is in fact one of the most ubiquitous forms of African masquerade on the continent.

‘The spirit of Carnival'; ‘The better part of who we are’

Love it or hate it, there was no disputing that the costume elicited a response — which in itself speaks to its success. Actress Martina Laird described it this way:

Towering and proud, beautiful and grotesque, tragic and comic. Sexuality explicit and concealed. An amazing drag statement of ownership made on the very mainstream stage of the Savannah. Such challenge being very much the spirit of Carnival. Not to mention the parody of Eurocentric high culture in Trinidadian context

Perhaps most importantly, according to Sunity Maharaj, the gender bending swan is a symbol of hope for the country's future:

Although Carnival is no longer subject to the ostracism of the past, what it still awaits is our recognition that it might be the better part of who we are: a people joyfully at work, confidently problem-solving, open to change, willing to innovate, happy to collaborate.

Inside there somewhere might be found the principles to organise a functional society.