Pakistani Women Are Reclaiming Public Spaces, One Teacup at a Time 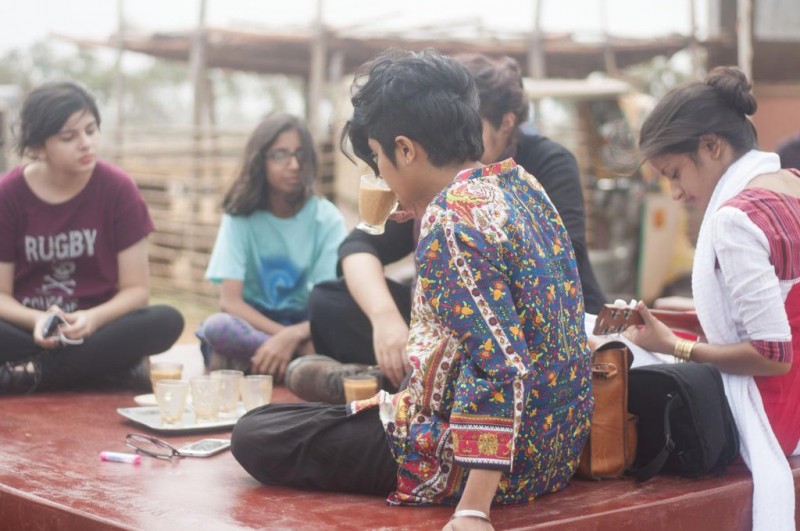 “Girls at Dhabas” is a movement started by two Pakistani women to reclaim public spaces in South Asia. The group's Facebook page describes them as “Desi feminists and women defining public space(s) on [their] own terms and whims”. Dhabas are roadside stalls that serve food and tea that are a traditionally male domain across South Asia. They are frequented mostly by men or women accompanied by a man.

It all began in May 2015, when Sadia Khatri and Natasha Ansari, based in Karachi, started using the hashtag #GirlsAtDhabas, curating photos of women, sent to them on Tumblr. Soon, dozens of women across South Asia began sharing photos of themselves at dhabas, on Twitter and Tumblr, launching a conversation about safe spaces for women. The movement's Facebook community page has now crossed ten thousand members.

What does pleasure mean to you?

It is clear that these girls walk the talk and aren't just about hanging out with their friends at tea cafes. In Pakistan, the movement went beyond dhabas and organised a cricket match in solidarity with girls from the University of Karachi, after the students were attacked by Islami Jamiat Tulaba (IJT), the student wing of a religious political party, for playing a cricket match on college premises.

Bilal Farooqi, a journalist with The News International, tweeted:

Fariha Awan had this to say:

Where “Girls at Dhaba” movement is very cool, I am sure many of us karachiites have had tea at dhabas many times?#HipsterKarachiites

In response, those in the movement have tried to involve women from different classes, especially working-class women, in partnership Awami Workers Party, a left-wing political group in Pakistan.

The Facebook page for the event provided more insight into the meeting:

The absence of women from Pakistan's public spaces represents their systematic exclusion from a social and fully human existence. It is a symptom of an overwhelmingly patriarchal society that needs to be actively resisted…Girls at Dhabas will be co-facilitating a dialogue with the Awami Workers’ Party Isb-Rwp on women and public spaces in Pakistan this Monday in Islamabad. We will be discussing how to start things off in Islamabad, forming a local community around the issue and discuss ways people can get more involved.

As a response to the culture barriers erected by society, “Girls at Dhabas” and similar movements offer an insight into often overlooked resistance movements in Pakistan and across South Asia.