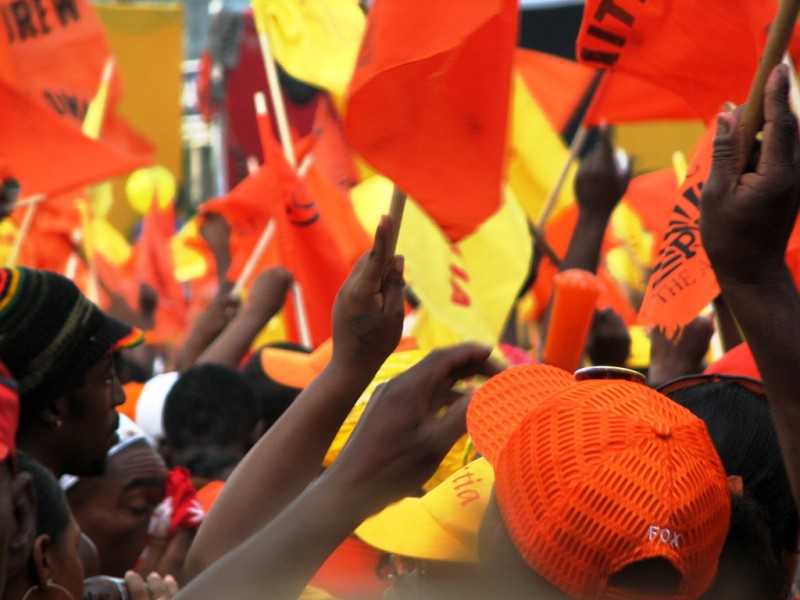 “Into the crowd” at a People's National Party political rally in Jamaica. Photo by Christina Xu, used under a CC BY-SA 2.0 license.

Speculation about when Jamaica's prime minister, Portia Simpson-Miller, would declare the date of the country's 2016 general election was put to rest on Sunday, January 31, when she made the announcement at a massive People's National Party (PNP) rally at Half Way Tree, a bustling section of the capital.

Having opted not to call the election in December 2015 as originally planned, many were impatiently waiting to see when they could make their voices heard at the polls. Now carded for February 25, 2016, this will be the 17th general election for the country — nomination day is set to take place on Tuesday, February 9.

While there had been much speculation that election date would be February 29, the birthday of Edna Manley, wife of Jamaica's first Premier Norman Manley, the date turned out to be one few had mentioned as a possibility: February 25. But as journalist Naomi Francis pointed out February 25 will be exactly 10 years since Portia Simpson Miller became Prime Minister of Jamaica.

While the prime minister quipped that “one good term deserves another”, not everyone was pleased about her untimely move. In the hours leading up to the election rally, many people started to grow impatient. It didn't help that the date itself was not revealed right away:

I would not be surprised if the election date is announced to be February 31.

@Chantexy lol gwan a yuh bed the date put off

To further complicate matters, while the prime minister's party, the PNP, was having its rally, the opposition Jamaica Labour Party (JLP) held a counter event in the former capital, Spanish Town. Airing both rallies simultaneously proved to be a challenge for most media organisations and caused quite a bit of upset:

I have not quite seen a more confusing night for media! Concurrent mass rallies causing confusion!#voteja2016

WHYYYY are we doing this split screen two rally business!? I'm so confused!

While the political repartee was mind-numbing for some Twitter users, others bypassed the talk completely and focused on the entertainment:

Watching the PNP rally on television. I feel like I am losing brain cells by the second.

I'm voting for the DJ #PNPRally music nice tho

While some netizens were of the opinion that image matters, others felt that their fellow Jamaicans were being distracted by bells and whistles:

JLP needs to pay closer attention to the production of their events. Vibes & energy matter. Hire a choreographer & producer #strategy

Long for the day when Jamaicans aren't fazed by political hype and foolery.

In what has historically remained a two-party system, however, one Twitter user saw the election results as inevitable:

Jlp can't be helped really. The can win when pnp decides to lose. And pnp nuh look like dem waan lose like in 2007.

Another noticed a worrying trend:

#Jamaica is devolving to a #oneparty system slowly but surely. I am afraid this is NO cause for celebration.

But the opposition party was not prepared to resign themselves to defeat so early in the game — even JLP spokesman Audley Shaw took a dig at the current government:

There are also spinoff political movements that have been throwing their hat in the ring. As far as the National Democratic Movement (NDM) party is concerned, this year's general election is going to happen 11 months before it's constitutionally due for one main reason — the government will not be able to “face the people” once the next budget is presented. The NDM also pointed fingers at both the government and the opposition over the hole of ever-mounting debt that the country just cannot seem to dig itself out of. The country is currently indebted to the International Monetary fund (IMF) to the tune of over 2 trillion Jamaican dollars (approximately US $16.5 billion).

In a public post, Facebook user Astley Scott felt that instead of playing the blame game, the NDM should be explaining its own vision to potential voters:

For a chance at the polls the NDM needs to say how they would achieve the things they laid out for the government to do. It needs to be realistic methods and not just vague statements. They must also identify the resources and spell out the effect these actions will have on Jamaicans. If they cannot do this they may as well shut up. Seriously hoping to hear their proposed strategies.

Of course, only time will tell which party will emerge victorious on February 25, but one netizen, Gordon Swaby, has been sharing his own online poll in an attempt to predict the results:

#poll How will you be voting in the Feb 25 general elections? #PNP #JLP #JaVotes2016

If PNP wins, it will be their 10th victory at the polls, compared to the JLP, which has won seven elections in the past. Some netizens, however, still feel like they don't have much of a choice. On a comments threat about Simpson-Miller's election announcement, Richard S. said:

It is amazing to see how much people can be bamboozled and deluded. It would be interesting to measure the response from those making a ton of noise, as to how much they have seen a prosperous turnaround in their individual lives.

I don't care much for any political party or politician if there [sic] main goal is not uplifting the poor and providing genuine opportunities for all. Jamaica is in need of a leader who is truly interested in laying aside partisan politics for the greater good of the country. What I witnessed in the video is hyped up bravado and noise akin to a dance hall atmosphere. Is the reason why much of Jamaica has fallen into such moral decay and poverty, because of our acceptance of wanton leadership?