Kazakhstan's Requiem for the Tenge Drowns Out Upbeat President 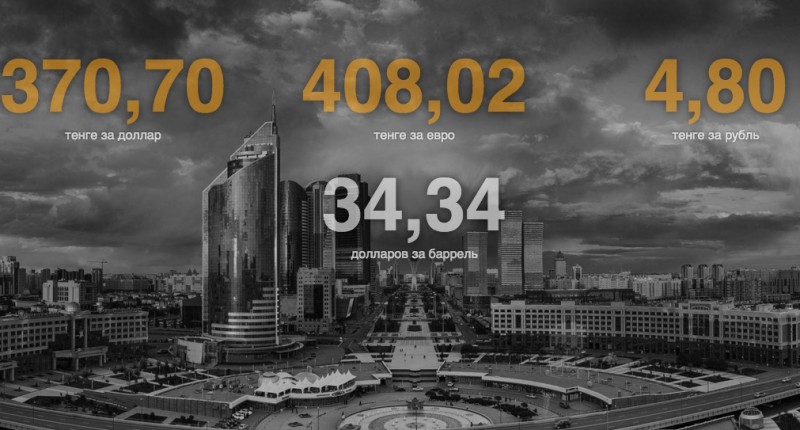 Screenshot from the website oibai.kz showing the value of a barrel of oil and Kazakhstan's national tenge currency against major foreign currencies the dollar and euro.

Clearly things are getting bad for Kazakhstanis when the president is talking about avoiding expensive lemons in the oil-rich country's bazaars — just a few months ago he was telling citizens they could learn not to eat foie gras.

It is difficult to say which ex-Soviet state has been most severely knocked off its stride by the crash in global prices for oil and other commodities, but alongside Russia and Azerbaijan, Kazakhstan is a key candidate.

Credited for years as a regional tiger with a visionary leader in 75-year-old autocrat Nursultan Nazarbayev, Central Asia's strongest economy has truly lost its roar over the last year or so.

The national tenge currency has shed half its value against the dollar since entering into a free float with the greenback last August and citizens are now complaining of rising food prices and falling standards of living.

It was against this background that septuagenarian President Nursultan Nazarbayev advised Kazakhs to “take a deep breath as the yoga people say and forget about the dollar”, informing of them of a trip he had made to “several markets” in the capital Astana last week.

Contrary to the public noise about more expensive products, he said in comments at a pre-election congress of his ruling Nur Otan party, many products were actually cheaper than they were this time last year.

One notable exception to this rule was imported lemons, but citizens could “live without” them, he added.

Like Nazarbayev's remarks last year about foie gras — which many Kazakhs had never heard of, let alone tried — his comments about checking into local bazaars were met with incredulity.

In an online poll of over 300 readers of RFE/RL's Kazakh service half of respondents said they believed Nazarbayev had not been to any bazaars and was just reading from a script given to him by his advisors.

Over 30% of respondents said that Nazarbayev had been ill-informed about the product prices.

Although the country's largest city Almaty has seen small protests over mortgage debt and general economic malaise this year, authoritarian Kazakhstan does not generally do noisy mass gatherings.

Yet a more curious type of protest against the growing cost of living has emerged in the form of a website highlighted in a recent Reuters report:

The site, entitled oibai.kz, shows nothing but updated rates for the ex-Soviet oil producer's tenge currency and the world oil price – both of which have been plummeting – against a gloomy black-and-white photo of government buildings.

The only commentary is a soundtrack of sad piano music, while sharing a link to the site on social media adds an exclamation mark and an icon of a man in a traditional Kazakh hat, his hands framing his open mouth in shock.

Oibai.kz is at least one online resource that is ignoring Nazarbayev's pleas to “forget about the dollar”.

Also persistently if humorously subversive are the posts of Rinat Balgabaev, who receives hundreds of likes from followers every day for his short, acidic posts on the country's economic pains.

Considering that oil has completely lost its value and the sector is unlikely to be resuscitated any time soon, it seems it is time to start exporting organic fertiliser. This is a particularly promising direction, given we are now fairly deep in shit.

These days, fewer and fewer Kazakhstanis appear willing to believe that such shit is the sort that smells of roses.