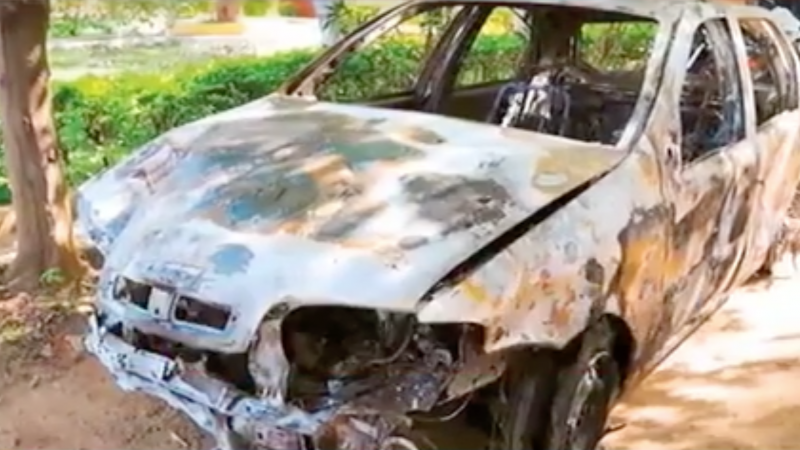 Screenshot of the torched car from which Tanzanian students were dragged out and beaten.

A 21-year-old Tanzanian student was violently assaulted in Bangalore, India, on 31 January 2016 by a mob in a disturbing instance of vigilantism and racism.

The mob, which targeted her after a Sudanese student allegedly hit and killed a 35-year-old woman while driving in the area, beat her, stripped off her clothing and paraded her around naked while the police reportedly watched. The Tanzanian student, who is a second year business student at Acharya College, came to the spot travelling in another car along with four others some 30 minutes afterward and was not even remotely connected to the accident.

Nevertheless, the mob forced the students out, beat the driver and torched their car. They robbed them of their belongings, then proceeded to strip the girl naked. The incident only hit the news on 3 February after she went to the local police and they refused at first to register the case.

The horde was so enraged that they beat someone from the crowd who had offered her a T-shirt to cover up with. When the young woman then tried to enter a local bus nearby, the passengers pushed her back down into the hands of the mob.

The violence sparked a flood of condemnations on Twitter:

Mob beats the Tanzanian girl, strips her, and WHAT IS POLICE DOING THERE? JUST WATCHING.#Bengaluru

Sudanian's car kills Bangalore resident. Locals strip and assault a Tanzanian girl 30 minutes later. This is how racism as a mindset works

Sudanese guy causes accident.
Tanzanian girl caught.
Stripped, beaten.
Because, if you're a misogynist & racist, who has time for geography?

Any action against cops who watched while Tanzanian girl stripped by angry mob in Bangalore? Bangalorewasis, please rage, rage, rage

If you legitimise mob sentiment, don ‘t be surprised if it degenerates into mob justice,mob violence. https://t.co/aMMNDcZY3z …

Racism against people of dark skin in India

According to Bosco Kaweesi, a legal adviser for the All African Students in Bengaluru, the frenzy continued into the night, as local residents went to houses where African students live and harassed them. He said they also stopped vehicles in the street to check if the occupants were African-looking. The African student community is still scared and students are reluctant to come out in the open.

Racism against dark skin exists in India. Black men are dogged by the assumption that they are violent or a criminal, and black women that they are sex workers. As Crystal Kushwaha, an American woman married to an Indian man, explained on question-and-answer site Quora:

[Indians] favor light skin, and in turn, dislike dark skin. Which leads to prejudice against their own race (those with dark skin), as well as others with dark skin.

A video uploaded to YouTube by India Times in April 2015 offers insight into the kinds of encounters with racism some Africans have in India, including being spit at, pointed at, laughed at, called offensive names and treated as dangerous:

One man explains witnessing that racism be passed on from parent to child:

There was a lady and the child was having issues with the mother. And the mother was like come on, chalo, let's go, and the baby was actually disturbing the mother. She turned and saw me coming behind them and the only thing that she could use to scare the child was to tell the child to look at me, said “See! This person is going to take you away. Look at him, he's going to take you away.” What kind of scaring is that? Because a child like that will grow up not wanting to associate with any kind of black person.

‘Travesty of all things humane and Indian’

Social media users also pointed out other factors at play, such as police tolerance for mob justice. Nitin Bangera commented in Facebook:

This Bangalore case of the Tanzanian woman reminds me of many conversations with friends about road accidents, A lot of people I've had hypothetical chats with say that if they ever knock somebody over in India, they'd flee immediately Or flee immediately to the police station even, but they would not stay at the scene at all, because “dude the mob will kill you”
If such incidents happens in Bangalore like places, we all need to rethink what kind of society we are living in.

This is a blatant travesty of all things humane and Indian! The police who refused to take a complaint need to be fired and investigated.

Stripping and parading a young black woman for a made-up reason is textbook upper-caste violence, replicated on the basis of race.

India! Tolerant India! We are a tolerant nation with a thing for parading women naked and torching stuff. Hey, at least we didnt kill her! If this was in Pakistan, Afghanistan, Iraq or some other country, the girl would have been killed. We spared her life! India! Tolerant India!