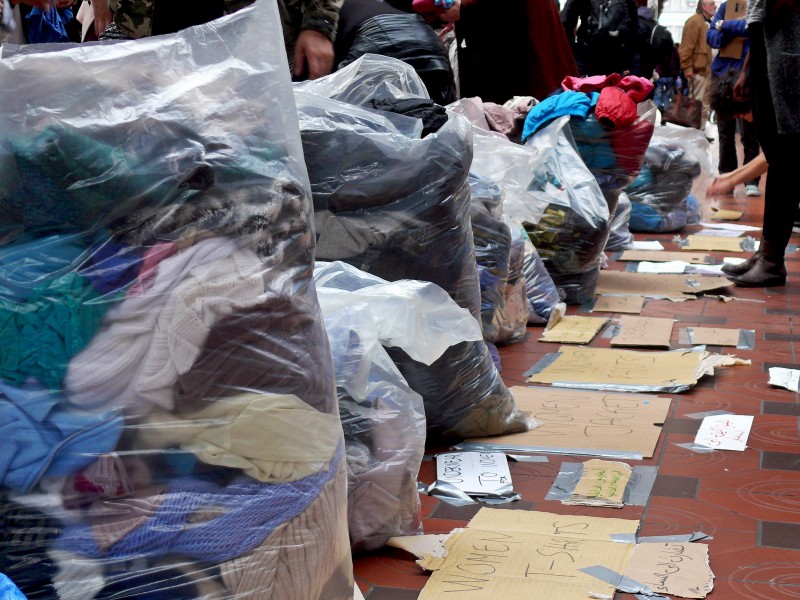 #RefugeesWelcome to Copenhagen: Local citizens of Copenhagen, Denmark, organized a collection of necessities for the refugees from Syria when they arrive at Copenhagen Central Station. September 10, 2015. Photo by Chris Alban Hansen. CC BY-SA 2.0

When the Danish parliament passed the much-debated legislation L87 on 26 January, it unleashed a firestorm of controversy all over social and traditional media that remains little understood and poorly managed by the politicians that championed it.

The legislation is better known as the “Jewelry Law”. But while the duty of the police to search for and confiscate possessions worth 10,000 Danish crowns (about US $1,460) or more has caught almost all the attention, other paragraphs of the law poses a greater danger to the rights and well-being of asylum seekers.

The most overlooked aspect of the L87 law internationally is that asylum seekers must now wait three years instead of one to apply for their spouses and children to join them, which could potentially violate Denmark’s international treaty commitments (as Danish civil servants admitted themselves in drafting warning language into the bill presented to legislators). That's two more years of families being separated by war or insecurity.

The law also requires young men to stay in tent camps, with very limited mobility, despite a chronic surplus of empty housing in Denmark.

Still, the part about jewelry and other possessions is what caught the world's attention. After much debate and uncertainty, legislators exempted wedding rings and other pieces of jewelry with “obvious sentimental value” from L87. “Suitcases full of diamonds”, as Minister of Justice Soeren Pind helpfully pointed out, will not be exempted, however.

The wedding-ring exception did little to calm the backlash. Famous Chinese artist Ai Weiwei cancelled a long-awaited exhibition at the Aros museum, former Secretary General of the UN Kofi Anan expressed his concern and shock, and the British paper The Guardian ran a cartoon depicting Danish Prime Minister Lars Loekke Rasmussen in a Nazi-esque uniform.

On social media, police officer Jacob Nielsen wrote about his anger and despair in a note that has been shared more than 21,000 times:

I did not become a cop to take away people’s own possessions!

Most of all I became a cop because I know that justice is something you have to fight hard for, and somebody has to protect those who cannot protect themselves. Nowhere else can you do that as well as in the police force – when you don’t abuse your power.

I often confiscate people’s things – because they are illegal, or because they were stolen from others or because they can be used to harm others. But I never strip search people or look in their mouths in order to take away THEIR OWN JEWELRY.

…. While doing that my grandparents who were in the Resistance and whom I admire so much, would roll over in their graves because of who I would remind them of.

Danish politicians and diplomats have tried in vain to point out that Denmark still remains a very generous country when it comes to devoting the UN-recommended 0.7% of GDP to humanitarian assistance and development aid — though as much as a third of that is being spent inside Denmark itself, meaning not all of that 0.7% of GDP is going toward supporting populations abroad that are in need. The argument that Danish citizens applying for welfare benefits also are subject to having funds and jewelry confiscated has also failed to make a dent in the negative press Denmark has been getting. Danish industries are getting concerned about the country’s deteriorating reputation.

So why are Danish politicians caught so flat-footed in this affair? Why the inability to explain what they consider a very fair proposal, rooted in traditional Danish values of contributing to the community before asking for its support?

One possibility is that when a country’s self-perception — in Denmark’s case that of being a tiny, humanitarian good-guy underdog incapable of inflicting harm — conflicts with reality, politicians tend to be particularly blinded by how their actions might look to outsiders.

Another possibility is that the right-wing immigrant-sceptic parties are all too aware of the publicity the jewelry law is attracting and are welcoming it. It’s become part of a deliberate rebranding of Denmark as an unattractive destination for asylum seekers that started in November 2015 with government-funded ads in Lebanese papers highlighting the country's strict measures regarding refugees.

The battle for Denmark’s reputation and political identity continues unabated and Danish politicians are learning, again, that doing national politics under an international microscope is a tricky business.