One Photo, One Thousand Words About Post-Apartheid South Africa 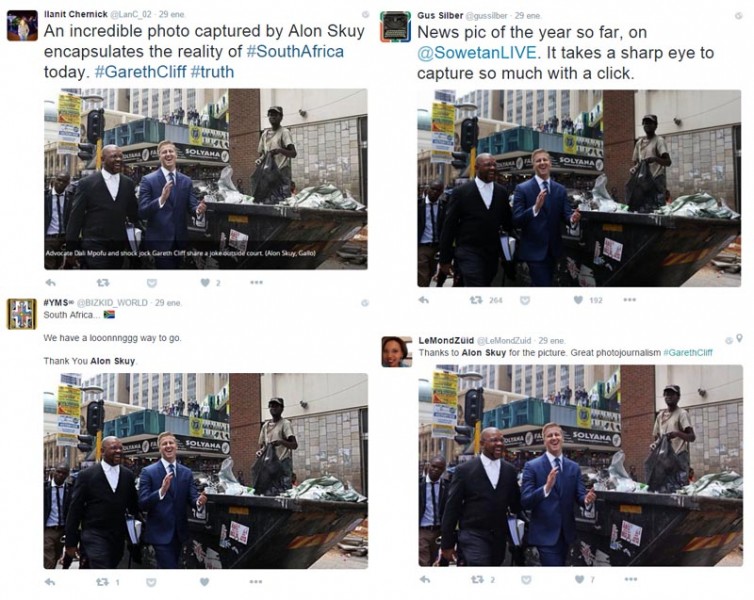 A photo taken on January 26, 2016, outside the High Court in Johannesburg, South Africa, has drawn attention to income inequality in post-apartheid South Africa.

The shot, taken by Alon Skuy, a South Africa photographer working for South African newspaper, The Times, shows a controversial South African radio personality Gareth Cliff with his lawyer, Dali Mpofu, walking near a man who seems to be digging through rubbish.

Following the storm, Cliff was removed from the judging panel for the televised singing contest South African Idols. He successfully challenged his removal in court where the judge argued that the case was about contracts and not racism or free speech.

Cliff, a white South African, was represented in court by Dali Mpofu, a black South African. Mpofu is the chairman of the Economic Freedom Fighters, a militant pro-black socialist party in South Africa.

The photo in question, which has been shared widely on social media, is considered by commenters the best visual representation of post-apartheid South Africa, where income inequality has worsened since white minority rule ended in 1994. South Africa has one of the most unequal income distribution patterns in the world.

#Inequality always in the background & never the focus. It’s up to us to change this #SouthAfrica
Photo by Alon Skuy pic.twitter.com/W61W7y9NPJ

We have a looonnnggg way to go.

That pic by Alon Skuy:A summary of Post-Apartheid SA.

On Twitter, one use asked, making reference to Cliff's lawyer's party, the Economic Freedom Fighters:

Whose economic freedom is it, anyway? The powerful photograph shot by Alon Skuy https://t.co/1w4C91DJTe pic.twitter.com/WevL3YXi4H RT

Shabtai Gold noted that the photo was not staged:

While @fullframeSA praised the shot:

Alon Skuy picture for @SowetanLIVE of Gareth Cliff and Dali Mpofu is photojournalism at its best pic.twitter.com/XStA0n9Tk2

The photo has prompted some to search for more photos by Skuy: