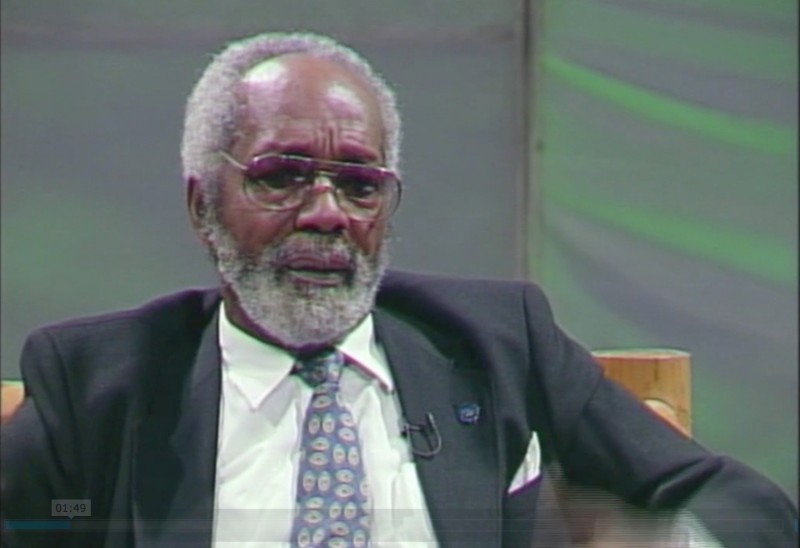 A screen grab of Jamaican artist Barrington Watson, taken from a television interview, “Profile with Ian Boyne”, on Jamaica's TVJ in 2010. The interview was part of a documentary on Watson by the National Gallery of Jamaica, “Barrington: a Jamaican Artist’s Story”.

Barrington Watson, one of Jamaica's most acclaimed painters, died on January 26, 2016 — reportedly from cancer — at the age of 85. A traditional painter who studied at the esteemed Royal College of Art in London, England, Watson was the first director of studies at the Jamaica School of Art and Crafts (now renamed the Edna Manley College of the Visual and Performing Arts), one of the most important art schools in the region.

He was a prolific artist who poignantly captured the nuances of Caribbean life. Upon his death, social media was a chorus of praise for the beauty of his work and the amazing legacy he has left to the region. The Jamaican arts and culture blog Tallawah remembered Watson as “a man of distinction — artist, icon, mentor”, agreeing with his widow that his students would probably miss him most:

By all accounts, Watson lived to tell stories with his paintbrush and inspire others, including Jamaica’s emerging generation of artists. And he was good at what he did. As a rising star in his heyday, he was considered a unique talent among his peers, and the Jamaican art world quickly made room for his extravagant visual appetites and exquisite eye.

The post also quoted former chief curator at the National Gallery of Jamaica, David Boxer, who thought that when it came to realist art, Watson had no equal:

He was the most highly trained artist, and he brought those academic principles to art. Quite simply a display of great competence based on extraordinary drawing skill.

The National Gallery of Jamaica Blog posted two tributes to Watson, the first of which talked about his education and accomplishments:

[Other than] the prestigious Royal College of Art [he] attended several other major European art academies, including the Académie de la Grande Chaumière in Paris and the Rijksacademie in Amsterdam. He returned to Jamaica in 1961 and quickly rose to prominence as a major artist in post-Independence Jamaica. […]

Barrington chaired the Bank of Jamaica art collection in the mid-1970s and operated several art galleries: Gallery Barrington, which has existed in several incarnations since 1974, and the Contemporary Art Centre, which was active from 1985 to 1998. His home in the parish of St Thomas, Orange Park, is recognized as a heritage site. It is part of a former coffee plantation and it has, since he bought the property in 1968, served as the location of his main studio and a meeting place for artists and art lovers. Barrington left Orange Park to the Nation in 1994.

Essentially an academic realist, Barrington explored a wide range of themes and genres in his work, including history painting, genre, portraits and self-portraits, nudes, erotica, the landscape and the still life, ranging from the intimate to the epic and all interpreted with his unique painterly sensibility. Barrington insisted on being recognized as an artist first and as a Jamaican artist second but most of his paintings were inspired by Jamaica and its people and he produced some of the most iconic images in Jamaican art history, such as Mother and Child (1958-59) and Conversation (1981) in the National Gallery of Jamaica Collection. Although he is best known as a painter, Barrington was also an accomplished draughtsman and printmaker.

The second post by the National Gallery of Jamaica was an announcement that it has “mounted a special display of some of Barrington’s key works from our collections”.

Many netizens used Twitter and Facebook to share the news of Watson's death and express both their grief and their admiration for the man and his talent.

One Twitter user made the point that Watson was responsible for grooming new generations of Jamaican artists:

Others shared images of his paintings:

One Twitter user shared a touching anecdote that spoke to Watson's love of art — and his humility:

Couldn't afford the canvas but ♥ Mother& child so much he signed my picture version. #Jamaican #BarringtonWatson ♥ pic.twitter.com/FKMu3ndDKV

While one Jamaican mother was determined to pass on Watson's legacy to her daughter:

In a fitting Jamaican farewell, a Twitter user, referring to the local folklore of “duppies” or “spirits”, said:

Barrington Watson had been honoured with several national awards during his lifetime, including Jamaica's Order of Distinction, Commander Class (1984), the Order of Jamaica (2006), and the Institute of Jamaica’s Gold Musgrave Medal (2000). A special retrospective of his work was exhibited at The National Gallery of Jamaica in 2012 as part of the gallery's recognition of the country's 50 years of independence from Great Britain.