Following Prisoner Deal, Iranian Nobel Laureate Calls on Tehran to ‘Make Peace With Its Own People’ 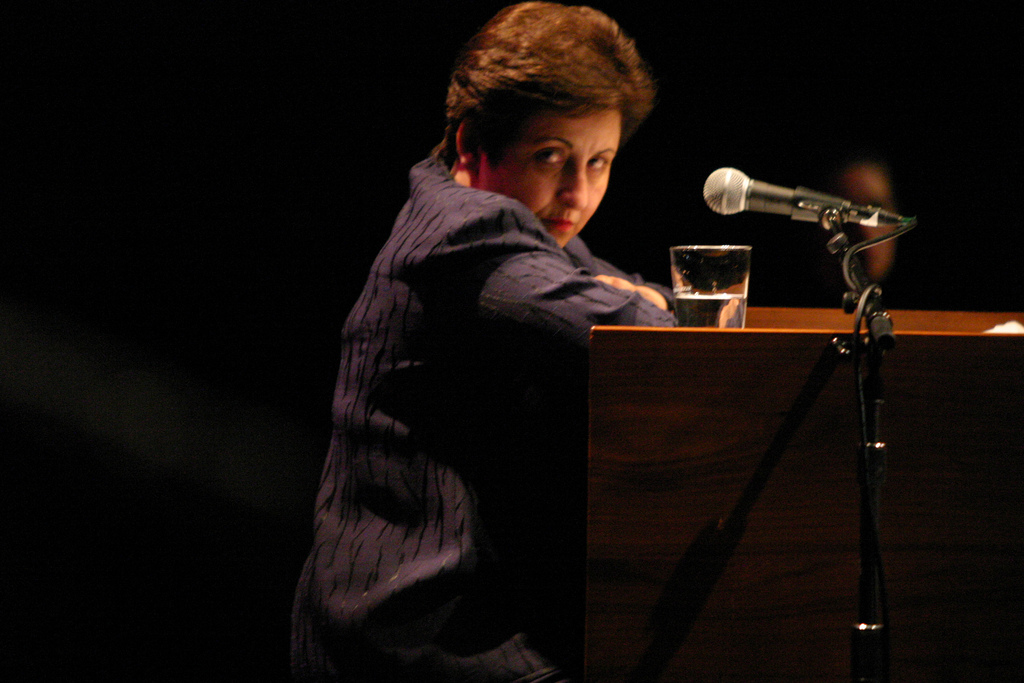 Shirin Ebadi gives a lecture on Islam, democracy, and their foundations in human rights at the University of California, Santa Barbara. Photo by Ana Elisa Fuentes on Flickr. (CC 2.0.)

While expressing joy at Iran’s recent release of four imprisoned Iranian-Americans, Nobel Peace laureate Shirin Ebadi has called on the Iranian government to “make peace with its own people,” now that it has shown the ability to negotiate and compromise with its adversary, the United States.

“The Iranian government has made peace with a country that was its enemy for 37 years and I cannot help wonder why it cannot make peace with its own people,” the 2003 Nobel Peace Prize winner said in her January 18, 2016, open letter to President Hassan Rouhani.

If the Supreme National Security Council can release a journalist who has been taken hostage as ‘sweetness’ for reconciliation with the US, why can it not release a university professor and a female artist, such as Zahra Rahnavard? If the Judiciary can release Saeed Abedini, whose crime was his religious belief, due to his dual nationality, why does it not take any action to facilitate the release of Mehdi Karroubi whose only crime was to protest [the 2009] election’s results? If Mr. Zarif could negotiate with superpowers, such the US, to release some Iranian businessmen from US prisons, why does he not do the same for prisoners of the 2009 events?

Ebadi, who is the founder of the Center for Supporters of Human Rights, added: “The Supreme Leader, the Judiciary, the Supreme National Security Council and yourself are well aware that in the absence of an independent judiciary, political prisoners and prisoners of conscience are deprived of a fair trial and, in fact, they are held hostage by the security forces.”

Ebadi’s letter was in response to the US-Iranian prisoner exchange on January 16, 2016. The government in Tehran released four Iranian-Americans, including Washington Post reporter Jason Rezaian, who had been held in prison for 18 months on politicized charges. In return, the US pardoned, and in some cases commuted, the sentences of an Iranian and six Iranian-Americans.

Ebadi criticized President Rouhani’s record on human rights and said in remarks directed at him, “I am sorry that other prisoners who only hold Iranian citizenships should remain in prison. Have you forgotten your oath to preserve the Constitution? Which political prisoners and prisoners of conscience in Iran have been tried openly and in the presence of a Jury?”

“I hope the day to make peace with Iranian people will come soon and on the ‘sweetness’ of that day we may witness the release of all political prisoners and prisoners of conscience in Iran,” she concluded.

The International Campaign for Human Rights in Iran, one of Global Voices’ partners, also issued a statement calling on Iran to free the many prisoners of conscience held in Iranian jails for their peaceful activism and beliefs:

Now, many Iranians are asking if Iran’s rulers will ever make peace with their own people, and release hostages held by the security forces, including Omid Kokabee (a young genius), Abdolfattah Soltani (a lawyer), Narges Mohammadi (a civil rights activist), Bahareh Hedayat (a student rights activist), Issa Saharkhiz (a journalist), Saeed Madani (a political activist) and dozens of other prisoners?