Once a Prisoner in Cuba, a Transgender Cuban Woman Vows to Never Return 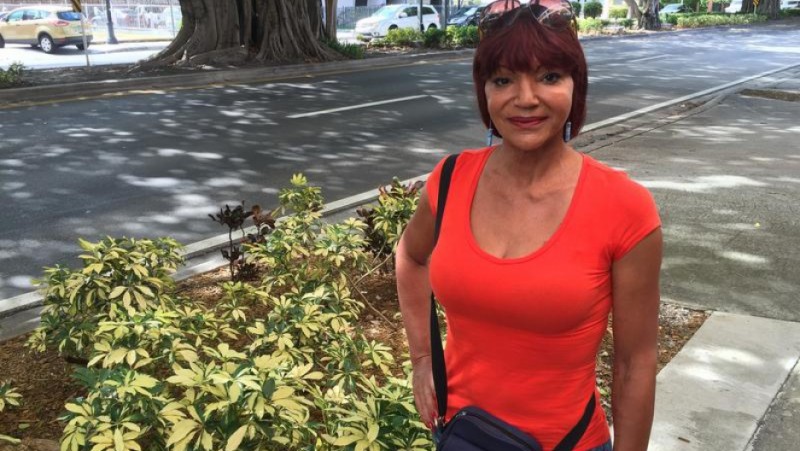 This article by Nadege Green for The World originally appeared on PRI.org on January 28, 2015, and is republished here as part of a content-sharing agreement.

Ana Marrero pulls back her shirt sleeve and holds out her left arm.

“In Cuban prisons, I tried on various occasions to kill myself with knives,” she says.

“Uno, dos, tres, quarto, cinco, seis, siete, ocho,” she counts in Spanish. She counts the healed scars on her forearm. They look like horizontal tally marks.

These days, it’s a lot easier to travel between the US and Cuba, but some Cubans have no interest in going back to their homeland.

That’s especially true for transgender Cubans, like Marrero, 54, who lived in Cuba in the '60s and '70s. Back then, the Cuban government had very rigid gender expectations and it regularly sent gay and transgender people to prisons and labor camps for leading a so-called “deviant lifestyle.”

“It was horrible,” says Marrero, who fled Cuba in 1980 during the Mariel boatlift. “We couldn't have a life. In those days the Cuban government was very backward and cruel about homosexuality.”

She says gay and transgender prisoners were at the mercy of cruel guards.

“I met a gay man who had naturally large breasts and that bothered the prison authorities so much that they operated on him to get rid of those breasts,” she says.

Marrero identified as female from a very young age. In Cuba, she would wear her mother’s clothes and makeup — and she paid the consequences.

That Cuba, the Cuba Marrero knew, is changing.

Mariela Castro, President Raul Castro’s daughter, is director of the government’s National Center for Sex Education and she’s a leading advocate for the gay and transgender community in Cuba — even leading anti-homophobia marches in Havana.

In 2013, Cuba’s parliament passed a law forbidding discrimination in the workplace based on sexual orientation. Mariela Castro, who is also a parliament member, voted against the ban because it didn’t include protections for transgender people.

Since 2008, Cuba has offered free sex changes through the public health system.

“In Cuba this is a slow process,” Castro told Daily Xtra, a Canadian website that covers the gay community. “We are trying to create a new society, but changing people’s conscience can be a slow process.”

Castro added that in Cuba, homophobia and transphobia are still widespread.

Mariette Pathy Allen, an American photographer, has been photographing transgender women in Cuba since 2013.

Allen says that for the women she's met, “it’s a very hard life.”

Despite some of the progress happening in the LGBT movement in Cuba, many of the trans women Allen photographs say they’re still harassed and detained by police. They also say they can’t get jobs.

“A lot of them have no choice but to become prostitutes,” says Allen.

And there are the threats of violence, especially outside Havana.

Earlier this year, a trans woman was stoned to death near the western city of Pinar del Rio, according to Cuban media reports. Activists in Cuba called it a hate crime.

Still, many point to Mariela Castro as a beacon of hope and perhaps a sign of long-term change for trans Cubans.

In Miami, Marrero says she knows there’s an evolution happening in Cuba.

“Mariela Castro has changed and opened up a lot of things there,” she says. “If Mariela Castro had been there when I was living there, maybe I wouldn't have had to come here.”

Marrero says the transphobia she experienced living in Cuba, she also experienced here early on in Miami’s Cuban exile community.

She says Cuban American police officers used to stop her and accuse her of being a prostitute. They questioned her gender and made unwanted sexual advances toward her.

“I felt very powerless,” she says.

“Today I can walk more freely. I can go where I want. And I can be who I want to be, without facing so much discrimination,” she says.

And even with US and Cuba relations normalizing now, she still can’t bring herself to ever go back home.

“I suffered too much trauma in Cuba. It would cause me too much panic to return there. I wouldn't go back, even for a short visit.”

Her resolve hardens when she looks down at her arm. The self-inflicted scars left from her life in Cuba’s prisons are a permanent reminder of a time when she could not be free — could no be herself.