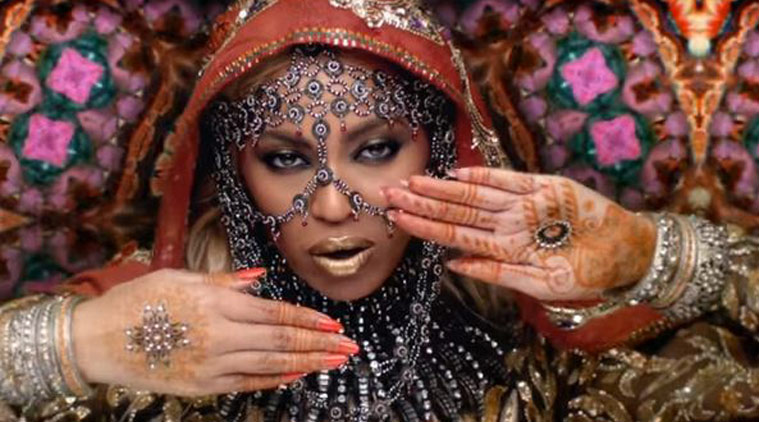 Beyonce in the video Hymn for the Weekend. Screenshot from Youtube

A new video released by British rock band Coldplay featuring American singer Beyonce has run into controversy for its alleged appropriation and stereotyping of Indian culture.

The clip sees Coldplay frontman Chris Martin reprise the role of a foreign reveller dancing and singing with Indian youth during what appears to be Holi, the Hindu festival of colours, while Beyonce is shown elaborately dressed as an Indian rani, or queen.

Among the characters that feature as extras in the video are a godmen (sadhus) and a Bahurupi child depicting Lord Shiva.

Nishita Jha writes at The Wire that Martin behaves “like a classic white-dude backpacker in that he only notices saffron flags and bearded holy men”:

Coldplay’s brand new video for the song ‘Hymn for the Weekend’ features what one imagines are Martin’s favourite bits of India: Mumbai taxis with colourful interiors, dilapidated buildings, holi, and the occasional child dressed as a monkey or a blue god. Beyonce also features on Coldplay’s album and appears in Martin’s vision as an angel, or its Indian equivalent: a Bollywood queen.

Perhaps to better understand the debate growing around the clip it is worth revisiting Edward Said’s concept of Orientalism:

Orientalism can be discussed and analyzed as the corporate institution for dealing with the Orient – dealing with it by making statements about it, authorizing views of it, describing it, by teaching it, settling it, ruling over it: in short, Orientalism as a Western style for dominating, restructuring and having authority over the Orient.

As Richard King argued, Said’s conceptualization deals with the “complicity between Western academic accounts of the nature of ‘the Orient’ and the hegemonic political agenda of Western imperialism.”

In the 21st century this “hegemonic political agenda” could be seen as finding its logical continuation in cultural imperialism by means of appropriation and stereotyping propagated through music and other art forms.

Amid perpetuations of stereotypes such as the turban-wearing Sikh cab driver stereotype, it is Beyonce's representation as Indian royalty that some have found most problematic.

In addition to the American artist's gestures, opponents of the clip have pointed to the fact that popular Indian actress Sonam Kapoor —  a bona fide Bollywood star — is relegated to an eight-second cameo in the video, effectively playing second fiddle to the former Destiny's Child singer.

In the days following the video's release, Twitter hosted a storm of angry comments from Indians upset by their country's depiction:

Beyonce's video is a problem because it's reductive, and uses India as a prop for capitalist gain. A land and culture she has no right to.

No thanks for the bundle of stereotypes @coldplay. No wonder then that #India will be known as the country of snake charmers & sadhus.

coldplay should now take down the video and re-upload it with a sideshow of hate tweets so the world can actually see the real india.

So upset by @coldplay using my culture as a prop for their music video. India isn't just street kids and exotic women. #HymnForTheWeekend

Still, others have played down the video's implications:

All this “cultural appropriation” talk. If anything, the vid showcases the beauty of India. No need for all the drama. #Coldplay #Beyonce

@chanaaaj I like it. It captures the spirit and essence of India and its people (not the elite). Of course there is artistic license.

#Beyonce guilty of ‘cultural appropriation’ in the #Coldplay video? If dressing Indian makes her guilty what abt Indians who dress Western?

In an opinion piece on Indian Express, Aditi Anand wrote that she does not find the video problematic.

She argues “as the Bollywood actress ‘Rani’ [Beyonce] fits in seamlessly. Yes, it’s not her culture, but, so? That doesn’t mean she can’t play a role in her own song.”

She also says that though there may have been cliched representations of aspects of Indian culture like Holi, all that was shown is still integral to Indian culture.

Martin’s video shows India in all its glory. The peacocks, the periscope, the puppets, the behrupiyas, the yellow and black cabs with colorful interiors, everything shouts India.

In a country of over a billion people and with a myriad of distinct religions and cultures, it is perhaps unsurprising that the video directed by Ben Mor has generated a diversity of opinions.