Crude Journalism? Nigerians Demand an Apology From The Economist for Ex-President ‘Buffoon’ Insult 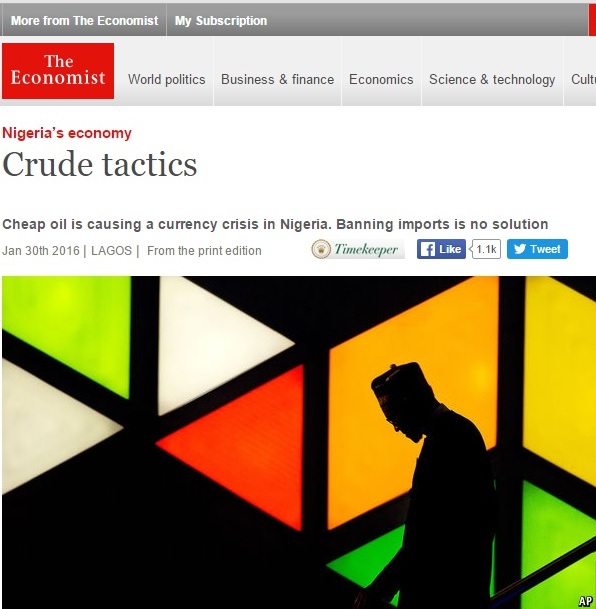 Nigerians have pilloried The Economist, after the magazine described former Nigerian President Dr Goodluck Jonathan as an “an ineffectual buffoon”in a recent article about the country's worsening economy.

The moment of offence was as follows:

In the eight months since Mr Buhari arrived at Aso Rock, the presidential digs, the homicidal jihadists of Boko Haram have been pushed back into the bush along Nigeria’s borders. The government has cracked down on corruption, which had flourished under the previous president, Goodluck Jonathan, an ineffectual buffoon who let politicians and their cronies fill their pockets with impunity.

Dr Goodluck Jonathan was defeated by General Muhammadu Buhari in the presidential elections last year. Jonathan's concession to his rival Buhari was an unprecedented move widely praised as keeping the peace in Africa's most populous country.

Since then Buhari's government has been battling corruption and a weak economy ever since his inauguration — legacies of Jonathan's reign as well as those of countless other administrations that went before him.

Although The Economist article focused on the effects wrought by plummeting global crude prices on a country that relies almost exclusively on oil revenues for economic growth, the publication's passing insult of Jonathan ignited a storm of indignation on social media.

Marvelled at the verbal buffoonery of @TheEconomist. It's almost like it's personal. I thought you people had style guides. #Inappropriate

The Oracle, a Nigerian lawyer and poet, described the term as “derogatory”:

Derogatory , and to borrow from my friend, Molara Wood, paternalistic undertone of the insult. If the economist had set out to do a robust 2

The same tweep noted an implicit racial slur and double standards, given that The Economist rarely accords such insults to leaders in the Western world:

PM Brown was at sea when the UK economy went pearl shaped. Tell: did you ever describe him as an “ineffectual buffoon” @TheEconomist?

It is NOT OK, in fact, it is condemnable for The Economist to describe any leader using the words “ineffectual buffoon”. It is even more intolerable that they feel it is ok to use such words on (only) African leaders.

The Greek economy crumbled before our very eyes but The Economist did not speak of the Greek Government in such a manner. Many other European leaders have made grave errors and implemented banal policies but The Economist has still not referred to them in such a denigrating manner. Even the UK Government recently let British people down with the Google tax deal and neither George Osborne nor David Cameron has been called names.

The CNN once called Kenya a terror hotbed and had to retract their malicious statement and issue an apology to the African country. This happened because Kenyans refused to tolerate the stupidity of a major western media outlet. In the same manner, Nigerians must rise in unity across party partisanship to condemn this tomfoolery.

This nonsense must stop and will stop now.

But some were of the opinion that Nigerians were complicit in this disregard for their leaders by foreigners. Ronald Nzimiro, a company executive in Lagos asserted:

You people are vexing because that one was called “ineffectual buffoon”. All the ones you people call him here and in your minds nko? Shior!

Another Twitter user also noted that GEJ — Goodluck Ebele Jonathan — had been called worse in his time:

Dele Olojede called GEJ an Imbecile, Omojuwa called him a Pig. Why should I worry when @TheEconomist calls him whatever? #Intrepid

While others cautioned against overreaction:

There are far reaching issues to grapple with in that article than GEJ being called an “intellectual buffoon”. But by all means….

I agree The Economist was impolite in using the term “intellectual buffoon”, but that's not what the write-up is centered on.

As debate over the Economist's own “crude tactics” continues, however, calls for an apology from the paper to draw a line under the controversy are receiving increasing traction:

Dear @TheEconomist I am of the deeply considered opinion that you owe President Jonathan and Nigeria an apology pic.twitter.com/HUtwPkmihx