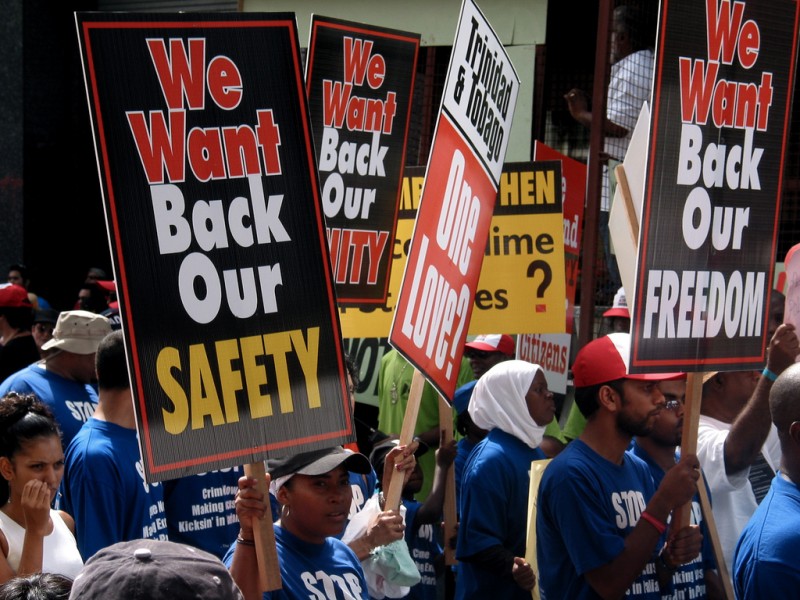 “The Death March, October 2005″ — Citizens of Trinidad & Tobago took to the streets to protest the spike in murders throughout the country. Photo by Georgia Popplewell, used under a CC BY-NC-ND 2.0 license.

On the morning of Thursday January 28, part of Trinidad's capital city was on lockdown as police sought to capture an armed bandit who had broken into a nightclub, intending to rob the popular lounge of its nightly earnings. There were reports that robbers had initially broken into a restaurant situated below the nightclub, but no-one has as yet been detained in connection with that incident. However, it now appears — at least judging from a leaked police video which Global Voices has chosen not to show — that the nightclub burglar, who was arrested after a four-hour standoff, was linked to the other robbery as well.

@tv6tnt Police have captured and extracted the suspect in this morning's Town Restaurant burglary pic.twitter.com/zwiftMT2qS

The incident attracted the interest of netizens, many of whom were commenting on race-related aspects of the case. Trinidad and Tobago's two main ethnic groups are Indian and Black, and in order to gain political leverage, the country's two main political parties — the United National Congress (UNC), now in opposition, which attracts a primarily Indian support base; and the People's National Movement (PNM), now in government, which has a strong Afro-Trinidadian following — have been accused of fostering tribal politics.

The trend was particularly glaring under the last UNC administration, when then-prime minister, Kamla Persad-Bissessar, declared a national state of emergency. The reason? Ostensibly to deal with elevated levels of violent crime. Police were made to go into designated “hotspots” like the economically disenfranchised urban community of Laventille and arrest hundreds of young, black men, supposedly for gang-related activities, only to have to release them for lack of evidence. Many saw this move to be a serious encroachment on citizens’ rights and a dangerous foray into ethnic stereotypes. At the time, The Eternal Pantomime blog wrote:

The first thing that bothered me about the SoE was its ad hoc implementation and punitive tenor. To date we dont know why it was called. Numerous reasons given and almost 8000 people detained, mostly Afrotrinbagonian. 9% of the black male population tossed in cells with no evidence or reason for their arrest. This SoE showed me that this govt was very comfortable relying on stereotypes to run the country. It also showed me that a significant portion of the population: members of the middle and upper classes, many of Indo or Euro origin were quite happy to believe that the crime problem was caused strictly by young, single-parent men who resemble John Sandy [the then-Minister of National Security, who is black] and that crime and criminal behaviour had nothing to do with them.

Years later, these racial stereotypes seem to be more ingrained. Of course, a few social media users who shared the police video — which shows the handcuffed suspect being restrained on the ground, answering a series of questions as officers retrieve the stolen money — wondered whether the modus operandi of the police, including their recording of the arrest, was legal, but others were more interested in what colour the suspect was and which community he hailed from. In the wake of the online vitriol that ensued from a segment of Trinidad and Tobago's Indian community after two Afro-Trinidadian schoolboys were murdered on January 22, this robber's ethnicity was now a hot button issue.

On the public Facebook page of the political party United National Congress, Marisa V. Ramlogan posted an update about the robbery and subsequent arrest. Hucil George, who is black, soon commented:

Hats off to the police for a good job.When they do something good,we most praise them. No disrespect to the Afro Trinis but i am almost 100% sure the bandit is a lil black boy.What a shame .

Avonelle Hector Joseph then posted a photograph of the man, who is clearly of East Indian descent, and Marcus Williams asked:

Actually he is of East Indian decent but why even bring race into it in the first place? Isnt it sufficient to say he is a bandit and that the TTPS did well in apprehending him?

I have since made a gesture of admittimg [sic] my mistake ,but i know 99 % of all banditry is of my group.

Unsurprisingly, his figures are not rooted in fact.

Anybody on UNC FB rejoicing over the capture of the 51 Degrees bandit?
I know how they have an equal opportunities approach to crime, nah…
‪#‎CrimeHasNoEthnicity

Commenting on the police tactics in the leaked video, she added:

When Police hold black suspects they does move as polite? Ask plenty questions and thing?
I asking, eh.

Other ethnic communities in the country have, in the past, pushed back against stereotyping and have been supported by members of other races in their campaign. Perhaps in time, this kind of online activism in which netizens speak out against race-based labels and speak up with pride for their own ethnicities, will counteract the negative images that some factions are trying to instil. After the two Laventille schoolboys murders, for instance, there was a slew of positive imagery about both the school and people from the area. This public post showed a photo of a young man in scrubs, saying:

Vernie Barrimond posted a message of hope and solidarity on the school's Facebook page:

Alot of people think because the school is located in laventille nothing good can come out from there. But thats a misconception by negative people.