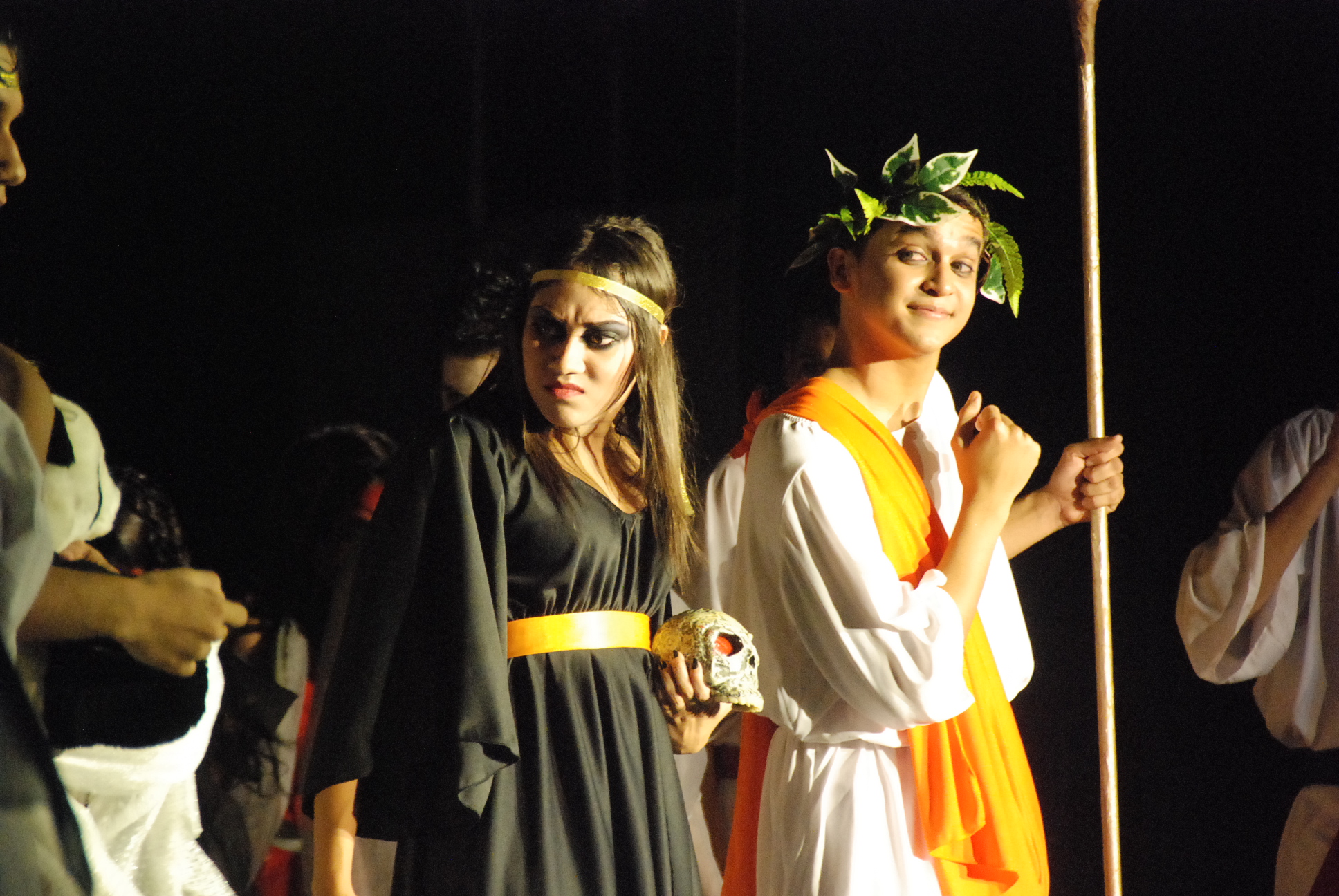 In a mirror-lined room of about six by four meters some twenty Venezuelan adolescents are preparing themselves for a new personal challenge. Although they're working as a team, for these young people—many with voices are still riddled with hormones—this is an immense adventure, and one which is creating profound change in their lives.

“Everything we're experiencing is a huge challenge that makes us better”…”At my house, they're all surprised at how much more self-assured I've become”…”I can stand up for myself better in class, I've lost a lot of my fears.” “We're moving beyond the frivolity of our own generation and are involved in something truly serious…”.

These are some of the sentiments expressed by the young people in the room, most of whom are still in high school, or “bachillerato,” as it is called in Venezuela.

The first thing you notice is the diction and manner of expression of those who make up the cast of the Mythological Hýbris theatre group. Here, you don't hear what is known in this South American country as “mandibuleo,” a complicated way of speaking used by certain divisions of middle- and upper-class youth, where shortened words abound and certain syllables and word endings disappear completely. Here it's the complete opposite: there's an emphasis on vocalization and respiration by the founder and director of the company, José Enrique “Chely” Escalona.

Here, you don't hear what is known in this South American country as “mandibuleo,” a complicated way of speaking used by certain divisions of middle- and upper-class youth, where shortened words abound and certain syllables and word endings disappear completely.

“Hýbris was born in February 1996. It's the result of a syncretism between my two great passions: Greek mythology and psychology,” Escalona says. He graduated in psychology from Caracas’ Universidad Católica Andrés Bello in 1998; his passion for the Hellenic world came much earlier, when he was hardly 12 years old.

But this theatrical experiment of nearly two decades has an extra ingredient. It's not about simple adaptions or reproductions of the classics. From the group's beginnings, Escalona made sure to add his personal stamp, in addition to being the author of all of the works brought to the stage.

“I'm blending theatre with the analytical psychology of the Swiss [psychologist] Carl Gustav Jung, who talks a lot about archetypes and studied Greek mythology. Archetypes are seen as a ‘combo’, so to speak, which are the sensations or emotions that predetermine certain behaviors at the collective level, and influence the crowd as much as each individual,” Escalona explains as they take a break from rehearsals for the revival of “The Pleiades,” which is focused on the place where Hýbris was born and still lives—the neighborhood of Los Corales in the coastal town of Caraballeda in the Vargas state, some 40 kilometers north of Caracas.

The company works with archetypes representing the Greek gods, and which, like them, predetermine certain behaviors. In representing these archetypes, the cast members derive a special enrichment from a therapeutic psychological perspective. “There has to be a benefit to the actors in their everyday lives as they prepare their character: how he feels, how he thinks, how he moves,” Escalona adds.

The current generation is labelled the kings of technology and social networking. But it's “an ocean of information with a millimeter of depth,” according to its critics. In the case of Hýbris, José Enrique Escalona seeks to break these habits and push his charges to investigate and study hard in order to prepare each production.

“I'm not a conformist, and I don't want them to be conformists. Despite their young ages, I demand a lot from them, I know. But it gives me satisfaction that I'm taking them away them from today's frivolous and superficial world. They have to follow a path as an actor called the “archetypal work,” which is my creation. They have to investigate the myth in question. Look at various authors. And search for a totem animal that represents it. They have to know the animal and its habits in order to later apply it to creating the character,” says Escalona.

Many members of the theatrical group, like their director, recognize that the challenge requires a significant intellectual effort, but that it comes from a place of pleasure: They have to enjoy it despite the deep psychology that they must confront, in some cases, from age nine.

“We situate ourselves in somewhere in the middle, between the methods of the Russian [director] Konstantín Stanislavski, which demanded that the actor ‘involve himself too much’ with the character, and those of the German [playwright and director] Bertolt Brecht, who proposed the complete opposite: that is, extreme distance,” explains the man who christened his creation Hýbris, which means “hubris“—”the arrogant excess of one who forgets the human condition and defies the will of the gods, who then end up cruelly hurting the guilty.”

According to Escalona, the “happy medium” between the two dramatic schools is that it allows for critical feedback between the role and the person who assumes it, in order to achieve the growth and individual learning which is one of the great objectives of this adventure in the performing arts, whose alumni include Alejandra Oraa, presenter of CNN Spanish, and actor Willy Martin.